The new poster features the anticipating tagline, ‘Summer Is Coming’. It is noticeably inspired by hit television show Game of Thrones.

Games of Thrones is a popular TV show is known for their symbolic tagline, ‘Winter is Coming’.

Will Baywatch’s Summer live up to Game of Thrones’ Winter? 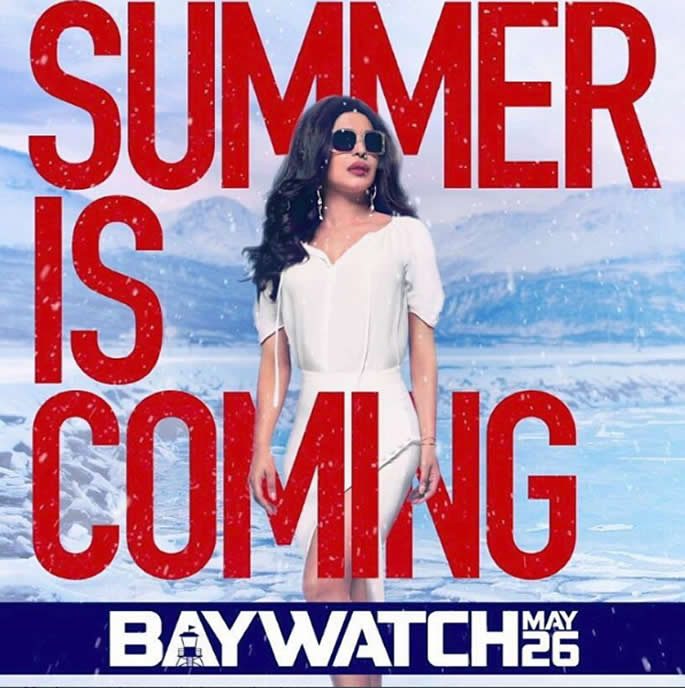 Dwayne ‘The Rock’ Johnson also posted his own Baywatch poster to promote the film that is set to release in May 2017.

When asked if she will bring co-stars Dwayne Johnson and Zac Efron to India, Priyanka says: “We are hoping so because we are doing a big promotional thing around the world and they know how important India is to me.

“We are having those conversations, but we haven’t started because it is not going to release until May. So, marketing will only start a few months before that. But the wheels are in motion.”

She adds: “I would bring all of them here. I speak so much about India and they are so curious about coming here. A couple of my friends are coming next year and I am sorting out the trip because I am our ambassador.”

After the release of the Baywatch trailer, it faced a backlash from fans as Priyanka only featured in one shot.

“They don’t want to give out the best part of the film. It’s a publicity plan that they had for the trailer. Priyanka is the main antagonist and she has a fabulous role in it.”

Baywatch’s second trailer features more of Priyanka. She is shown as an avatar giving the other Baywatch lifeguards a hard time.

Watch the Trailer for Baywatch here:

Priyanka has appeared on many awards shows, red carpets and talk shows in Hollywood to promote the new film. She also talks about her new series of the hit ABC TV thriller, Quantico.

Winning the award two years in a row, Priyanka thanked her American fans for voting and accepting her. The Bollywood actress also recently suffered a concussion on the set of Quantico but has now fully recovered.

“She’s a tough chick. She said she’s sore, but she took a few days off and rested and was back at it. What a trooper! It’s a bit scary, but it was thankfully nothing serious. I don’t know what is going to stop her from doing her own stunts.”