Police Hunt for Pakistani Man who stabbed his Wife and Baby

A Pakistani man attacked his wife and young baby and attempted to murder them at an address in Feltham, UK. A police hunt has started to track the man down.

"He didn't injure the other kids. He tried to kill her and kill her son"

A police hunt is on for a Pakistani man, named as Rehan Khan after he stabbed his estranged wife and an 11-month-old baby boy.

The 25-year-old Pakistani national attacked the mother and child at an address on the Oriel housing estate in Feltham, South-West London around 7.00pm on Monday, June 4, 2018.

The baby is said to be in a critical condition while his mother is recovering from the horrific attack on them.

Khan had been reported by his wife for trying to strangle her and domestic violence against her.

He was facing deportation from the UK after his application for a UK Visa was rejected five days ago.

A friend named his wife as Salma who is aged 32 years-old and said to be a British national but originally came from Belgium.

So, in some kind of ‘revenge attack’, Khan attacked Salma and their baby with a knife.

“I saw him run away, he ran so fast. I just saw blood. He carried on to the motorway.

“He didn’t injure the other kids. He tried to kill her and kill her son, of course [her other sons] said “don’t kill my mummy”.

“She didn’t even have time to raise a panic alarm. she didn’t give that chance to be rescued.”

The friend then explained how Khan was domestically violent towards Salma, saying:

“He was not living in the house… He used to beat her. Five days ago he applied for the indefinite leave to remain visa through his wife because his wife is a British citizen.

“She reported he used to be a beater and harasser in the past and the court rejected it.”

Applying for the indefinite leave to remain visa via his wife mean he would get permanent stay in the UK after being on a temporary visa.

When police arrived at the scene they began an immediate investigation after seeing blood smears on a wall just inside the front door of the house and cordoned it off the area around the property. A police tent was erected in the backyard.

The large police presence on the premises along with helicopters began the hunt for Rehan Khan who is now wanted for attempted murder. 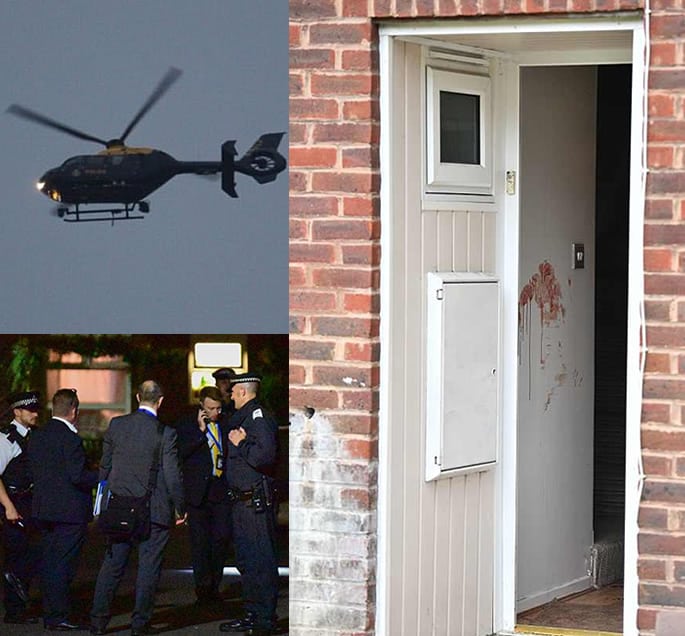 Neighbours and witnesses revealed what they saw and heard.

“We heard the police break in through the fence and saw a bunch of officers turn up.”

“I heard a lot of screaming and crying, it was quite distressing to hear.”

A neighbour who saw the ordeal said the older sons of the couple who are of primary school age begged the attacker not to kill their mother.

A person who witnessed the distressing incident said:

“It was like when you’re watching a horror film and you hear blood-curdling screaming of absolute terror. That’s what it was like. It was horrific.”

Another local resident described the scenes of the attack:

“It was quite distressing to hear the screaming and then I saw the police ripping down the fence literally about ten seconds and the guy ran away.

“When they came out I saw a paramedic cradling the baby out. The police officers were getting distressed – one was crying as well because of what he had seen and his colleagues were consoling him.”

Gary Fletcher, aged 63, who is a local resident said:

“They ran out screaming. One was pointing to his stomach so I presume he saw the stabbing.”

A woman who lived in the area and is a mother-of-three said:

A spokesman for the Met Police said:

“He [Khan] is known to frequent the Hounslow and Isleworth areas, and has links to Newham, Slough and Hammersmith & Fulham.”

Police say they are now looking for a man who is known to have lived at the address and the three people involved in the incident knew each other.

“Work continues to establish circumstances of the incident but at this early stage, it is believed the parties involved were known to each other.

“A crime scene has been established and officers remain at the scene.

“Officers from Hounslow CID investigate. There have been no arrests and enquiries continue.”

Nazhat is an ambitious 'Desi' woman with interests in news and lifestyle. As a writer with a determined journalistic flair, she firmly believes in the motto "an investment in knowledge pays the best interest," by Benjamin Franklin.
Balvinder Sidhu talks Media and Broadcast Journalism with ITV
Every NRI Marriage to be Registered in India or No Visa