Johnny Kalsi and The Dhol Foundation made a memorable entrance to The Queen’s 92nd Birthday Party at the prestigious Royal Albert Hall on 21st April 2018.

An incredible honour for the Desi music troupe to represent British Asians at a Royal event, The Dhol Foundation dressed to impress in traditional white Kurtas in front of a packed hall, featuring much of the Royal family, alongside Queen Elizabeth.

The upbeat Bhangra performance to kick off the celebratory occasion saw Kalsi and his dhol players move through the audience and towards the stage beating their dagga and tilli sticks energetically.

They were then joined by none other than musical legend Sir Tom Jones who sang his iconic track, ‘It’s Not Unusual’ against a foot-tapping dhol beat.

This Desi rendition of Jones’ popular tune was nothing short of spectacular and became a perfect showcase of the fusion of UK and Desi culture that exists today. 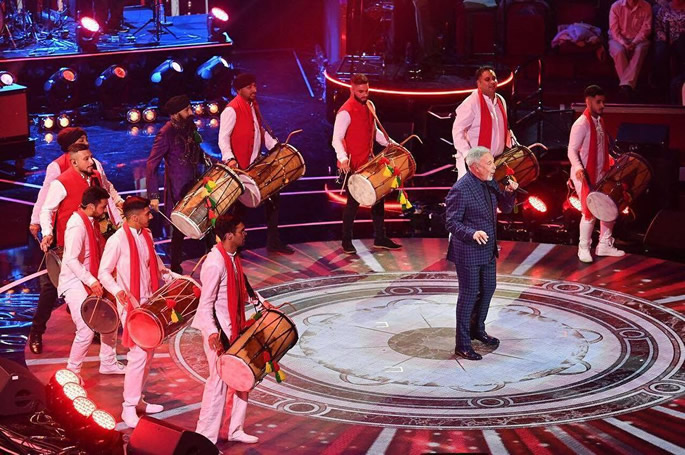 An example of the unity of multicultural British society, Johnny said of the experience:

“It was a true honour to be selected to represent India and the Subcontinent amidst a line-up of huge stars such as Ladysmith Black Mambazo, Kylie Minogue, Sting and Shawn Mendes.

“Working with Sir Tom Jones to create a perfect musical backdrop to his amazing voice was fabulous, and of course performing in front of The Queen and so many Royals was pretty daunting.”

“But a memory to be cherished and a tale that I will definitely be sharing with my grandchildren! I hope we did the community proud!”

The concert honouring Queen Elizabeth’s birthday was attended by much of the Royal family. Including Prince Charles, the Princess Royal, the Duchess of Cornwall, Prince William and Prince Harry with his fiancée Meghan Markle.

It came at the end of the week-long Commonwealth Heads of Government Meeting which was hosted by the Queen in the UK.

Prince Charles, who has now officially taken over as the Head of the Commonwealth, paid tribute to his mother, the Queen, saying:

“While all birthdays are special, this year, the Queen’s birthday falls at the end of the week-long Commonwealth Summit in London, which has brought together 53 countries. 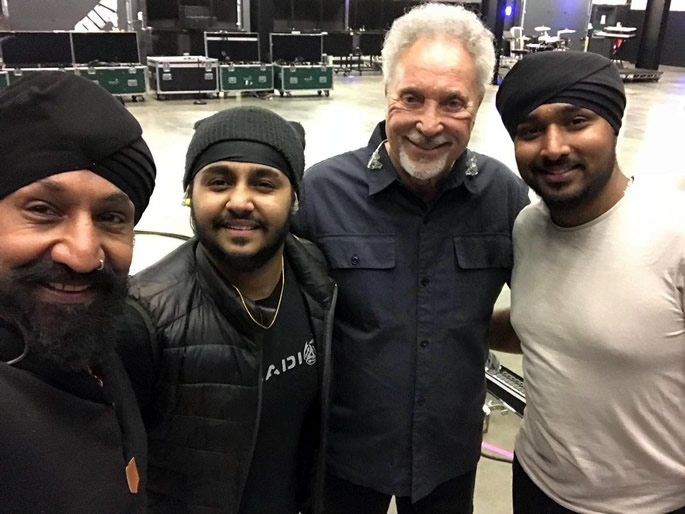 “Tonight we reflect on the pledge made by the Queen on her 21st birthday in 1947 in South Africa, to serve the Commonwealth for her whole life.”

Recognising the collective unity of all the Commonwealth states, the concert saw participants from all nationalities and ethnic backgrounds.

Watch the amazing performance of The Dhol Foundation with Tom Jones:

Johnny Kalsi even managed to post a few selfies with the special guests backstage including Sting and Judi Dench.

Having been on the scene for over 25 years, The Dhol Foundation are regular performers at high-profile events. They even performed at the Closing Ceremony of the London 2012 Olympics as well as The Coronation Gala at Buckingham Palace.

Bringing Punjabi dhamaal to the Royal celebrations Johnny Kalsi and his Dhol Foundation’s performance was certainly one to remember!

Aisha an English literature graduate, is a keen editorial writer. She adores reading, theatre, and anything arts related. She is a creative soul and is always reinventing herself. Her motto is: “Life is too short, so eat dessert first!”
Diljit Dosanjh gets CON.FI.DEN.TIAL on his 2018 UK Tour
Serena Kern: A Talented, Soulful and Ambitious Singer