Ahead of the Commonwealth Heads of Government meeting, Indian PM Narendra Modi was greeted with celebrations and protests alike. DESIblitz explores what his visit means for his own popularity in the UK and the relations between the two nations.

Arriving on Wednesday 18th April 2018, the PM spent most of his day engaging in diplomatic discussions and setting important financial corporations in stone between the two nations.

Following morning talks on UK-India relations with Theresa May, a public event was held at Central Hall Westminster where the PM fielded questions from the audience and social media.

The event, titled ‘Bharat ki Baat, Sabke Saath‘, saw people from all walks of life including the likes of actor Kirron Kher in attendance. Prasoon Joshi presided over the evening.

Modi’s visit primarily saw him participating in the Commonwealth Heads of Government Meeting an official ‘Guest of Government’. Leaders of 53 countries congregated in London to discuss various issues facing the international body. 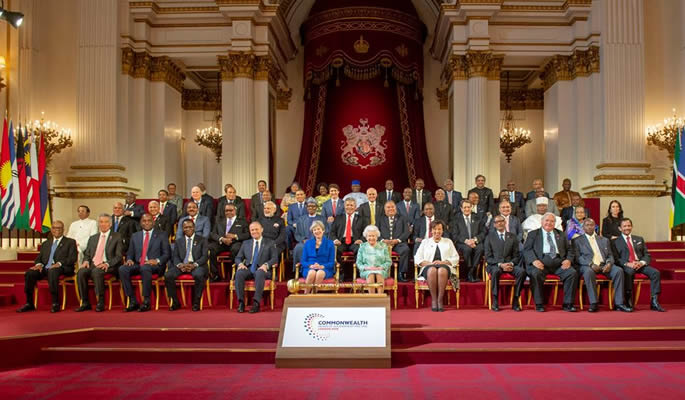 This is Modi’s second visit to the country. His speech at Wembley Stadium from his 2015 visit was marked by strong sentiments about India’s place in the world order.

His arrival in the UK after three years again attracted a considerable crowd in London, and Modi spent some time waving and greeting onlookers.

Recently, minority anxieties have been at their peak, and as his motorcade pulled into 10 Downing Street, chants of “Modi go back” and “Modi is a terrorist” resounded from Parliament Square.

British Asians dominated the crowds, condemning the PM’s inaction on the state of safety for women in India as well as minorities.

Mean while my friends in UK send these pictures.
Have A Look.#ModiInUK pic.twitter.com/CR2lULDknr

Journalist and filmmaker Qasá Alom noted on the BBC Asian Network: “While a large section of people are celebrating in London with flash mobs to welcome him, others are raising serious humanitarian concerns surrounding the PM’s regime.”

Reports of brutal rape from various parts of the country, some involving party members, have put the Bharatiya Janata Party (BJP) in a sticky spot.

India is still coming to terms with the haunting news of an 8-year-old girl, Asifa Bano from Kathua in Jammu and Kashmir being gang-raped by seven men and a minor.

An alleged hate crime targeting the Muslim Bakarwals, the case gained mileage again when crowds associated with right-wing Hindu groups demanded the release of the accused. Al Jazeera reports that two ministers from the ruling BJP were also part of the crowd.

The main accused in the case is Kuldeep Singh Sengar, an MLA and member of the BJP.

Modi has been receiving flak for not making a statement or acting on these cases. The New York Times noted:

“Narendra Modi tweets frequently and considers himself a talented orator. Yet he loses his voice when it comes to speaking out about the dangers faced by women and minorities who are frequent targets of the nationalist and communal forces that are part of the base of his BJP.”

“I have never indulged in counting the number of rape incidents in this government and that government. Rape is rape, be it now or earlier. It is extremely sad. Don’t politicise rape incidents.”

However, many have called out the Indian PM on his remarks. Including Facebook user Padmanabh Pandit, who wrote:

“December 2013 – Narendra Modi : Remember Nirbhaya when you go to vote.

“April 2018 – PM Narendra Modi : rape is rape and should not be politicised.

“He used to criticise me for not speaking up. I feel that the advice that he used to give me, he should follow it himself and speak more often.”

How about making a statement in your own country for once?

Modi holds a dubious reputation for not holding a single press conference during his tenure as Prime Minister. And many are unhappy at his seeming unwillingness to speak about the disturbing events taking place across the country.

Is the Modi Regime Persecuting Minorities?

In addition to Asifa, British citizen Jagtar Singh Johal’s detention in India was one of the main points raised during the protests. Several groups, particularly the Sikhs, were in attendance to draw attention to the arrest and demand relief.

Indian forces arrested Johal over seven counts of aiding and abetting to murder in November 2017.

A Downing Street spokesman reportedly confirmed that Theresa May did indeed raise the case with PM Modi, adding “the government will continue to make representations on his behalf until our concerns are addressed.”

Among the protesters was Birmingham MP Preet Kaur Gill, who later tweeted:

“Today I spoke to many groups outside parliament who were protesting about human rights violations in India. I spoke to Jagtar Singh Johal brother about his fight for justice! I urge PM Modi to address the concerns of diaspora communities.”

Protestors called for Modi to address human rights and free speech violations in India, like the murder of renowned journalist Gauri Lankesh.

The crowd had its share of secessionist demonstrators from the Kashmiri and Sikh communities.

Back in 2015, the Prime Minister had unveiled a statue of 12th-century Lingayat philosopher and social reformer Basaveshwara.

This time too, he visited the statue, installed by the banks of the River Thames.

The Congress Party’s recommendation to grant separate religion status for Lingayats and Veerashaivas has opened up a new vote bank.

Political pundits are viewing this symbolic gesture as an appeal to this new demographic.

Modi’s attendance seems to have been the validation the Commonwealth needed, amidst the debate surrounding the relevance of the body.

Ahead of the  Summit, May and Modi’s bilateral talks laid the base for a possible free trade agreement between the nations post-Brexit.

According to Downing Street, commercial agreements worth up to £1 billion were signed.

Interestingly, Modi is the only head of state to hold one-to-one bilateral talks with his opposite number in Britain.

According to The Guardian, the UK will seek to mirror the EU-India free trade deal but this will be hard to arrive at considering that India is vying for immigration concessions.

Unfazed by escalating criticism, Modi managed to woo the middle classes and secure a position of importance in the Summit.

Referring to the recent surgical strikes in Pakistan, Modi had some strong statements to make about India’s approach to terror.

India will never tolerate terrorism and we demonstrated our resolve during the surgical strikes. #BharatKiBaat pic.twitter.com/Tyd3tCmra0

At the same time, he also emphasised on India’s urge to engage with the world and aid global good.

Notably, the Prime Minister was earmarked for special state hospitality by the British government, keeping post-Brexit interests in mind.

On Thursday 19th April, the PM joined other heads of states at the Commonwealth Summit at Buckingham Palace, including Bangladeshi Prime Minister, Sheikh Hasina. 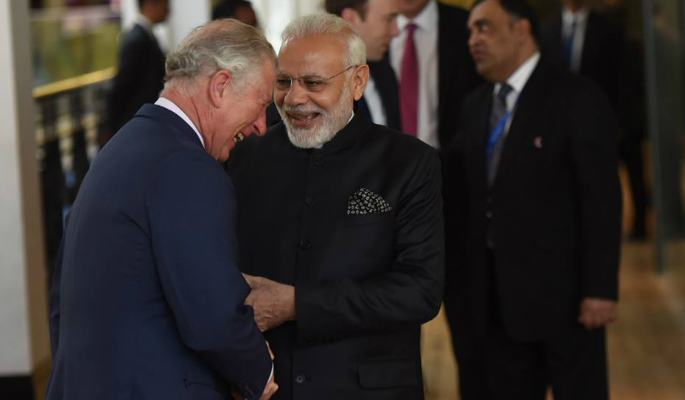 Prince Charles, the Prince of Wales, welcomed them saying: “The modern Commonwealth has a vital role to play in building bridges between our countries, fairer societies within them and a more secure world around them.”

But as India’s relations with the UK and the Commonwealth become ever stronger, it still remains to be seen whether Narendra Modi will finally address the equally urgent matters that Indian society currently faces.

My Soni Kudi: The Truth Behind The Matrimonial Website
William and Kate welcome third Royal Child