The Rise of Narendra Modi

The poll verdict pierced the hearts of the opponents like a slick knife gliding through hot butter. Narendra Damodardas Modi, the ultimate outsider to dynastic politics, has been ushered as the next prime minister into the premises of 7, Race Course Road, Delhi by over 800 million people.

UK has always been an ardent supporter of Modi, it is up to him now to ensure brand 'India' shines on the global stage.

From a tea stall vendor at Vadnagar to the person who now has world’s largest democracy, India, under his aegis, Mr. Narendra Modi has managed to rewrite the political paradigm with a landslide victory over his opponents.

A political life that has been paved with thrones, embellished with turning misfortunes into windfalls, and remembered for squeezing out far-fetched victories with sheer determination and audacity – this is what the next PM of India manifests.

Born on September 17, 1950 in Vadnagar, Narendra Modi was an average student who had proclivity for debates and theatrics.

He joined Rashtriya Swayamsevak Sangh (RSS), a right-winged Hindu group, at the tender age of 6. Laxmanrao Inamdar, his guide and mentor inducted Modi as a ‘balswaymasevak’, a junior candidate, into RSS. 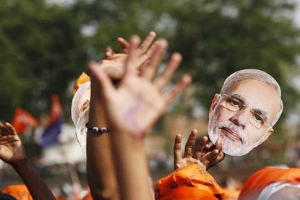 The strong influence of the pathos of RSS resulted in Modi leaving Vadnagar at the age 17 and joining RSS as a full-time volunteer in order to disseminate the words about Hindu ideology around the regions of North and Northeastern India.

Narendra Modi continued his apprenticeship with RSS as a ‘Sambhag Pracharak’ before joining the Bharatiya Janata Party (BJP) in 1987. After joining BJP, the rise of the giant killers was pretty conspicuous. Modi rose in ranks like an insurmountable force. In 1995 when BJP won Gujarat poles, it was who proved to be an aide like no other to then CM, Keshubhai Patel.

In 2001, a massive earthquake played havoc with the serenity of Gujarat which caused over 20,000 deaths and resulted in Keshubhai Patel ceding the throne as CM of Gujarat.

This was the beginning of a stellar rise of Modi among political cohorts. But the path to the Lutyens’ Delhi was nothing like a bed of roses; it was tortuous and trying journey. Following the stepping down of Keshubhai Patel, Modi took over the coveted seat of Gujarat and stumbled upon the biggest controversy of his life that will hunt him for years to come. 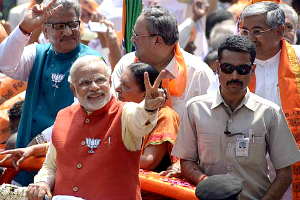 The cataclysmic riots of Gujarat, which were instigated post the dreadful killing of 50 Hindus in Sabarmati Express in Godhra, claimed life of another 1000-2000 people, mostly Muslims, and marred the image of Modi as an adept and decisive leader.

Modi’s only regret, as he quoted in an interview, during this communal outburst was mismanagement of media. The lack of effort on Modi’s part to reach out to Muslim community made him a soft target for vilification, both by the media and the opposition.

But like a steadfast visionary, the bouts of allegation and acquisition sullying his name could not keep him pinned to the ground.

To leave the ghost of riots behind him and redefine and re-establish himself, Modi started his flagship biennial roadshow, ‘Vibrant Gujarat’, aimed at attracting investment from across the globe. Another roadblock in the political life of Modi was the visa ban imposed by US after the dubious role he played during the riots.

Yet, despite all these odds, Modi won the second term in Gujarat in the year 2007 proving the fact that he can connect to masses with his imposing stature and rolling stone attitude.

The period post 2007 saw an unprecedented growth of the state of Gujarat. Charismatic and high-flying persona of Modi persuaded Tata Motors to move its ultra-low cost Nano car plant to Gujarat in 2009.

In the year 2012, global leaders set their keen eyes on him and starting seeing him as a person who is a doer and demands respect. UK ended its 10 year diplomatic ban and a fresh inflow of investment showered on the state of Gujarat. 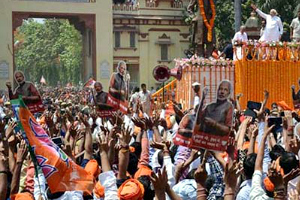 In the meanwhile, SIT dismissed the allegations that where associated with Modi and 2002 Gujarat riots case. On 20 December, 2012, he won another term as CM of Gujarat and these were enough pointers that BJP needed in order to pitch Modi as the next prime ministerial candidate.

Cut to 16th May, 2014, after months of executing a high-octane election campaign that started at 5:30 in the morning, lasted 15 hours a day and covered 3.5 lakh km of distance around the country for over 3 months, ‘mission 272’ of Modi culminated into a decisive victory for BJP and decimating moment for the political Goliath like congress and the fledgling AAP party.

Yet, it is still a litmus test of the highest sorts for Modi to implement the model of Gujarat and his slogan: “Minimum government and maximum governance,” across the country. He also needs to overcome the tag of a Hindu chauvinist and a proponent of hard-line Hinduism and embrace secularism for the betterment of India. 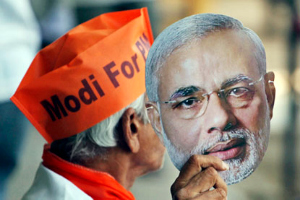 Another political agenda that every leader faces is maintaining global ties. UK has always been an ardent supporter of Modi and with U.S offering a visa to the 14th prime minster of India, it is up to him now to ensure brand ‘India’ shines on the global stage.

Also as a person at the helm of a country like India, it will be interesting to see if Modi will make more visible attempt at reconciliation with minor communities like Muslims, Sikhs and Christians, to mend the bridges burnt with compassion.

Will Modi take a stern stance against the migrants from the neighbouring country or use this opportunity to build stronger relations with them? And will Modi be able to prove himself as a consensus-builder or end up being remembered as a detractor of secularism?

The next 5 years of BJP rule under the auspices of Mr. Narendra Modi will and should address these questions.

Dreamer by day and a writer by night, Ankit is a foodie, music lover and an MMA junkie. His motto to strive towards success is “Life is too short to wallow in sadness, so love a lot, laugh loudly and eat greedily.”
A North West Indian Adventure
Top Places on the Welsh Coast