The films PM Narendra Modi and The Accidental Prime Minister create a stir amongst the BJP and Congress parties prior to the 2019 Indian General Election.

"Together we would love to inspire and ignite positive changes"

Interestingly, with the films releasing ahead of the 2019 Indian General Election, both political parties are slugging it out.

The makers of the films have purposely set a release date with the elections in mind, a first for Bollywood.

With this film being an adaptation of the memoir using the same name, Indian actor Akshaye Khanna takes on the role of Sanjaya Baru, the writer of the original book.

As Bollywood comes to the forefront, the industry has also got into the action. Stars and fans and have pledged their support, along with voicing their opinions.

Meanwhile, the rival parties take a somewhat hypocritical stance about the films as they continue to be at loggerheads.

With Bollywood and politics uniting big time before the elections, let’s take a closer look at both films. 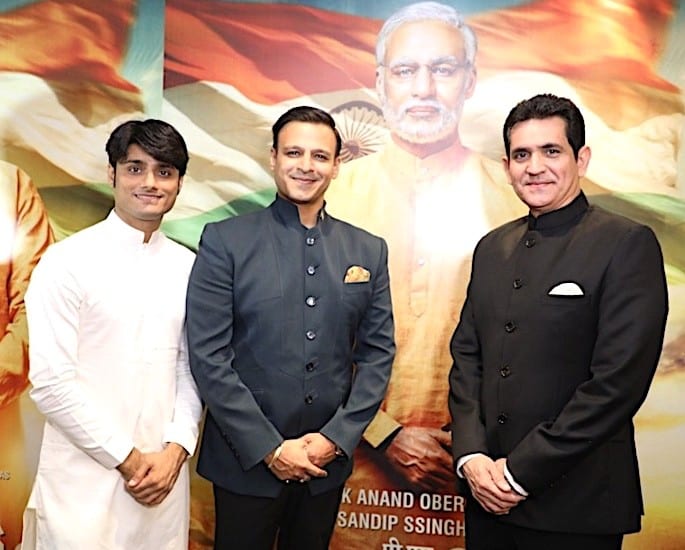 A movie on the life of Prime Minister Narendra Modi is in the making. The first look of the biopic on PM Modi was unveiled in a grand ceremony held in Mumbai on January 7, 2019.

Vivek Oberoi plays the role of the honourable PM. The shoot of the film goes on the floors from mid-January 2019.

The shooting of the movie will extensively take place in Gujarat and across other parts of India.

Apparently, veteran actor Paresh Rawal was to the play the role of the PM. But it seems the filmmakers possible had a change of heart.

Besides Vivek, his father Suresh Oberoi, and director Omung Kumar of Mary Kom (2014) fame were in attendance at the launch event. 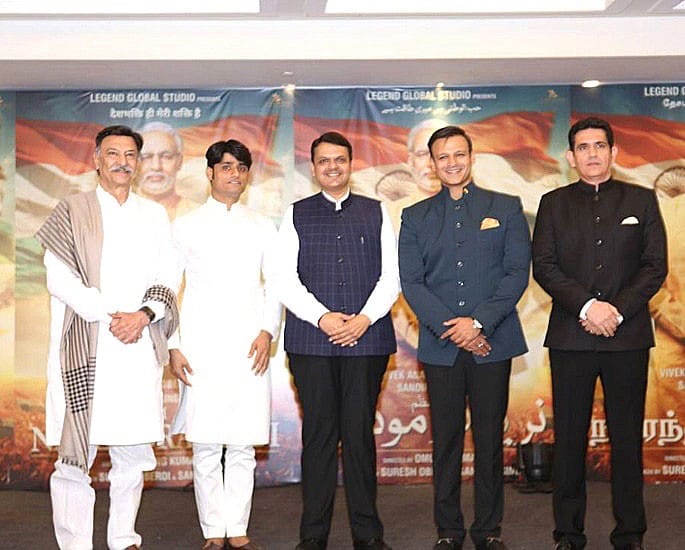 Senior Oberoi is also the co-producer of the film with Sandip Ssingh.

Speaking about his role at the event, Vivek said:

“I am extremely fortunate. Today, I am feeling like I felt 16 years ago, during ‘Company’ days.

“I am feeling the same kind of excitement and hunger because this is a role of a lifetime for any actor.”

“Narendra Bhai is one of the tallest leaders in the world and to bring his personal qualities on screen is an incredible challenge and I want all your blessings that we can complete this incredible journey.” 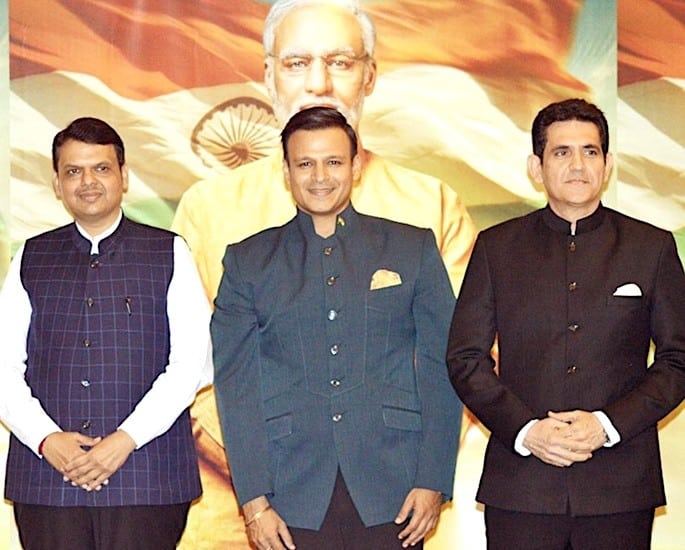 Maharastra Chief Minister Devendra Fadnavis launched the poster of the film, which is in twenty-seven languages.

Fadnavis mentioned it is wonderful that a film of this magnitude is in the making on the PM.

The CM told the media:

The poster features Vivek wearing a yellow kurta with the iconic tricolour in the background.

Oberoi is standing in the traditional style of PM Modi as there is a lot of resemblance between the two.

Besides receiving praises for his appearance, Oberoi has also got trolled by some people. One critical user on Twitter posted:

“Bhaat da fuk iz thiz??! He doesn’t even look like Narendra Modi. Also he doesn’t look like Vivek Oberoi (himself).”

Another member on Twitter thought Kulbushan Kharbanda was a better choice as he wrote:

“Kulbhushan Kharbanda looks exactly like Our PM ..why makers didnt approached him”

Vivek will be attending various workshops as well as trying distinct looks for the film.

It will be really interesting to see how Oberoi gets into the character because that can make or break the film.

Once the trailer is out, Vivek playing the PM has the potential to win the hearts of the people.

The big question is can Oberoi fulfil this task of playing the most powerful person of India. After starring in several South Indian films this is a huge return for Vivek.

Similar to the political landscape of India this could make or break Oberoi. Hence, this is a big test of character for him.

And if he pulls it off along with another election victory for PM Modi, both can reach another level. 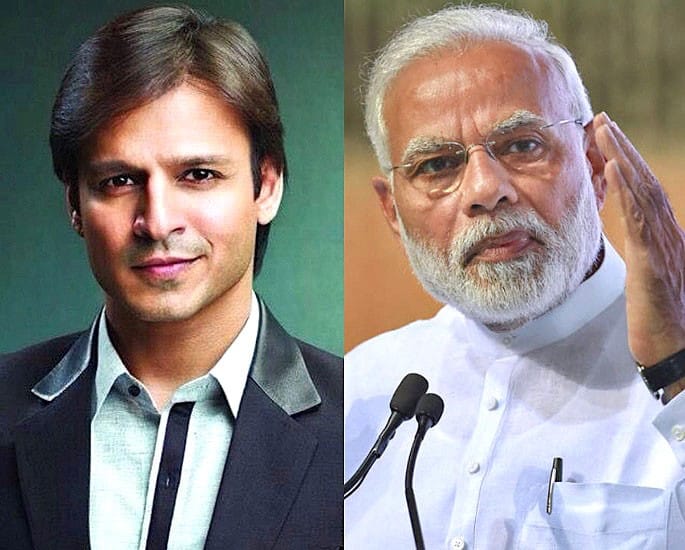 Many will certainly make comparisons of this film to The Accidental Prime Minister, a movie featuring Anupam Kher playing the role of ex-PM Manmohan Singh.

Similar to the biopic on Singh, this film may cause some controversy. Whilst the film has not yet begun, reportedly it will release very close to the general elections.

With such a short window, completing the film in time is a huge task in itself

Actually, the script of this film began at the time when PM Modi was the then Chief Minister of Gujarat. It is at that point that Rawal’s name came forward for this role.

But with Modi Ji going from CM to PM, it all had to change. Consequently, Vivek came into replacing Paresh in the film. Perhaps Oberoi came into the fold to attract the youth of India.

Thus, the film has a different scale, story and actor. 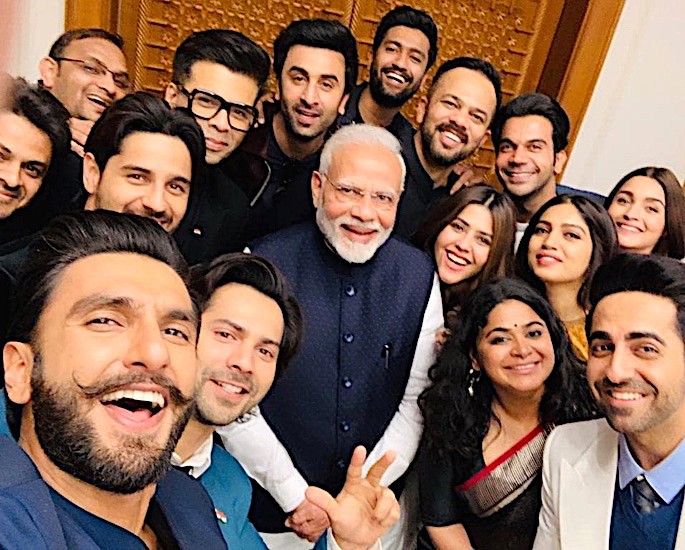 Besides, Vivek, it seems the Bollywood fraternity are rallying behind the PM of the country.

Director Karan Johar and a group of actors flew from Mumbai to Delhi to meet the PM.

Sharing a ‘group-fie’ on his Instagram, Johar thanked the PM, writing:

“Powerful and timely conversations can bring about change and this was one of what we hope will become a regular conversation.

“As a community, there is a huge interest to contribute to nation building.

“There is so much that we want to do. And can do and this dialogue was towards how and what ways we can do that.

“When the youngest country (in demography) joins hands with the largest movie industry in the world, we hope to be a force to reckon with.

“Together we would love to inspire and ignite positive changes to a transformative India.”

The PM also posted the same picture on his social media, captioning it:

“Had a good meeting with popular film personalities.”

Vivek himself is among a few celebrities who did attend the swearing ceremony of PM Modi in 2014. 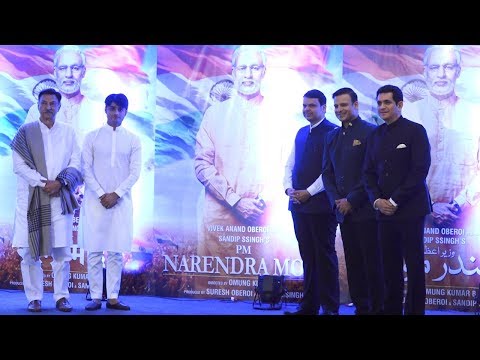 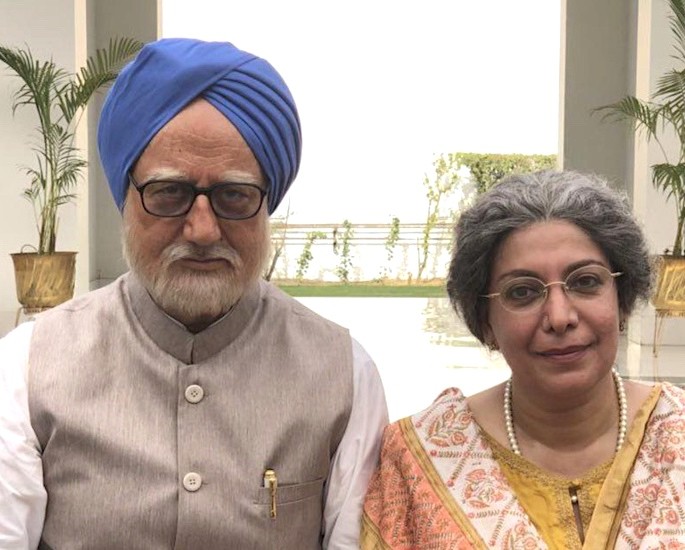 From the Congress perspective, The Accidental Prime Minister is a massively controversial film.

The movie is an adaptation of the book by Sanjaya Baru, who was a former press adviser to ex-Prime Minister Manmohan Singh.

The film is an interpretation of the time when Baru served at the PM office. It is about how Singh was allegedly scuttled by the Gandhi family when serving as PM of the country.

The film has got Congress worried as they claim it as a “propaganda” tool by BJP, especially with its timing ahead of the 2019 elections.

Even the trailer presented on December 27, 2018, completely shows how Singh was PM to keep the seat warm for Rahul Gandhi.

As a result, the Gandhi clan are taking the film with a pinch of salt. 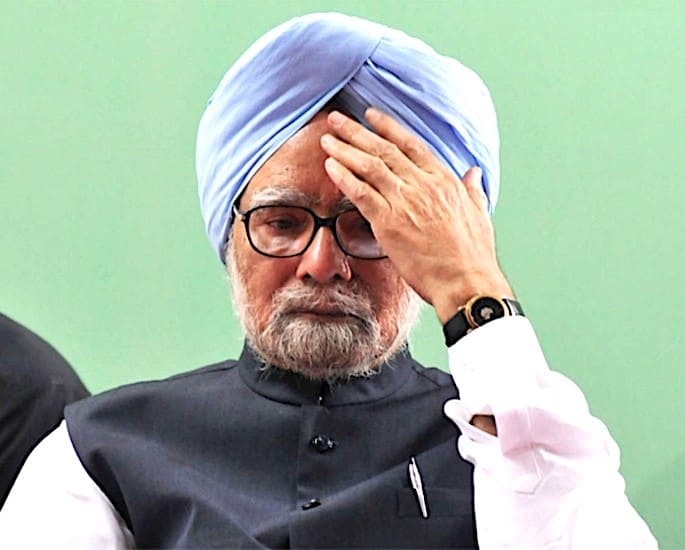 In 2014, Singh himself evaded questions or reactions on the film. However, family members felt the book of Baru was fickle of his imagination.

It is interesting that members of the BJP have been tweeting the trailer of the film, knowing it shows Rahul Gandhi in a negative light.

Congress leaders say they are not bothered and pay no heed to the film. Yet a Public Interest Litigation (PIL) was filed in the Supreme Court of India to ban the promo of the film.

The intense political tug of war about the film did escalate further when BJP’s Amit Malviya slammed the protest of the Congress:

“Why does Congress want to censor a film when the book it is based on was published way back in April 2014? Just because fewer people read books than watch a movie?

“Where are the champions of free speech and expression? Stand up for artistic freedom! #TheAccidentalPrimeMinister”

Why does Congress want to censor a film when the book it is based on was published way back in April 2014? Just because fewer people read books than watch a movie?

Where are the champions of free speech and expression? Stand up for artistic freedom! #TheAccidentalPrimeMinister pic.twitter.com/AzaNyIEkFR

“Riveting tale of how a family held the country to ransom for 10 long years.”

“Was Dr Singh just a regent who was holding on to the PM’s chair till the time heir was ready?

“Watch the official trailer of #TheAccidentalPrimeMinister, based on an insider’s account, releasing on 11 Jan!”

Riveting tale of how a family held the country to ransom for 10 long years. Was Dr Singh just a regent who was holding on to the PM’s chair till the time heir was ready? Watch the official trailer of #TheAccidentalPrimeMinister, based on an insider’s account, releasing on 11 Jan! pic.twitter.com/ToliKa8xaH

With the BJP tweeting the trailer, the question is does the government have a stake in the film?

Or is it a case that everything is fair prior to the 2019 elections. Regardless of the official version from the government, the fact that the BJP is tweeting and promoting itself gives it a political overtone.

Also, the main cast of the film has some form of connection with the BJP.

Anupam Kher who plays the ex-Prime Minister in the film passionately supports Modi Ji, with his wife Kiron Kher winning a Lok Sabha seat from Chandigarh under BJP. 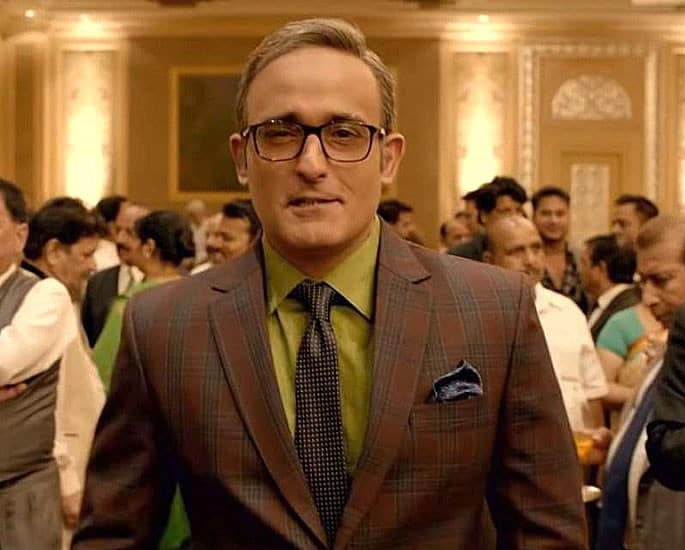 Akshaye Khanna, who plays Baru, a political commentator in the film, is the son of late Vinod Khanna, a film actor also once affiliated with the BJP.

Kher told Reuters, there will be no political statements from him because whatever he says “will not satisfy those who raise objections.”

But the timing for the release of the film has got tongues wagging.

“With all the justifications coming for accidental primeminister…why don’t you just postpone the release till July, if it is just a pure piece of cinema and nothing more?”

With all the justifications coming for accidental primeminister…why don’t you just postpone the release till July, if it is just a pure piece of cinema and nothing more?

Amidst all the controversy a special celebrity screening was arranged for The Accidental Prime Minister.

Raju Kher, brother of Anupam, along with Shakti Kapoor, Satish Kaushik and Sonu Nigam were in attendance.

Anupam Kher has nailed it with his look in the film. Even the expressions and walking style of Kher is exactly the same as Singh. 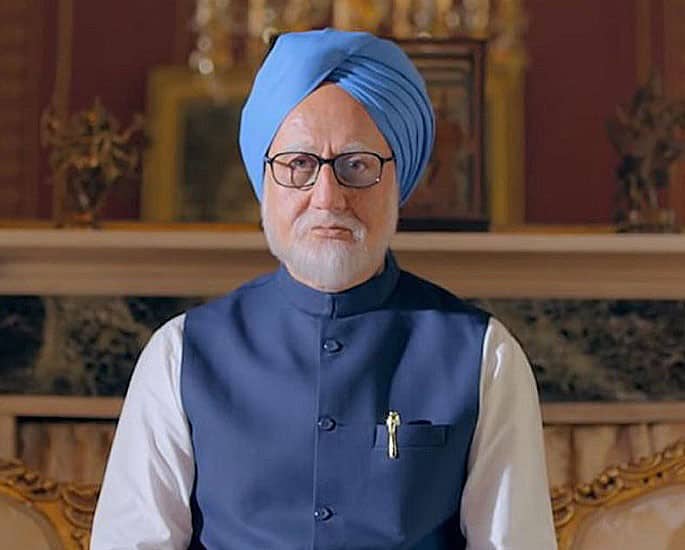 Naturally post-release one can expect more political rhetoric to follow.

The two big questions that come from the aforementioned films include: How will they impact voting? And why are they not being released after the election?

Watch the official trailer of The Accidental Prime Minister :

The interesting point is that both parties talk vendetta and political motives, yet they also advocate for freedom of speech and expression. This is a classic example of double standards.

What will be fascinating to see is how much tolerance these parties have and if they let both films screen peacefully.

It should be left to the public to decide if either film is a true and accurate portrayal of the leaders.

Until we don’t see the final releases, we cannot fully judge both films.

Hats off to Vivek Oberoi and Anupam Kher because biopics like PM Narendra Modi and The Accidental Prime Minister can be challenging, especially with high expectations when playing real-life people.