Indian Prime Minister Narendra Modi is making headlines in the UK for his historic visit and a spectacular celebration with a crowd of 60,000 at Wembley.

“We don’t just want charity from others. What we are looking for is equality.”

India’s Prime Minister, Narendra Modi, is greeted with an extraordinary reception at Wembley Stadium on November 13, 2015.

In his first visit to the UK, Modi shares a night to remember with 60,000 people in the iconic venue in London.

Together with UK Prime Minister David Cameron, they receive a deafening round of applause on stage.

The 65-year-old leader kicks off the historic event with a short speech in English, saying:

“I would like to ensure you that the dreams you have dreamt – and the dreams every Indian has dreamt – India is capable of fulfilling these dreams.

“There is no reason for India to remain a poor country.” 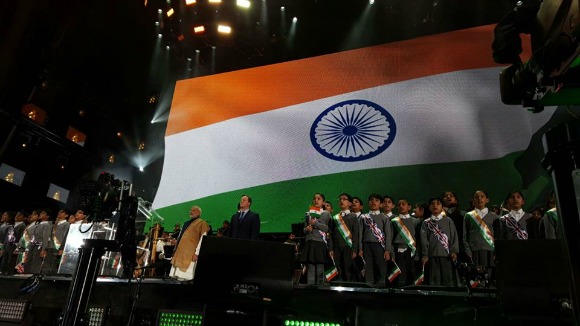 He then addresses his audience in Hindi on his ambition for India.

“We don’t just want charity from others. What we are looking for is equality.”

Ultimately, he wants to see India take the lead in world economy and be considered as a superpower.

Modi adds: “India can take the lead in this regard. If the sun is so kind to us, then we can take the rest of the world along with us in this direction.”

He pledges to deliver a ‘clean India’ and ‘24 hours electricity’ to the country.

A special thanks to PM @David_Cameron. And I fully agree with him, Team India & Team UK are a winning combination. https://t.co/D6pJXnng3p

Cameron also steps in front of the microphone to speak to the crowd: “British Indians put the ‘Great’ in Great Britain.”

The private event is organised by entrepreneur Nat Puri and sponsored by a number of corporate companies, such as the Tata group and the Indian owners of Jaguar Land Rover.

Magnificent firework displays and other entertainment celebrating India’s heritage fill the Stadium with smiles and cheers, leaving audience on a natural high. 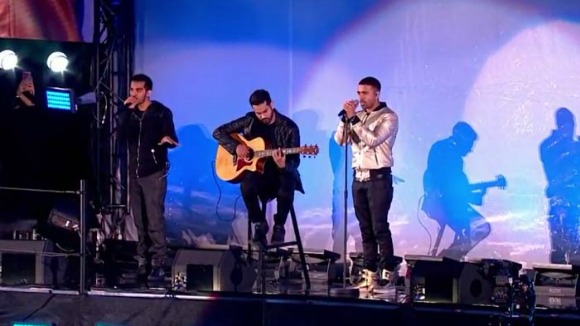 Famous singer, Kanika Kapoor, has the privilege to perform the Indian National Anthem and the special theme song for Modi’s visit – ‘Hello Namaste’.

Alisha Chinai impresses the crowd with the megahit ‘Made In India’, while Jay Sean takes to the stage and brings an acoustic groove with ‘Do You Remember’.

Other musical performances come from the London Philharmonic Orchestra, who teams up with the amazing violinist Jyotsna Shrikanth.

British Asian singer Sonna Rele, who seals a record deal from Ne-Yo, also receives praises all around for her beautiful vocals.

The Shiamak Dance Group from London and many yoga practitioners from across the UK showcase an upbeat and inspiring performances.

Together, they truly represent the growing bond between India and UK, which has already seen game-changing trade deals being signed that benefit both nations.

According to an official statement issued by the UK government, ‘more than £9 billion in commercial deals has been agreed between India and the UK with 1,900 UK jobs created or safeguarded’.

The important trade deal covers many key areas of development, including finance, energy, IT, healthcare, education and creative. 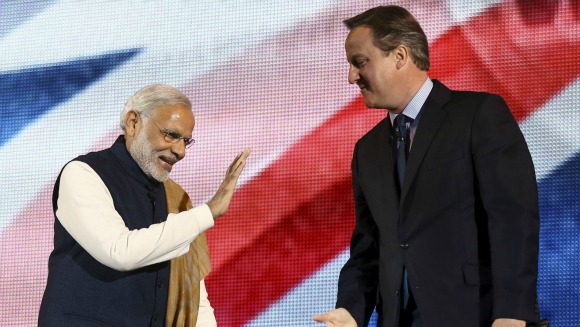 In addition, Modi meets with Queen Elizabeth II for lunch and addresses the Parliament before his rock-star reception at Wembley.

He is expected to take a trip to the Jaguar Land Rover factory in Solihull as well.

But the Indian PM is not without enemies. A group of around 500 protesters, mainly Sikh, staged a demonstration outside Downing Street on November 12, 2015.

They chanted ‘Narendra Modi Go Home’ and expressed their resentment towards Modi’s involvement in the anti-Muslim riots in 2002, among other social issues, such as women’s rights. 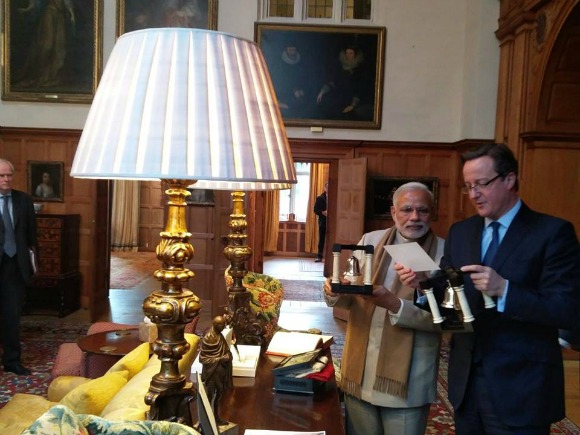 Dabinderjit Singh, principal adviser of the Sikh Federation in the UK, said: “People genuinely fear the direction Narendra Modi is taking the country in terms of the impact on religious and ethnic minorities.

“What happens to the hundreds of millions of Muslims, Sikhs, Christians and he Dalit community in India? Where will we go?”

Modi is the first Indian leader to visit the UK since 2006.