What does the Asifa Case say about Child Sexual Abuse in India?

An 8-year-old’s brutal rape and murder have citizens fearful for the future of India’s children. DESIblitz explores what Asifa Bano’s case highlights about sexual abuse in India.

“If we are at war with children now, what does victory look like?”

Sexual abuse is one of the most under-reported crimes worldwide. Regardless, harrowing accounts of sexual exploitation hit the headlines daily.

One such case is that of the rape and murder of an eight-year-old girl in India – which has sparked outrage across the globe.

Asifa Bano began her seemingly normal day herding horses in Kashmir before she was kidnapped.

She was then drugged, locked inside of a Hindu temple and repeatedly tortured and raped by six men before being strangled to death.

The heinous crime allegedly had political and religious motives – a sordid attempt at driving the Bakarwals out of the area, a Muslim community of Nomadic herders.

Disturbingly, such cases are not unheard of within the South Asian sub-continent. After all, the world is still shaken by the horrific murder of 7-year-old Zainab Ansari from Karachi.

Thousands have united following the incident, showing their support with the hashtag, ‘Justice for Asifa.’

Bollywood superstar Priyanka Chopra also voiced her concerns and demanded people to participate in an apolitical protest on April 15, 2018:

If you can make it, please do. We all agree that armchair activism isn't enough… There is strength in numbers and in unity… #Unnao #Kathua #JusticeForAsifa pic.twitter.com/SYpUhPqPuH

Other celebrities were horrified following the incident, displaying their distress via placards with the words: “I am Hindustan. I am ashamed. #justiceforourchild.” 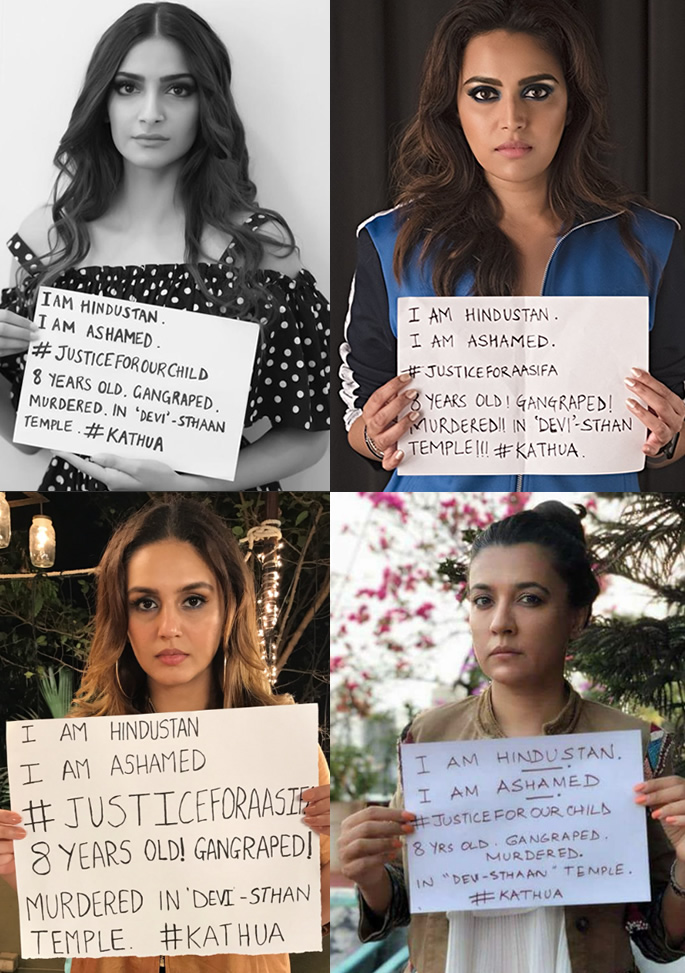 Whilst there are sweeping sentiments of hostility for the six perpetrators, a minority of Hindu activists have been demanding for the release of the killers, with hundreds of lawyers protesting that two of the men are innocent.

Ankur Sharma, one of the lawyers who protested on behalf of the accused, claimed that the Muslim nomads were trying to change the demographics of Jammu, where Hindus are currently the majority. “They are encroaching our forests and water resources,” he told the BBC.

“If we are at war with children now, what does victory look like?”

The Problem of Child Sexual Abuse in South Asia

Dr Alaptagin Khan, a research associate at McLean Hospital and an instructor in psychiatry at Harvard Medical School, delves further into the issue of child sexual abuse in South Asia:

“Abuse is as pervasive as it can get – almost a billion children are victims of this. In societies where there is gender inequality, there is more child sex abuse.

“In many countries, it’s considered okay for men to be aggressive and women to be passive.

“There’s the aspect of power dynamics. The root cause is gender inequality.

“If a man approaches a grown woman, she may scream or resist – but a childlike Zainab can’t do anything.

“Paedophilia is a problem everywhere from the US to Pakistan. But they’ve only recently been getting attention in the media.

Incest is also relevant when discussing paedophilia – when the perpetrator is an adult and the victim is a child.

“Parental sexual abuse is even prevalent in the US. Again, this is the theme of power dynamics.

Anuja Gupta, who is the founder of the organisation RAHI (Recovery and Healing from Incest) in India set-up for adult women survivors of child sexual abuse and incest says that with victims not being able to talk about their ordeals it exacerbates the abuse.

Hence, leading to the abuse continuing for the victims and the abuser hiding their crime. Gupta says:

“Silence is the friend of the abuser.”

In regards to acknowledging the problem of child sex abuse in India, Gupta says:

“It’s taken 20 years for people to say child sexual abuse is happening. But the fact that the consequences could be so devastating and continue throughout a lifetime is not very well understood.”

Furthermore, myths associated with child sexual abuse in India exacerbate the issue further. According to Childline India, some of these myths include:

Only strangers sexually abuse children.
In reality, strangers only form a small part of the problem. Studies worldwide indicate that in up to 85% of the cases, the child’s relatives, family or friends are involved.

When children say they have been abused, it is often a figment of their imagination
Children are often unable to open about the abuse. On rare occasions when they do, it is their reality. Children must be supported when disclosing this information.

With such assumptions surrounding child sexual abuse, it becomes much easier for predators to act upon their desires without any suspicion from peers.

Furthermore, India is one of many countries notorious for its normalisation of child marriages. Often, these involve a young girl with a much older male.

In many villages, these marriages are nothing out of the ordinary. In Rajasthan for the annual holiday, Akshaya Tritiya Day, hundreds of child marriages take place – with men being completely oblivious to their own crimes.

Sexual abuse strikes a chord with many.

53% of India’s children said they had been subject to some form of sexual abuse, with boys being as much at risk as girls, if not more.

According to National Crime Records Bureau 2016, the most prevalent crimes committed against children were kidnapping and abduction, followed by sexual offences against the child, including child rape.

The highest number of sexual offences against children were reported in Uttar Pradesh (15.3%) Maharashtra (13.6%) and Madhya Pradesh (13.1%).

However, in spite of the statistics, numbers may not always be accurate.

Vidya, representative of Tulir – The Centre for the Protection and Healing of Child Sexual Abused – confirms this:

“Tulir’s position on stats about sexual violence is that since it is the most under-reported crime worldwide, statistics mean nothing. Even NCRB will categorise it on the   gradation of seriousness  – For instance [the case of] Asifa will be categorised as murder and not rape.”

The reasons for the underreporting of child sexual abuse are mixed.

“Many children do not report the abuse as there are barriers – they may receive threats from the perpetrator.”

“There may also be a lack of understanding and opportunity or a relationship with the perpetrator.

“On top of this, an uneducated mother in India or Pakistan can only think of what would happen in the future – ‘if others find out about the abuse, she won’t get married and I’ll be doomed.’ She would rather forget about the incident.”

According to Indian law, children are protected from sexual abuse under ‘The Protection of Child Sexual Offences Act 2012.’ (POCSO).

Under the POCSO act, culprits can receive heavy penalties – including a prison sentence and a fine.

The act also acknowledges sexual assault as being more than just penetrative rape; child pornography (section 13) sexual harassment (section 11) and abetment of offence (section 16) are also explicitly mentioned in the act. These may carry a minimum sentence of ten years and a possible imprisonment for life.

This extends to the whole of India except Jammu and Kashmir – where Asifa once lived.

Fervent supporters of the child protection movement in India have urged for the implementation of POCSO in Jammu and Kashmir claiming that now, more than ever, there is a demand. A petition ordering for its enactment has garnered over 5000 signatures.

Nobel laureate Kailash Satyarthi declares the rise in the number of reported rape and sexual abuse cases against children as a “national emergency” in India.

There are over 100,000 cases pending in the judicial system.

Satyarthi, who is critical of the time taken to process child sexual abuse cases, says:

“If a child has to wait and beg for justice in our courts for decades, it is our collective failure.”

“Do you think a 15-year-old abused today, will attend court hearing with her grandchildren when she turns 70?”

Stressing the failure of the justice system in India when it comes to supporting children who have already endured enough.

When it comes to reporting the crime, there are also problems. Satyarthi says:

So, what does the Asifa case say about child sexual abuse in India? A lot, to be quite frank.

Numerous flaws in India’s social and legal system fuse to form a colossal threat – not only to India’s children but to society as a whole.

The unwavering issue of gender inequality and lack of education lives on – even in 2018.

Child sexual abuse is a sweeping epidemic worldwide – but what makes India stand out is its reluctance in confronting the far-reaching matter – perpetuating the stigma even further.

Following a report from the National Crime Records Bureau, a child in India is sexually abused every fifteen minutes.

The question arises – how many more?