Pakistan in Outrage over Rape and Murder of Zainab Ansari

The rape and murder of 6-year-old Zainab Ansari has left Pakistan in shock. Outraged over the growing issue of child sexual abuse in the country, protests have erupted, demanding justice. We explore more about the story.

"We have to act swiftly to punish the guilty & ensure that our children are better protected."

The tragic, disturbing case surrounding the rape and murder of an 6-year-old girl has left Pakistan in utter shock. On 10th January 2018, news broke of a body of a girl, named Zainab Ansari, found in a rubbish dump in Kasur.

Police believe she was raped and strangled to death. However, they are still looking for her captor.

As the news spread across the country, its citizens were left angered and horrified.

In particular, many have heavily criticised Pakistani police for their handling of the case. They have been accused of not doing enough to tackle child sexual abuse in the country.

This has led to public outcry, with protesters demanding justice for Zainab. They have also called for more action in protecting children, as the case highlights the rising issue of predators attacking and sexually abusing youngsters.

DESIblitz takes a closer look at the case, and the wake-up call needed for society.

On 4th January 2018, Zainab disappeared while on her way to a class in Kasur. Her parents were away in Saudi Arabia, so she stayed with relatives at their residence. However, when she did not return, they called local police.

CCTV recorded the final moments of the 6-year-old girl. The footage showed her holding an unknown man’s hand, who led her away. This took place during the same day, in the evening.

Police suspect this individual raped and murdered the child, before leaving her body in a rubbish dump. Over one mile away from her home. After her parents returned to Pakistan, they both criticised the police, as her father Ambreen said:

“My relatives and neighbours told me that the police used to come, have food and leave. While they didn’t do anything, my friends and family spent day and night looking for my daughter.”

Her mother also told reporters: “I have nothing to say, I just want justice for my daughter.” Their criticisms have prompted many to protest, demanding justice and calling for the Pakistani police to take action on child sexual abuse. 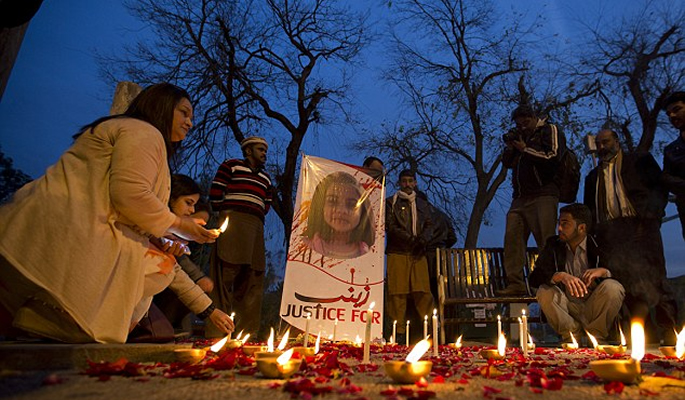 These riots have turned violent, with some throwing bricks and attacking police stations and government buildings. They have also smashed car windows with sticks. However, this has led to the unfortunate deaths of two protestors.

On social media, many celebrated figures have expressed their anger and shock over Zainab’s death. Mahira Khan, Imran Khan and activist Malala have all called for action, hoping police will catch the youngster’s murderer.

We fail as a nation every time we witness a crime as heinous as this. We fail even more when we aren’t able to bring these evil butchers to the gallows. And we fail the most when we sit in our homes instead of getting out on the roads. Press club, Karachi. 2 pm. #Justice4Zainab

Heartbroken to hear about Zainab – a 7 year old child abused and brutally killed in Kasur, Pakistan. This has to stop. Gov and the concerned authorities must take action. #JusticeForZainab

The condemnable & horrific rape & murder of little Zainab exposes once again how vulnerable our children are in our society. This is not the first time such horrific acts have happened. We have to act swiftly to punish the guilty & ensure that our children are better protected. pic.twitter.com/9f7OM3hYT1

Police have revealed that Zainab is the 8th child to have been raped and murdered in Kasur within the last year. In total, there have 12 similar murders in the last 2 years – prompting fears and speculation that her captor was a serial killer.

Regardless, this still highlights how the issue of child abuse is growing in Pakistan. Recent records have also shown such cases are rising.

Sahil, a Pakistani child protection charity, released a report in 2016 on child sexual abuse entitled ‘Cruel Numbers‘. They revealed that 11 cases of child abuse are reported from Pakistan every day.

They also added that 100 victims were murdered after sexual assault. While these figures are from 2016, recent statistics from the first 6 months of 2017 show that 1,764 cases of child abuse were already reported.

One can argue that these numbers indicate that action is needed. While Zainab’s case has put this issue into the spotlight, it’s clear to see the shocking realisation of how prevalent these crimes are.

Activists are now suggesting ways the government can tackle this problem. Civil rights activist and lawyer Jibran Nasir has demanded a list of changes at a protest event on 11th January 2018. He called for the government to implement legal trials for victims.

Lastly, he also urged the Education Ministry to restructure their curriculum and inform children of this rising issue, growing awareness.

While many are hoping action will be taken, it seems the journey seeking justice for Zainab and countless victims seems long and challenging. It requires a change not just in the Government and police, but within society aswell.