Irrfan Khan in Conversation at LIFF 2013

Award winning actor Irrfan Khan who has wowed Bollywood and Hollywood speaks candidly about his life and career at the 2013 London Indian Film Festival.

"I’m here to change the definition of mainstream cinema."

The exclusive ‘In conversation with Irrfan Khan’ event was eagerly anticipated by hoards of excited crowds. They gathered at the British Film Institute (BFI) on the South Bank of the River Thames on a balmy evening of July 20, 2013. Seeing their hero in the flesh was a dream come true for many. 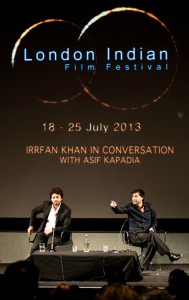 British filmmaker Asif Kapadia, who won a BAFTA for his 2001 film The Warrior, took much pride in introducing Irrfan on stage.

Irrfan strode in a shy, yet confident manner, like only he can. Dressed smartly in a white shirt and black suit, he enraptured the full house by insisting the already seated Asif swap chairs with him, to which followed roars of laughter.

Kapadia introduced Khan as a great friend. They first met in 1999 when Khan was cast for The Warrior. Little did Khan know: “The Casting Director had already pencilled me in for the role long before,” he shares.

Khan jokes: “When a sequence was narrated to me, I felt it better suited for someone like Hemant Birj,” who played Tarzan in the 1985 movie.

Khan had been in Bollywood for some time and admitted feeling down and bored around the time they met. TV serials Banegi Apni Baat (1994) and Chandrakanta (1994) had done well for him, but he needed something else. Khan admits: “I was dying to do a meaningful role.”

It was at this time in life, Khan poignantly recalls: “[Kapadia was my] life changer. A real turning point in my life.” Kapadia quickly added that The Warrior crew soon realised how special Irrfan Khan really was. 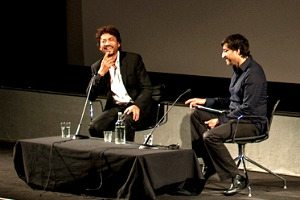 Referring to his childhood, Khan admits: “I hated studies. I dreamt to get rid of this schooling business.” Khan attended a convent school from 6 am to 6 pm while his brother flew kites and had all the fun.

Khan’s strict upbringing meant he was only allowed to watch movies, maybe twice a year. To get around this, he cleverly snuck off to the cinema. However, in fear of going missing for three hours, he watched the same film in installments, such was his genius.

“I was most unlikely to be an actor,” Khan quipped. He couldn’t share his ambition with anyone for fear of reprisal. Except for one friend, who mocked him ‘pyaar se’ of course, on his thin voice and was always correcting his work.

Khan continued his sneaky antics, convincing his mother that he had enrolled at a private institution. Conveniently leaving out the bit about studying acting at the National School of Drama (NSD) in Delhi. Once settled, Khan showed his mother the campus and that’s when Mother Khan realised what a respectable institute the NSD was. 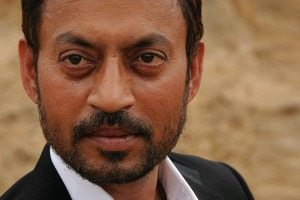 Khan’s loving mother always wanted her boy to work where he grew up in Jaipur and to become a Teacher or Lecturer. Khan muses: “Even now she will say come back to Jaipur and do a job. ‘What job?’ I ask her, ‘Any job,’ she will say!”

Irrfan’s most influential acting inspirations growing up were Dilip Kumar and Naseeruddin Shah. It was the spontaneity of their acting that captured him.

Amitabh Bachchan was different, he believes, admiring Bachchan’s influence and persona. Fascinated by actors and the power they had, Khan smirks: “Now I know acting is just work.”

As for the future, Khan may well return to stage at some point: “I keep flirting with the idea. I do want to go back to stage, but I’m not sure when. I don’t rush things in life.” 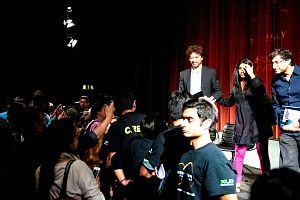 He then followed up with something so powerful that it left the BFI crowd gasping. Khan sat back and as cool as you like, made an emphatic statement: “I’m here to change the definition of mainstream cinema.” Raptures of applause rippled across the auditorium.

Numerology is another interest the versatile actor has. Khan believes: “Mathematics is a great mystery. I’m attracted to it and would like to understand more of it.”

Khan would love to work on a music based film and is waiting for an opportunity. When asked about his dream role however, he replied:

“When I was very young, I used to feel I must play Devdas. Then when I heard the news that Devdas had been made, after that I stopped dreaming.”

“There’s no dream role. I’d rather wait, and some roles come and they become the dream role, rather than me putting pressure on my destiny.”

Khan’s recently released movie is the Nikhil Advani directed movie, D-Day, a crime-thriller where he plays the role of a secret agent. Khan avoided being typecast as a villain early on in his career: “It’s laziness of the imagination when one gets typecast,” he says.

However, could the secret agent role in D-Day lead Khan to be the first ever Indian James Bond? That would really be something worth seeing at the BFI. And Irrfan could not be more perfect for the role.

Irrfan’s presence at the London Indian Film Festival running until July 25, has truly cemented the importance of Independent cinema not only across India but the whole of South Asia.

As Irrfan himself can be seen as an advocate for challenging and innovative storylines that stand alone from mainstream cinema, film makers can take comfort in the fact that the need and desire for their talents will never die out.