Winners of the Lux Style Awards 2013

“Succeeding in winning is something that I am proud to be a part of.”

Beauty, grace and style was at the forefront of a star studded night celebrating the best of Pakistani fashion, music, TV and film. The Lux Style Awards (LSA) is one of the most heavily anticipated nights for the entertainment industry in Pakistan.

Held on July 4, 2013 at the Expo Centre, Lahore, Pakistan, the 12th LSA was an extravagant evening celebrating style and talent in the Pakistani entertainment industry.

The LSA’s have been held annually in Pakistan since 2002. It is one of the nations premier award shows and sometimes even referred to as the ‘Pakistani Oscars’. 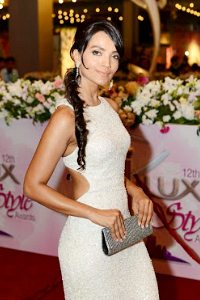 The Red Carpet was graced by the likes of all the best of Pakistan’s TV, music and fashion industries. A bearded, long-haired Fawad Khan arrived with his wife in a dapper black suit and open white collared shirt.

White seemed to be the colour of the night for the ladies at LSA. Actress Aamina Sheikh wore a classy white backless dress, designed by Nabila. Mathira donned a Grecian style white dress with gold straps. Mehvish Hayat looked absolutely stunning in a white following dress with silver embellishments.

Meera broke the trend, opting instead for a metallic gold gown.

The event was sponsored by Unilever and Lipton. Magnum ice cream was given to all the guests with the opportunity to get their picture taken next to a top car model.

Lipton also served tea for all the guests, a warm welcome to the night. The event was organised, managed and choreographed by Catwalk Productions.

Ahmed Ali Butt kicked off the night singing ‘Aaj Ki Shaam Lux Kay Naam’. The singer was surrounded by an array of celebrities as the show opened.

The awards also featured performances honouring Nusrat Fateh Ali Khan. Aamina Sheikh wowed the audience when she performed to ‘Aaja Mahi’ in a silver metallic dress. Atif Aslam was later accompanied by Aamina and Humaima Malik for a great performance of ‘Afreen Afreen’ along with many more big hits. 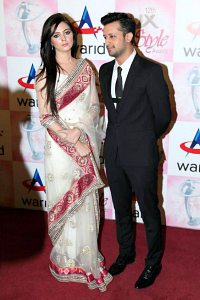 Aslam had a stunning performance. He came to the awards with his beautiful wife Sara Bharwara. Sara wore an elegant white sari with red embroidery work.

Atif wore a black tuxedo and skinny tie. The newlyweds complimented each other perfectly and stuck together the whole night

Mehreen Syed, top Pakistani supermodel wore a stunning white sari by Mehdi. She walked with her husband Ahmed Shaikh, Syed won the title of Best Model at the Awards.

Aamina won best dressed which shocked many due to her dress being designed by Nabila, a hairdresser and stylist. The upcoming model and Angelina Jolie look-alike also stuck to white. A beautiful full-length dress completed with a silver clutch and red lips.

“Nowhere does it happen in the world that the fashion, music, TV and film fraternities get together to honour the deserving talents.”

The big winner of the night was Humsafar. Starring Mahira Khan and Fawad Khan, Humsafar has been a Pakistani favourite for the public. The drama focuses on the trials and tribulations of a married couple. Dominating the winners list, the drama took four awards, Best TV Play (Satellite), Best TV Actress (Satellite), Best TV Actor (Satellite) and Best TV Director for Sarmad Khoosat.

In previous years, Humsafar has been somewhat overlooked when it comes to awards. Amazed at the drama’s achievement this time around, actor Fawad Afzal Khan who won Best TV Actor said: “Succeeding in winning is something that I am proud to be a part of.”

The 12th Lux Style Awards turned out to be a great night of music, dance, fashion, TV and film. With the who’s who of Pakistani entertainment at the core, the Awards saw Humsafar take the crown as one of Pakistan’s best loved serial dramas of the last few years.

Yasmeen is an aspiring fashion designer. Aside from writing and fashion she enjoys travel, culture, reading and drawing. Her motto is: "Everything has beauty."
Irrfan Khan in Conversation at LIFF 2013
Behind the scenes of Chennai Express