An Indian mother has hit headlines for her reaction to her son’s tasteless joke on High Spirits Cafe, where many women claim they suffered sexual assault.

"Even I am very offended by your post and I won't serve you any food for the rest of the month."

On social media, the hashtag #MeToo has grown globally – where women share their experiences of suffering sexual assault. While some have made tasteless jokes on these stories, an Indian mother taught her son an honest lesson on sexual abuse.

#MeToo began circulating Twitter and Facebook on 16th October 2017. As women revealed the sexual abuse they suffered from, some even detailed the location of where it took place.

One such place involved High Spirits Cafe, located in Pune. Many Indian women claimed that managers had harassed them in this cafe.

Not only did visitors of the cafe make these allegations, but ex-employees also shared their own accounts.

The claims sparked a wave of differing reactions. A combination of those who support the women who came forward and those who wanted to make unnecessary ‘jokes’.

On Facebook, one Indian man posted a tasteless joke. Comparing these experiences to himself, he explained how he would “love it” if a group of women harassed him.

Referring back to the Pune cafe’s scandal, he added: “Does High Spirits offer that as well?” 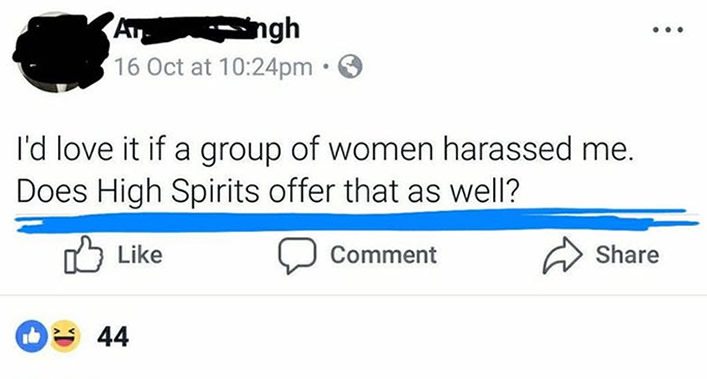 The man’s bad joke resulted in divided reactions, some amused or disgusted by his humour.

However, we imagine not even he expected a response from his own mother. Shortly after he made the joke, his mother posted a comment – which soon turned to a much-needed lesson. She began with:

“I am really proud of you as my son but I will never support you in such jokes. Harassment is something that every woman has been through and even I have been through it at some point of my life.”

She went on to explain how in 1994, despite her political studies, she had to run a kitchen. Instead of running a constituency, she suggested how her family and marriage took priority over her career ambitions.

Revealing her pride for the women who criticised her son for his joke, she added: “Even I am very offended by your post and I won’t serve you any food for the rest of the month.

“And before you go to your father complaining about me I want to thank him for helping me write this.” What an amazing response from this Desi parent! 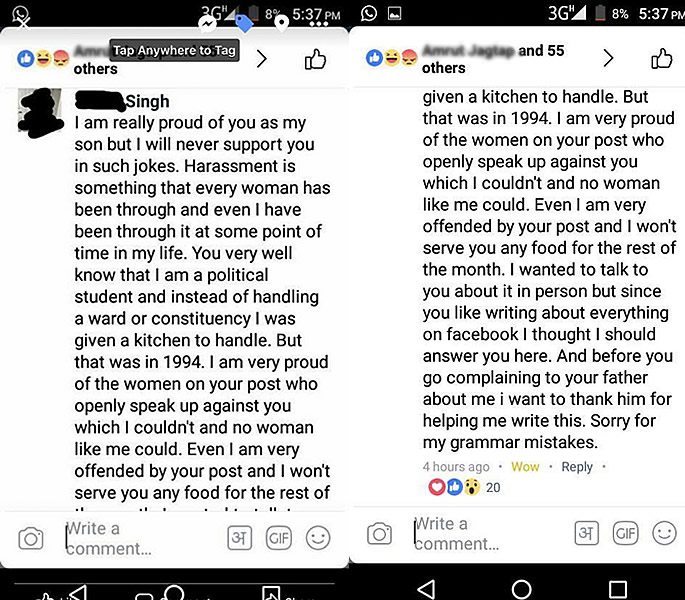 It seems the lesson stayed with her son. He quickly deleted his original post and gave an update, which read: “Thank you for appreciating my mother. I have taken down the post and I apologise if I’ve offended anyone.

“Mother asked me to Whatsapp her a screenshot of my apology. Hasn’t been sending me any happy Diwali messages since afternoon. I don’t know about the food.”

The mother’s comment harks back to a campaign created by Breakthrough India. Called #ShareYourStory, it depicts an Indian mother and son at home. When the son leaves his phone, he gets a message, with a wolf-whistle beep tone.

Feeling frustrated, the mother asks her son to change it, with him insisting for an answer. She replies:

“Because that’s how some men whistle at me every day when I go to work. And I’m fed up of the whistling.” As she walks away, her son looks away from his phone, feeling umcomfortable with this new knowledge.

Both the Facebook comment and video deliver outstanding lessons on sexual assault. That it isn’t a subject to make fun of and joke around. Those who do such things forget to consider they may know loved ones who have experienced similar abuse.

We applaud the mother for her blunt and honest thoughts on her son’s joke. Teaching him a lesson we’re sure he won’t forget anytime soon.