Harvey Weinstein faces more allegations as Aishwarya Rai Bachchan’s supposed former manager suggests that he wanted to “get her alone” with him.

"He asked me to leave the meeting numerous times and I politely declined."

A woman, claiming herself as the actress’ former manager, suggested that Weinstein attempted to get Aishwarya on her own with him. Yet the woman adds she saved the star from his advances.

On 11th October 2017, the woman made the claims by leaving a comment on Variety.com. Named as ‘Simone Sheffield’, she posted it on one of the website’s articles.

Explaining how she acted as Aishwarya’s former manager, she revealed more on Weinstein’s supposed advances. She claimed:

“While dealing with Harvey I found it comical how hard he tried to get Aishwarya alone. He asked me to leave the meeting numerous times and I politely declined.”

In her comment, Simone also claimed that Weinstein had directly asked her: “What do I have to do to get her alone?”

The woman also went on to suggest that the Hollywood producer had made threats to her over her job. Yet she remained defiant that Weinstein wouldn’t meet Aishwarya alone, saying:

“But you can be sure, I never gave him the opportunity to even breathe on my client.” 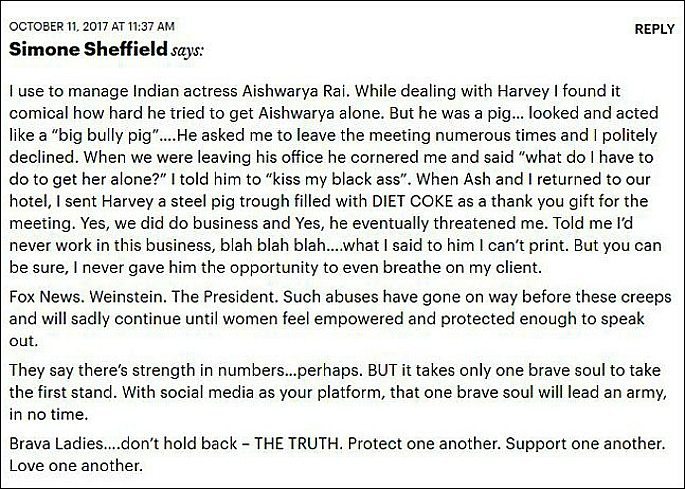 With these strong claims, the post has hit headlines. On Twitter, many gave their own thoughts on Simone’s comments.

Praising her for her actions, Twitter users have commended Simone:

Simone Sheffield is a BADASS. She stood up to that disgusting perv, she protected her client and she one-upped him. Amazing woman.

In the past, Aishwarya and Harvey Weinstein have met professionally several times. For example, they have posed together in images at Cannes Film Festival and AmFar Gala.

Indeed, the Bollywood actress has worked on several international projects over the years. Starring in films such as Bride and Prejudice (2004) and The Pink Panther 2 (2009).

While Aishwarya may have escaped Weinstein’s advances, other stars have stepped forward on the abuse they claim to have suffered.

The controversy began after three women accused the Hollywood producer of raping them. New York Times published their accusations in early October 2017.

Since then, major Hollywood actresses such as Angelina Jolie and Gwyneth Paltrow have also spoken out. Claiming that Weinstein had made sexual advances to them. These claims date back from as early as 1984.

The producer, who co-founded Miramax, has gathered over 300 Oscar nominations for his work in cinema. Considered as one of Hollywood’s biggest figures, these allegations have sent shockwaves throughout the industry.

The organisation of Oscars reportedly also held a meeting on Harvey Weinstein. In this emergency meeting, they supposedly reviewed the producer’s membership.

He denied the original allegations via a representative in a statement. However, both New York and UK police have launched investigations into the matter.

With these new claims involving Aishwarya, it seems more developments will likely continue to these allegations.