A video of two Indian girls being harassed showed the shocking nature of it. The video was filmed to highlight the issue in India.

"We were sitting there and he kept harassing us."

A video has circulated on social media of two Indian girls being harassed by a man in public with shocking results.

The video was made by Himadri Pruthi to highlight the ongoing issue of women being subjected to harassment in all forms in India.

In the video, the two young women are sitting outside on some steps. Initially, one man is spotted staring at the women but it soon becomes clear that most of the men around them gaze in their direction.

Harassment comes in different forms which can lead to many crimes including rape in India.

From pinching and brushing against on public transport to non-stop gazing on the streets or at communal places.

In many cases, when a woman is being harassed, many male witnesses do nothing to help, effectively encouraging harassment, as this video highlights.

As soon as the women sit down, a man sitting near them edges closer to them. The women then get up and move away but the man ends up sitting next to them, desperately trying to get their attention.

Other men around them can see what is going on but they decide to watch instead of intervening.

The video shows a “vulture-like” gathering of young Indian men who simply just watch the women being harassed but do nothing to help them.

The women move again but are followed by the man who continues to harass them.

All the men around them are seen staring at the situation while one of the women tells him to stop talking to them. 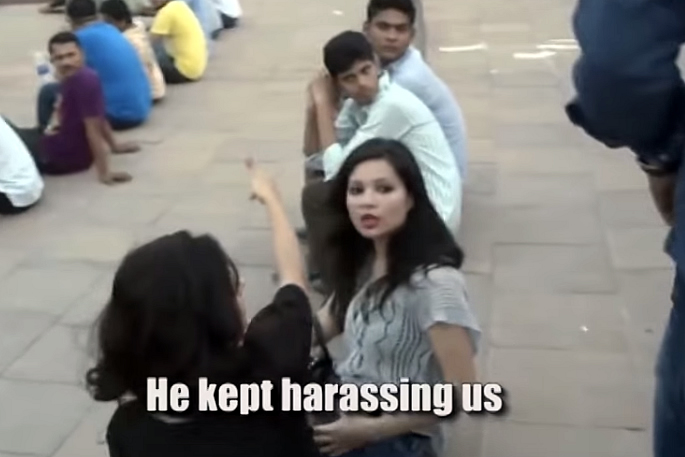 Despite the women moving from place to place, they are subjected to gestures and catcalls even if it is discreet. The video highlights how many women are unsafe in such situations.

A man named Amit then approaches the man and takes him to one side. He then confronts the harasser and questions why he is harassing the Indian girls.

Other witnesses ask what is going on. Amit replies: “He is harassing women.”

One man then asks: “Who did he harass?”

Amit then states: “He is harassing them.”

He turns to the women and asks: “He passed comments on you right?”

One of the victims explains: “We were sitting there and he kept harassing us.”

It was then revealed that it was a social experiment to show whether someone would help or not if they saw a woman being harassed in public.

The ‘harasser’ was revealed to be an actor as part of the video, who praised Amit for intervening. The Indian girls were also actresses and applauded Amit for his actions. 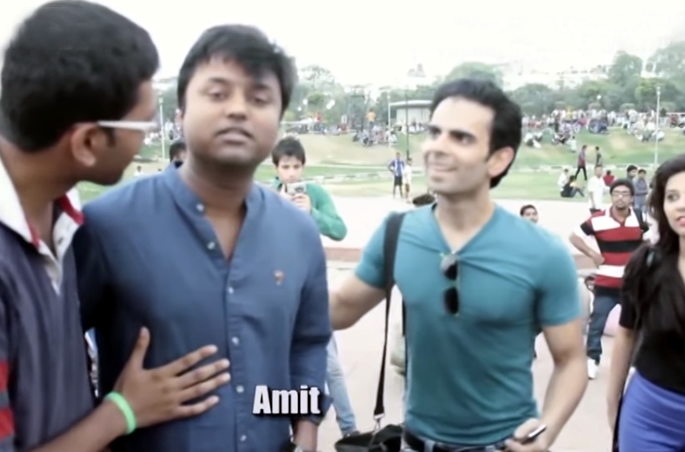 Amit explained his reasons for coming to the women’s aid:

“The women were not able to sit independently.”

The video highlighted what happens in many cases. Many see harassment going on but choose not to help.

Those who did not help were then asked why.

One man said: “I don’t have the courage. No one here has the courage to stand up.”

The video’s host Varun Pruthi then said: “You know what the problem is in our generation.

“The problem is the first person to take a stand, others also follow by watching him.

“He didn’t see how powerful he (the molester) is.”

Varun went on to say that people must come together to help those who are being harassed. He said that when people come together, molesters will stop what they are doing.

The video highlights what should happen but is not happening in India because those who want to help are scared to do so.

The video is to make people aware that by uniting against molesters, women can be saved from more terrible crimes later on.

Watch the Social Experiment of the Indian Women being Harassed

Two Women in Public, Watch till the end…

Two Women in Public, Watch till the end…

Dhiren is a journalism graduate with a passion for gaming, watching films and sports. He also enjoys cooking from time to time. His motto is to “Live life one day at a time.”
Indian Man arrested Smuggling Gold hidden in Rectum
Husband punched and hit Estranged Wife with Coffee Jar