A former desi-American policeman has been sentenced to prison for five to seven years for rape and intimidation of a witness, among other charges.

Sharda, in his police uniform, ejaculated onto the victim's leg and a blanket.

A former desi-American policeman has been jailed for five to seven years, after the jury found him guilty of raping a woman in 2013.

Judge David Ricciardone of the Worcester Superior Court sentenced Rajat Sharda under charges of ‘rape, open and gross lewdness, larceny under $250 and intimidation of a witness’.

While on patrol in the early morning of August 6, 2013, Sharda spotted a man and woman having sex in a parked car near Bancroft Tower in Salisbury Park, Worcester.

He handcuffed the man, but instructed the woman to exit the vehicle and walk to his police car. Her testimony described how the accused sexually assaulted her and masturbated in front of her.

She also told the court Sharda, in his police uniform, ejaculated onto her leg and a blanket that she used to cover up herself. Sharda removed the blanket afterwards, but it had not been recovered since.

Assistant District Attorney, Ryan Donahue, said: “He had a badge. He had a gun. His actions are frankly disgusting.” 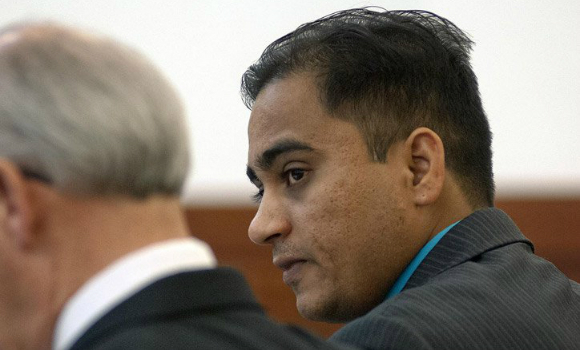 After the ruling, Donahue pressed for a higher sentence on the grounds that Sharda had abused his position as a police officer.

The 33-year-old’s defence attorney, Peter Ettenberg, was not pleased with the outcome of the case and argued the case was a ‘he said, she said’ in the absence of evidence.

Ettenberg pleaded the father of a one-year-old boy is a religious man, who helps homeless people by giving them food. He is currently filing an appeal to overturn the sentence.

Sharda is the first desi American officer of Worcester Police Department in Massachusetts. He was laid off in 2008, but returned in 2011 until he was removed from his position in September 2014 in light of the case.