A 13-year-old Indian child bride has written a letter to her school principal in an attempt to rescue herself from an arranged marriage. DESIblitz has more.

"I took an oath at the time of admission that I will not get married before I turn 18."

A young Indian teenager enlisted her school principal’s help when her parents set up an arranged marriage for her.

13-year-old Duli Hembrom is a Class 9 student at Milan Mithi Uchha Vidyalaya, who tried to persuade her parents to call off the wedding.

When her parents were determined on going ahead with the teenager’s wedding, she wrote a letter to her school principal for help.

It read: “My parents have fixed my wedding on April 22. I do not want to get married.

“I took an oath at the time of admission that I will not get married before I turn 18. I do not wish to get married early.”

Nevertheless, Duli’s parents believed they had every reason to take control.

Lachhu Hembrom, her father, told Hindustan Times that ‘child marriage was a common phenomenon in their society, as it was difficult to a find suitable match for a grown-up girl’. 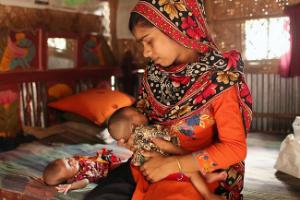 Duli’s brave attempt to take a stance serves as a reminder of the age-old issue in India.

Child marriage is illegal under the Child Marriage Restraint Act 1929 during the British reign. It states the girl and boy must be 18 and 21 years old respectively in order to enter into marriage.

Aarati Benera, a women’s rights activist said: “Child marriage is illegal and a social evil. It also has a negative psychological impact on a child. They are burdened with additional responsibility at a very young age.”

It is commonly practised in India and other countries, such as Bangladesh and Africa, to improve the family’s fortune at the expense of the children’s education.

United Nations recently reported that India is home to the second highest number of child marriages. In 2013, there were around 23 million child brides.

Analysts have predicted the total number of child brides around the world could reach 140 million by 2020.