A unique incident occurred at a wedding when an Indian bride from Punjab drove her new husband home on a decorated tractor.

She took the wheel and drove her husband home

A wedding and the Indian bride became the talk of the town for the unique feature at her wedding.

A convey of tractors drove to the procession before the bride drove her new husband on one after the wedding.

The wedding took place in the city of Kapurthala, Punjab.

The man, Lovepreet Singh, got married to Amandeep Kaur. For the procession, tractors were decorated with flowers and there were no cars or other vehicles in sight.

There was a total of 25 tractors that were part of the procession.

Lovepreet drove one of the vehicles to his wedding and tied the knot with Amandeep. It was reported that he travelled 40 kilometres to the wedding venue.

Guests and locals gathered at the unique sight and took pictures.

Meanwhile, Lovepreet helped his new bride up onto the tractor where they posed for photos. 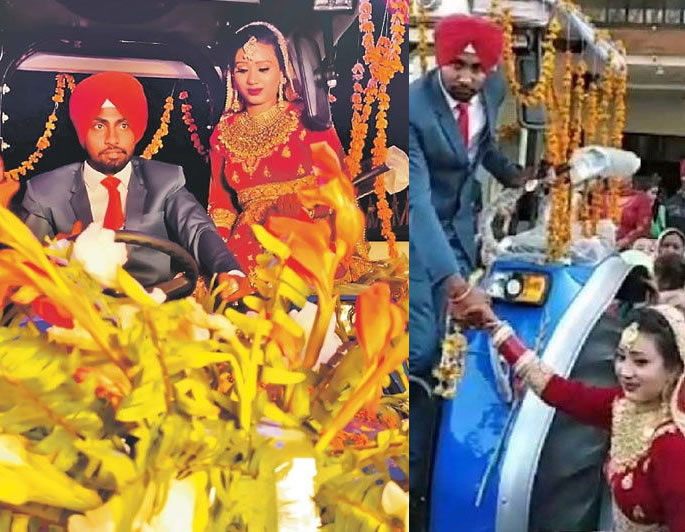 The Indian bride then decided that she wanted to take over. She took the wheel and drove her husband home on the decorated tractor.

It was a memorable wedding and Lovepreet said that it was his childhood wish to have tractors for his wedding procession.

He stated that his family fulfilled his wish.

Lovepreet’s family explained that everyone will remember the wedding, saying that it will remind them of the past.

Lovepreet’s father, Kulwant Singh, said that tractors were used for processions when cars were not around in the area.

He went on to say that his son wanted to have tractors at his wedding so they decided to grant his wish.

Lovepreet’s uncle Jagga said that previous generations of the family were farmers.

Their favourite vehicle is the tractor, therefore, the wedding has become a memorable moment.

Cases of unique wedding processions and role reversal are a growing trend in India.

In one case, a bride turned up to her wedding on a horse in what was a traditional custom within her community.

Anshuta Munshi arrived at the wedding venue on a white horse to the backdrop of music from a DJ and a band.

Wedding guests and locals gathered at the scene to witness the unique procession. Many danced, including Anshuta.

The Indian bride was seen wearing a blue bridal gown and wearing a multicoloured turban.

She married Ashiq, an Indian man living in the United States where he works as an engineer at Apple Company. Guests celebrated as the couple got married.

Dhiren is a journalism graduate with a passion for gaming, watching films and sports. He also enjoys cooking from time to time. His motto is to “Live life one day at a time.”
TikTok Star Kirti Patel arrested for Attempted Murder
Car Dealer Caught with £1 million Cocaine hidden in Car Bumpers