A man from the Indian state of Punjab, but one thing that was unique was that the Indian groom took his bride home on his bicycle.

Following the marriage, the newly married couple left on the bike

An Indian groom got married on November 28, 2019, however, it was a unique ceremony as he rode 15 miles to his wedding on his bicycle before taking his bride home on it.

The happy occasion took place in the city of Bathinda, Punjab.

Although his mode of transport may seem strange, it acted as several messages including showcasing his disapproval for dowry, something which is still common throughout the country.

Typically, weddings involve the groom arriving in a car decorated with flowers. The bride leaves with her husband in a lavish car.

Family members spend huge amounts of money to ensure that the wedding is perfect, but Gurbakhshish took another approach which could spark social change.

Although the wedding venue was 15 miles away, the Indian groom decided to cycle there.

It was quite a small wedding, only family and close friends being invited. Around 12 people were part of the baraat procession. 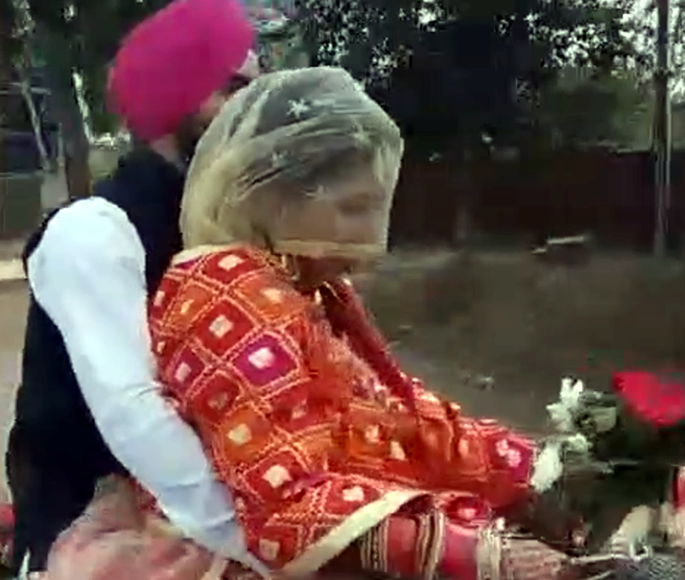 Following the marriage, the newly married couple left on the bike, which had been decorated with flowers and had the bride and groom’s names written.

Gurbakhshish did not accept dowry which is a positive step on a topic which is such a negative but is still a common aspect within weddings.

The groom said that instead of taking money for marriage, he said that the money could be used for other things.

Gurbakhshish revealed that his unique approach was to provide a message to the rest of society in order to prevent unnecessary spending at weddings.

He also said that it was to help the environment. Using a bike instead of a car would help reduce pollution.

Gurbakhshish intended to get married with simplicity and hoped that others can take on board this initiative and get married in a similar way.

After the wedding, Gurbakhshish cycled while his new bride sat in front, still wearing her bridal outfit.

At one point, Gurbakhshish took a risk by putting his hand on the window of a car in order to go faster. It may have seemed dangerous for him and Ramandeep but they were fine. 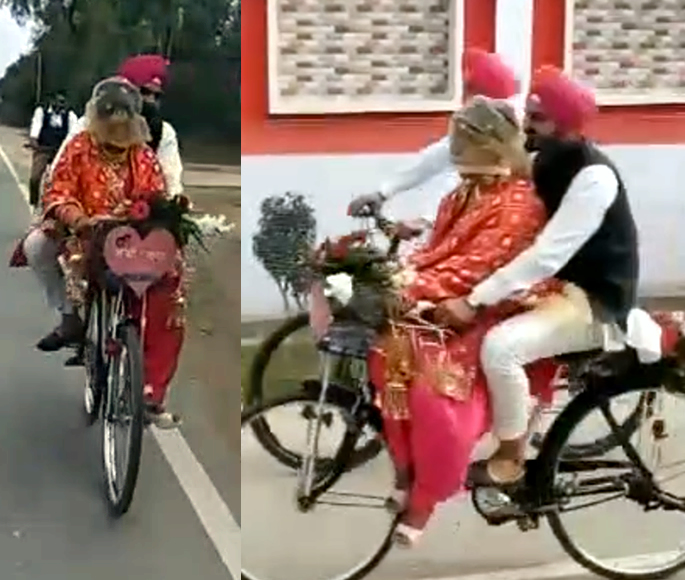 His wedding presented different methods that wider society could learn from.

One of the most important parts was no dowry. This is a huge positive compared to other incidents in India where brides are being attacked and even killed for not giving dowry.

Gurbakhshish rejected the idea of dowry and his simple wedding is something which could make a change to reduce dowry.

Dhiren is a journalism graduate with a passion for gaming, watching films and sports. He also enjoys cooking from time to time. His motto is to “Live life one day at a time.”
Indian Woman on Bus uses Facebook Live to Expose Molester
Bank Worker jailed for Fraudulent Computer Parts Scam