Desi Moves Showdown has returned for 2013 with it shortlisted nominations of some of the most promising Asian dance groups the UK has to offer. From contemporary fusion to pure Bhangra, contestants will compete for the Desi Mover(s) trophy.

Ready for its second year running, the popular Desi Moves Showdown 2013 is back. Both bigger and better, it has some amazing dancing talent in store.

Following the announcement of the shortlisted nominees, the groups and individuals will battle it out against each other on Saturday 9, November at the very lush Birmingham Town Hall to a rapturous audience.

Desi Moves has been created by Punch. A leading music and arts development agency, Punch specialises in touring music and arts, and educating and training young talents in its outreach programme.

Desi Moves, in a very short space of time, has rapidly become one of the UK’s leading dance competitions, and DESIblitz is proud to announce that they are one of the show’s official media partners.

With its diverse range of styles, Desi Moves fuses Bollywood, Bhangra, Giddha, Hip-Hop and Bashment. The competition welcomes contestants from all ages, ethnicities and backgrounds.

This Fusion Dance Competition in association with Latifs, will see the best of the UK’s newest dancers compete for the star trophy of Best Desi Mover(s) for 2013 and an amazing £1000 in prize money.

But the awards and rewards most certainly don’t end there. The winning group will also have the exciting opportunity to star in a British Asian film and perform at various top dollar events including Miss India UK 2014. Not only that, but they will also bag a full feature exclusive on yours truly, DESIblitz.com.

The winning group or individual will also receive a year’s artist-development support from Punch Records as well as PR and marketing support. The winners will also get a glamorous professional photo-shoot from renowned celebrity photographer, Hiten Ondhia. 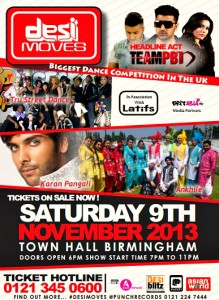 After much deliberation, the contestants for this year’s Desi Moves Showdown have finally been announced. In the competition ring for 2013 are: Desi Nach; Haripa; WDC; I Have A Dream; Jin N Tonic; Laurelle & Jo; and Sahil Handa.

Each of them will take to the Town Hall stage and fight for their chance to win the ultimate Best Desi Mover(s) 2013 title. But it’s not just the finalists who audiences can expect to see. Headlining the lively evening will be none other than Team PBN (Punjabi by Nature).

The jam-packed show will be a celebration of true Desi dance and music, as performed by some of the best talents to have come out of the Midlands.

Tru Street Dance who made their Bollywood debut in smash hit, Yamla Pagla Deewana 2 (2013) will also perform on stage.

In addition, KSPARK dance troupe, led by Karan Pangali, will also show off their amazing dancing skills. Karan, who is known for his performances alongside British street dance crew, Diversity, is perhaps one of the most promising new UK Asian choreographers around.

His ability to perfectly fuse and synchronise Eastern and Western dance is second to none. And it is not just dance that he is known for. A model, actor, performer and choreographer, Karan also notably competed in India’s televised ‘Just Dance’ competition where he made it to the Grand Finale.

If that wasn’t enough nach for one evening, audiences will also be able to enjoy the latest acts from last year’s Desi Moves winners, Ankhile. Ankhile has truly gone from strength to strength, performing all across the UK and even in Holland.

On the judging panel for this year will be Toffee from Tru Street Dance crew, also known as Ikeela Sealey. Toffee is a leading professional dancer and choreographer. She has worked with a number of high profile British brands and organistions, from the likes of Toni & Guy, Channel 4, the NHS and the BBC. 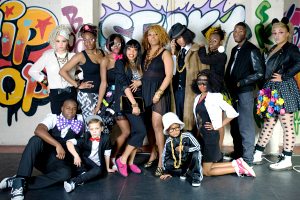 Toffee is eager to see what new talent she will come across in the Showdown. Her project, Tru Street Dance, is community based and helps young aspiring dancers to develop their skills and be recognised for their talents.

Joining Toffee will be Karan, whose knowledge and training in Bhangra, Indian Classical, Salsa, Modern Indian, Jazz, Street and Hip Hop dance will ensure that he will be looking out for the sharpest and slickest moves on the dance floor.

Desi Moves has been created in collaboration with Punch Records. Ammo Talwar, CEO of Punch is adamant that this year’s showdown will be even bigger than last year:

“Desi Moves is a great event which unites people from different cultures and backgrounds,” says Ammo.

The Desi Moves Showdown 2013 will be a fun filled evening of dance, music and some of the hottest talent from the Midlands and around the UK. For more information on where to purchase tickets, please visit the Symphony and Town Hall website. Alternatively, check out our Competitions page for your chance to win tickets!

Aisha an English literature graduate, is a keen editorial writer. She adores reading, theatre, and anything arts related. She is a creative soul and is always reinventing herself. Her motto is: “Life is too short, so eat dessert first!”
Dubai Music Week invites Bollywood’s Farhan Akhtar
Brit Asia Music Awards 2013 Winners