Top artists from around the world graced the stage at Dubai Music Week, which took place from September 24 to 29. Different days featured different artists such as Timbaland, will.i.am, Selena Gomez, Farhan Akhtar, Pritam and many more.

"It was extremely exciting to have Farhan. He is the new generation’s Bollywood icon."

Dubai Music Week (DMW) is an international music trade show held annually in Dubai and features live concerts from global A-list stars from all over the world. It is also a new platform for launching upcoming artistes and finding new talents.

The 6-day event, which took place between September 24 and 29, saw the likes of some the biggest Western and Eastern stars. From the likes of the great Quincy Jones, will.i.am and Timbaland, who were joined by the one and only Selena Gomez and our very own Bollywood talent, Farhan Ahktar.

Timbaland said: “I’m all about the culture of a place. I think Middle Eastern sound is the best sound ever.”

With these A-list stars performing at the Dubai World Trade Centre Arena, this was truly a memorable week of some of the greatest talents from the US, India and the Arab world. 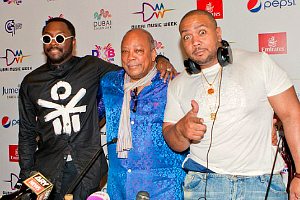 “This is just the beginning. This place has potential, it’s original and the best thing about it is that it’s stuck to its roots. It’s really an exciting challenge to come and spread the artists from here worldwide,” added Jones.

Taymoor Marmarchi, (the executive director of Global Gumbo Group and Quincy Jones Company, the organisers of Dubai Music Week) said: “For us, it was extremely exciting to have Farhan on board. He is the new generation’s Bollywood icon.” 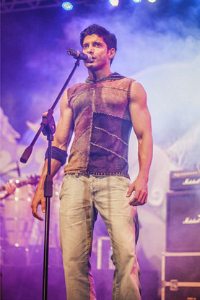 “To have him in Dubai to perform is simply amazing, and to do that alongside Pritam – with his great musical legacy – this will be a phenomenal show.”

The stars also performed hits from Pritam’s endless list of incredible songs in Bollywood, from 2004’s Dhoom to this year’s Yeh Jawaaani Hai Deewani (2013), showcasing the diversity of Bollywood music:

“Given the remarkable popularity of Bollywood across the world, we are delighted to be hosting the industry’s top talent right here in Dubai. With a range of performers lined up, Bollywood night will mirror Dubai’s diversity by showcasing a range of music spanning rock to romance from some of the most well-recognised performers in India today,” added organiser Issam Kazim.

Music and Farhan have never been too far apart as his father Javed Akhtar is widely considered as one of the most gifted lyricists of Indian entertainment. Before the concert, Farhan said:

“Apart from the predictable things, I hope this concert will be a lot of fun for the audience. I am really looking forward to performing in Dubai with Pritam and the others. I have been touring various cities especially after Rock On!!

“I really enjoy live concerts; it’s all about ensuring everybody has a great evening. The concert is basically my desire to explore the live music scene further. It’s important and exciting to perform for a new audience in cities across the world. This time it’s Dubai for me.” 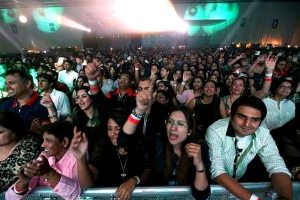 On stage, Farhan recreated some of the songs from his acting debut film Rock On!! (2008), including the hits ‘Sindbad The Sailor’, ‘Pichle Saat Dino Mein’, ‘Senorita’ (Zindagi Na Milegi Dobara, 2011) plus a remixed version of Dil Chata Hai (2001):

Fans will be eager to hear that a sequel to Rock On!! has also just been finalised, and we’ll be able to seen even more of Farhan’s musical talents immortalised on screen.

Farhan has always been a strong advocate of the India’s band culture, which is slowly re-emerging. Farhan himself has formed one that has nine members. Called Farhan Live, he has take them across India on tour: 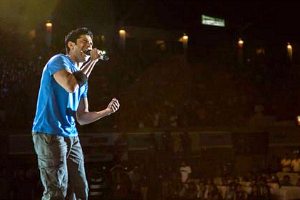 “Films have always had music so it’s not like they elbowed into an already thriving indie music scene. I’m just glad today there is a reemergence of band culture and that a lot of them, apart from being good, are also doing well,” said Akhtar.

Farhan Live debuted earlier in 2013 at the Goa carnival where there performed to a crowd of 25,000.

Performing at DBW’s Bollywood Night, international fans were in for a real treat. But in a rather unusual twist of events, fellow singer, Mohit Chauhan was nowhere to be seen on stage.

Bizarrely, Chauhan who has sung the songs for smash hit Barfi! (2012) was kept backstage in the Green Room. Organisers later admitted that time-constraints and a late start to the show had meant that there was no time for Mohit to come on stage: 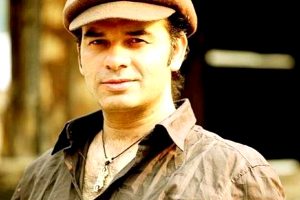 “Back from a disappointing Dubai visit. Wish the organisers in Dubai had planned their act better. First, was made to wait for three hours to do a sound check and then was told that since the show had started late, there was no time left for my performance,” said Mohit later on social media.

“The organisers, am told didn’t even inform the audience why I wasn’t performing. This, when I was waiting in the green room for five hours to go on stage. Dubai, am sorry I couldn’t sing for you guys. And I promise to come back soon with a full-fledged concert.”

But despite the chaos, Bollywood Night turned into a spectacular evening of the night. Marmarchi expressed that Dubai Music Week represented the ‘coming together’ of music from every community represented in Dubai, and that the Bollywood concert played a key demographic, which is known worldwide. All that is left is to see what talents they bring next year.

Meera grew up surrounded with desi culture, music, and Bollywood. She’s a classical dancer and mehndi artist who loves everything connected with the Indian film and television industry and the British Asian scene. Her life motto is “do what makes you happy."
Singer and Screen Star Karen David
Desi Moves Showdown 2013 announces Finalists