The charming and humble Farhan Akhtar overwhelmed everyone with his great sense of humour, his songs and his life story as he spoke candidly at the LIFF 2014 and exclusively to DESIblitz.

"It’s amazing that motivation of not wanting to be thrown out of the house."

The ambiance at London’s BFI Southbank Centre was already vibrant but when Farhan took to the stage, the audience were laughing their hearts out, clapping, and singing along with him. His Masterclass was a Box Office blockbuster and he certainly proved to London why he is a superstar.

Farhan was interviewed by Nick James, editor of Sight & Sound and at times even Nick was found losing his composure and laughing at Farhan’s witty replies. 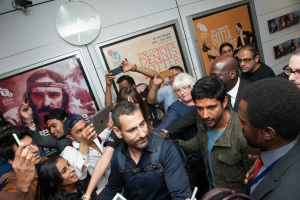 Farhan talked about his teenage days and how though he was studying Commerce in college, he bunked classes and went to a cinema called ‘New Talkies’ and also attended various film festivals screening Bruce Lee films.

Due to low attendance, he was expelled from college and his mother, Honey Irani gave him an ultimatum to get a job or walk out of the house.

Farhan said: “It’s amazing that motivation of not wanting to be thrown out of the house. And within a week I had a job and was working as an assistant director.”

Farhan further worked in an advertising agency called Script Shop for three years. It is there that he started scripting for his directorial venture Dil Chahta Hai (2001), which went on to become the cult youth film of India.

Farhan talked about a scene from the film where the three friends are sitting in Goa and embracing the silence and their surroundings. 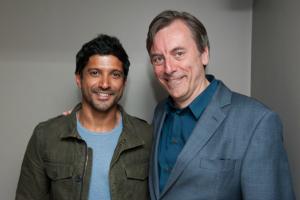 He said: “DCH is a blend of characters and all the people I know personally. With friends, there is always a time when you’re comfortable in each others’ silence. That’s what this scene is for me.

“And the best reward to me is when, even after so many years, people travel to the same spot in Goa where the scene was shot, take a picture in the same pose and send it to me. That’s the magic of filmmaking!”

Farhan also briefly talked about his film Don (2006) which was a remake from the film written by his father Javed Akhtar along with Salim Khan.

The audience cracked when he jokingly said: “Original Don has a dialogue at the start of the film, ‘Don ko pakadna mushkil hi nahi namumkin hai’ and within a few minutes the Don dies. That always bothered me since childhood and I wanted to rectify it.” 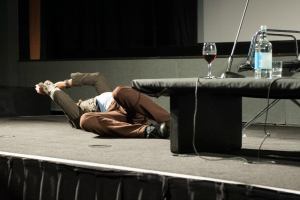 Farhan talked about working with Shahrukh Khan. They connected on books, films and the ‘snake dance’. Farhan actually got up from his chair and displayed his snake dance moves, to which the ovation and the laughter in the hall echoed.

“I heard the story and I immediately said that I want to be a part of this film. But Abhishek Kapoor asked me ‘can you sing?’ I said let’s meet at the studio tomorrow and do a test. He had no idea that I played guitar or that I sang.

“So we jammed for a bit in the studio and I said that if I don’t sing the songs then I don’t think that I want to do this part, because singing is very essential to the performance in this movie. And that’s how it really came together and it was just a wonderful experience working on that film as a first.” 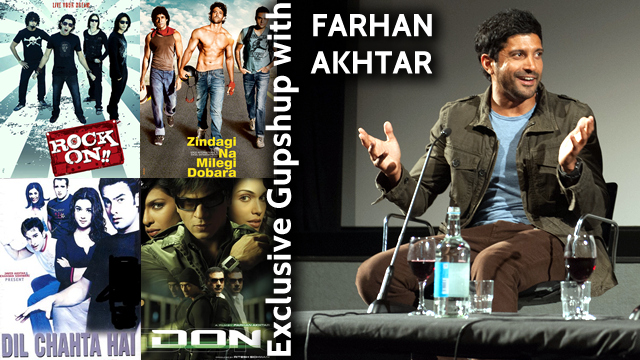 The most adorable moment of the evening was when Farhan called upon his youngest fan, a two year old girl on the stage and gave her a warm hug. All the girls in the audience certainly wished to be two year old.

“Apart from your family of course, who I think keeps you grounded, you should also have friends who you’ve known for years and who have known you for years and can tell you that you’re behaving badly.”

He added: “It’s important to have the right people and not just ‘yes’ men. So for me the circle of friends who I usually hang out with and people that I’ve known for around 25-26 years don’t think twice of telling me that they just feel something is happening and that I’m changing in a way that is not a good way.” 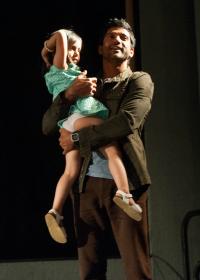 Farhan not just made the audience laugh and ask questions but also made them sing with him. On being requested by his fans, Farhan happily sang the song ‘Rock On’ and asked his fans to join in.

While the stage looked like a rock concert when Farhan sang, he also made the hall go silent when he spoke one of the famous poems, ‘Toh Zinda Ho Tum’ from his film Zindagi Na Milegi Dobara (2011).

Farhan truly came and conquered. He was a delight and charmed every single member of the audience with his intelligence, charisma, handsome looks, great form, his rough voice, and above all, with the best sense of humour in Bollywood.

Komal is a cinéaste, who believes she was born to love films. Apart from working as assistant Director in Bollywood, she finds herself doing photography or watching Simpsons. “All I have in life is my imagination and I love it that way!”
Big Bang Theory pay rise for Raj
Entertainment ~ Review