Eager to see if your favourite restaurant or takeaway has made the shortlist? Well, look no further, DESIblitz has all the inside scoop of the English Curry Awards 2013.

"We wish all the finalists the best of luck and I am sure it will be fantastic evening."

The English Curry Awards has announced its shortlist for 2013. The competition, which saw over 7,000 nominations from across the UK have been meticulously sifted through to uncover this year’s curry-loving finalists.

Judges have visited the individual restaurants and takeaways to decide their final verdict, and competition for each category is definitely sizzling!

The curry contenders will have to wait with bated breath to see if they will go home with a shiny award, and be declared a English Curry Award winner for 2013.

The English Curry Awards is in its third year and has proved its worth in sourcing out the best curry and curry-makers in the country. As well as this, the Awards aim to highlight the achievements of those restaurateurs, chefs and other staff, who work day in and day out to provide the best service to their loyal customers. 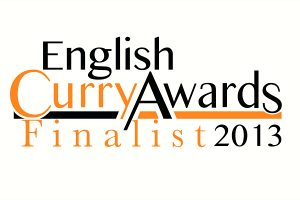 Of course, it’s not all about the restaurants and takeaways.

The Awards will also take a moment to say thanks to all the dedicated curry-eaters out there, who have gone out of their way to promote, and ensure that South Asian businesses are flourishing in their local communities across the UK.

The English Curry Awards 2013 will take place at Salford City Stadium in Manchester on September 2, 2013. Guests and Finalists can enjoy a luscious evening of live entertainment and guest appearances, including a tantalising four course meal.

There will also be fundraising activities to look forward to, raising money for official Charity partner, The Well Foundation. The Awards night is sure to be an evening of great entertainment, food and achievement!

“This year we have added a few categories to spice things up and received a great response to these new editions, as thousands of nominations flooded in, in support of the public’s favourite.”

“We wish all the finalists the best of luck and I am sure it will be fantastic evening,” Yasmin added.

The finalists for the English Curry Awards 2013 are:

Curry King or Queen 2013
To be announced on night

Lifetime Achievement Award
To be announced on the night

Eager to find out who will be crowned the Curry King or Queen 2013? The English Curry Awards is expected to be a truly spectacular evening celebrating the best of being British Asian. It is most definitely an event not to be missed!

The Awards is organised by Oceanic Consulting, responsible for ethnic promotions across the UK. More details of the event can be found on the Love Curry website.

Aisha an English literature graduate, is a keen editorial writer. She adores reading, theatre, and anything arts related. She is a creative soul and is always reinventing herself. Her motto is: “Life is too short, so eat dessert first!”
The History of Ice Cream
Winners of the English Curry Awards 2013