The nominations for the inaugural Asian Media Awards 2013 were announced in a chic reception at London’s City Hall on September 30, 2013. DESIblitz were there to witness all.

"This is essentially what the awards epitomises: embracing talent in the UK on every spectrum."

London’s City Hall was filled with the crème de la crème of Asian media personalities and representatives on September 30, 2013.

The lively gathering saw announced the short-listed nominees for the Asian Media Awards 2013 – the very first of its kind – which were unveiled to a rapturous audience.

The Asian Media Awards, in its inaugural year has a very simple aim: to promote and celebrate the achievements of the Asian media industry. From top reporters and journalists, newspapers and magazines, radio stations and PR agencies, the Asian media game is a rapidly growing and ever-expanding one. 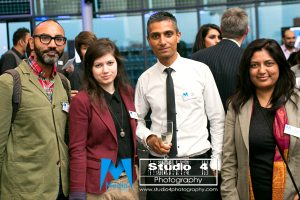 Focusing in on the key issues that affect Asians across the globe, it is a vital heartbeat for the British Asian and South Asian community.

Media Manager of the Asian Media Awards, Umbreen Ali added: “Since the inaugural launch, there has been an overwhelming response to the Asian Media Awards. That can be seen in the calibre of the short list. This is essentially what the awards epitomises – embracing talent in the UK on every spectrum.”

Dubbed London’s Living Room by Mayor Boris Johnson himself, the venue boasted picturesque views of the heart and core of the cosmopolitan Capital, overlooking the iconic London Bridge.

The elegant reception saw a steady flow of champagne and delicate canapés. Host of the evening was the ever-charming Presenter and broadcaster, Lisa Aziz.

Speaking to the guests, Aziz said: “Asian media has come a long way, as have Asians in the media industry in the last two decades.”

“With the growth in digital television, social media and the internet there are more Asians in the media industry at all levels than ever before.”

“So it is perhaps only fitting that we have launched the Asian Media Awards to celebrate the success of our presenters, television stations, newspapers, radio stations and bloggers,” she added.

DESIblitz is very proud to announce that it has also been nominated for the Best Website Award. Of course, such an honour indicates the sincere aim of the Asian Media Awards to highlight and support new and growing digital outlets, who, day in and day out are striving hard to create unique and meaningful content for the wider Asian community.

In addition to supporting the UK’s Asian media, the awards has also named CARE International and lendwithcare.org as their official Charity Partner.

CARE International seeks to transform the lives and lifestyles of communities in developing countries across the globe. It does so by providing financial aid and support to budding entrepreneurs wishing to transform their local community in its development.

The prize-giving ceremony will take place in Manchester on October 31, 2013. Here is the full list of nominees for the Asian Media Awards 2013:

1Forty Award Campaign of the Year

The 26 categories all showcase the wide and varied achievements of the Asian community within the competitive media world.  The first Asian Media Awards 2013 ceremony will take place back where it all started in Manchester, on October 31, 2013.

Taking place at the very prestigious Hilton Deansgate, the black tie event will host the very best Asian media talent that the UK has ever known. Good luck to all the nominees.