The UK’s PM David Cameron made a historic trip to India with the largest delegation ever. Aiming to strengthen ties and business relationships with India.

"This is a deeply shameful event in British history"

British Prime Minister David Cameron arrived in India on 18th February 2013 for the visit to boost trade ties between the two countries. With Europe still wallowing in its sovereign debt crisis, the United Kingdom is looking to gain inroads into the Indian Market. 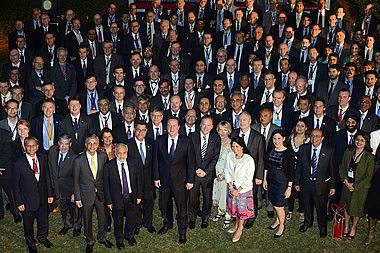 According to Anil Kumar Gupta, a professor in Agriculture at the Indian Institute of Management, India shall become a superpower in the 21st century. He says it will emerge as a desirable, entrepreneurial and resource and energy-efficient superpower in the near future. Could this be the foresight for Cameron’s visit?

Greg Barker, the Minister of State for Climate Change accompanied Cameron on this trip, to support his stance for going green. So, Cameron’s first port of call was at the Unilever office in Mumbai, where he spoke all about going green in a bid to boost the British economy. He reiterated the idea that clean green energy is the key to economic growth. The reason for him campaigning so hard may lie in the fact that India is the number one country in the world for going green.

Recent numbers from Bloomberg New Energy Finance indicates India leads the world in green investment growth. In 2011 India earned $10.3 billion and this has increased by 52% each year. 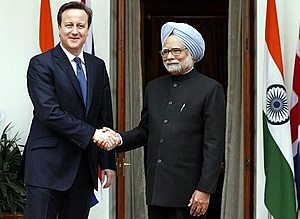 These statistics make India a hugely sought after partner financially and if they keep going at this rate they will become a formidable economy in the next twenty years. Given Britain’s ever-decreasing economy, it’s safe to say that the UK probably needs India much more then India needs the UK.

On the first day of his visit, Cameron called for the UK and India to form “one of the greatest partnerships of the 21st century.” Speaking in Mumbai, Cameron said he is seeking a “special relationship with India.”

On a positive note, Prime Minister Cameron spoke about plans to initiate a ‘one-day super priority’ visa service, which would allow Indian students and businessmen to study, work and invest in the UK without any hassle. He also claimed there would be no limits in place for the number of Indian students who wished to study in the UK.

However, Mr Cameron made it very clear that the process must ‘go both ways.’

He said: “I think, in return, we should be having a conversation about opening up the Indian economy, making it easier to do business here, allowing insurance and banking companies to do more foreign direct investment into the Indian economy.”

“There are still many rules and regulations in the Indian economy associated with how you did things in the past which, if you change them, will make your economy grow and deliver more jobs, more wealth, more prosperity across your country. We should look at the things we need to do to take our barriers down, and we hope your government will do the same.”

The PM added in his speech to his Indian counterparts. 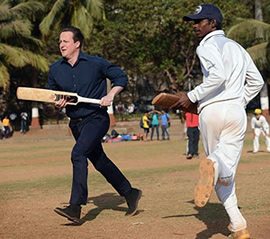 Manmohan Singh thanked Cameron for ‘strong personal commitment to India’ and said he had invited increased British investments in India, saying: “We expressed satisfaction with progress in our economic engagement, while stressing the need to do more to take the relationship to a new level.”

East End Foods sales director, Paul Deep, was part of the business delegation and he was impressed by the forums organised by UK Trade & Investment as part of the visit. “There’s a massive opportunity in India. We import raw materials from there, but we could actually re-export our products,” he said.

There is an expanding Indian middle class and Deep sees great opportunity within this market. “[The trade mission] took us to some supermarkets, I looked at the products on the shelves, at the quality and the packaging, and the expertise we have and the products we have to offer have a huge potential,” said Deep.

During his visit the Prime Minister took some time out of his gruelling schedule to take part in social activities. He played cricket with children from the Global Cricket School, demonstrating his own skills of the game. Cricket is a sport loved by every Indian; thus David Cameron used his time well to connect with these children from the slums.

Cameron paid particular emphasis on the cultural connections between India and Britain. He cited the example of Bollywood, which has a huge following in Britain. On his visit he met Bollywood actor Aamir Khan and they both attended a Q&A at Janaki Devi College in Delhi. 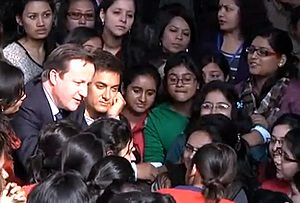 Both Khan and Cameron were mobbed by girls at the college and prompted Journalist and Chief Copy Editor Faye Remedios to tweet ‘Delhi’s Janaki Devi college girls – I can understand going nuts over #Aamir Khan but mobbing #David Cameron? Really? #newherosneeded

The actor tweeted after the meeting ‘It was a real pleasure to meet with Prime Minister @David_Cameron, and interact with the students at Janki Devi College.’

Cyber security was also part of the agenda. Cameron discussed with Manmohan Singh about the prospect of an agreement for the UK to share its expertise in tackling cyber threats, to better secure the increasing amount of business and personal data stored on servers in India.

“Other countries securing their data is effectively helping us secure our data. I think this is an area where Britain has some real competitive and technology advantages,” said Cameron. 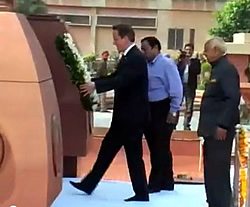 A notable visit made by the PM was to the Jallianwala Bagh in Amritsar, related to the Jallianwala Bagh Massacre, which occurred on 13th April 1919 during the British Raj. A shoot out orchestrated by Brigadier General Reginald Dyer resulting in 379 people being killed with 1100 left injured with women and children being many of the victims.

David Cameron is the first UK Prime Minister to have ever visited the site and said: “This is a deeply shameful event in British history, one that Winston Churchill rightly described as monstrous.”

Questions were raised why Cameron did not formally apologise for the atrocities that took place at the Jallianwala Bagh but many felt a visit by him to the site showed remorse towards what happened during a time when he was not a decision maker.

British Prime Minister David Cameron after his visit has high hopes for working closely with India to cement a stronger relationship and this visit seems to be a good bookmark for the start of this journey.

Sumera is currently studying for a BA in English. She lives and breathes journalism and feels she was born to write. Her life motto is 'You don't truly fail until you stop trying.'
Deana Uppal ~ A Rising Star
Children biggest victims of Forced Marriage