Cameron and The Kohinoor

Should the jewel in Britain’s crown return to India? David Cameron was challenged on his recent trip to India about the Kohinoor diamond. As Britain seeks beneficial trade with India, questions over ownership of this precious gem arise.

doubts over its true ownership

The Kohinoor diamond, meaning “mountain of light,” has a tumultuous history. Frequently passing hands as loot, it has belonged to the British since 1849, when the Punjab was formally proclaimed to be part of the British Empire in India. The diamond was given to Queen Victoria of England. Highly prized for its size and brilliance, the diamond is the centrepiece of the late Queen Mother’s crown.

India has repeatedly asked for the jewel to be returned, and David Cameron’s recent visit was no exception. However, he flatly refused to return the diamond.

The aim of the trip was to build stronger Indo-British business relationships. Several key ministers and over 50 leading business figures joined him. India is currently the world’s second fastest growing economy. By comparison, Britain is in its worst recession since World War Two. An alliance with India would benefit the UK, but it’s harder to see what India would gain. 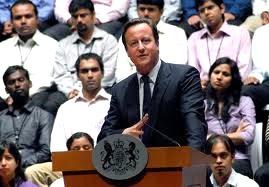 The Kohinoor diamond is not the only treasure Britain is withholding. As David Cameron himself pointed out, returning artefacts to their original countries would mean emptying the British Museum. Claims have been made for the Rosetta Stone and Elgin Marbles to be returned. Mr Cameron is loath to open the floodgates.

Another reason Britain is reluctant to give India the diamond is doubts over its true ownership. This is unknown as the Kohinoor passed hands numerous times. The stone has been the prized possession of various Hindu, Persian, Afghan, Sikh and British rulers. Also, India is not the only country claiming the gem. Pakistan made a request in 1976 for the diamond to be returned there. A major newspaper in Teheran stated that the gem should to be returned to Iran too. The British Government says that ownership is ‘non-negotiable’ as the Maharajah of Lahore presented Queen Victoria with the gem. 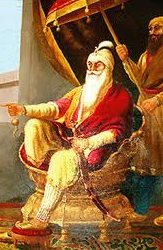 Others disagree. The Maharajah was forced to give the diamond away as part of the surrender agreement. It was originally taken from Shah Shuja-ul-Mulk by Maharajah Ranjit Singh, and later surrendered to the Queen of England as part of the Treaty of Lahore. The Governor-General overseeing the treaty considered the diamond to be a spoil of war.

Before the British got ownership of the diamond, it was in Mogul possession in Delhi for 213 years and in Afghan possession in Kandahar and Kabul for 66 years.

The Kohinoor left the shores of India on April 6, 1850, and reached London on July 2, 1850, when it was handed over to the Board of Directors of the East India Company.

The diamond was presented by Maharaja Ranjit Singh’s son and successor, Duleep Singh, to Queen Victoria in 1851 in England, as part of a pension deal.

Tushar Gandhi, Mahatma Gandhi’s great grandson, called for its return in 2009. He said that returning the diamond “would be atonement for the colonial past.” Recently Labour MP Keith Vaz has supported reinstating the jewel. Doing this close to the Indian Republic’s diamond jubilee “would be very fitting.” He added that the jewel’s return would improve Indo-British relations.

While Britain’s economy is suffering, India’s is growing fast. Improving bilateral trade was the goal of Cameron’s trip. He took the most important delegation to India since 1947 in a bid to lay “foundations for an enhanced relationship.” The group included business leaders such as John Varley, chief executive of Barclays, and Xavier Rolet, chief executive of the London Stock Exchange. BAE Systems, Europe’s biggest defense contractor, secured the trip’s key transaction. In an approximately $1.1 billion deal they agreed to supply 57 Hawk trainer jets to India.

At present foreign companies are strictly controlled in India. British banks, law and accountancy firms face harsh restrictions. British universities are as yet unable to establish campuses in India. In order for business relationships to flourish both sides need to compromise. With the Kohinoor raising potential problems, perhaps its time for Britain to make some tricky choices.

Roz is a writer who has travelled extensively in South-East Asia and Europe. Her passions are learning about different cultures, learning foreign languages and meeting new and interesting people. Her motto is "a journey of a thousand miles begins with a single step."
DEC Pakistan Flood Appeal
Abuse of UK Domestic Migrant Workers