Big B, Amitabh Bachchan was the guest of honour at 10 Downing Street in a reception held by David Cameron and his wife for Leicester’s diabetes charity, Silver Star.

"I am simply overwhelmed no actor has ever been given this privilege. I am blessed.”

Indian actor and Bollywood legend, Amitabh Bachchan was honoured at the House of Commons on September 12, 2013 for his humanitarian services.

Bachchan was in the UK as part of a charity enterprise that offers vital support to diabetes sufferers.

The Leicester based charity called Silver Star marked its sixth anniversary, and a great addition to the celebrations was the presence of the charity’s global patron, Big B himself.

“[The charity] works for the detection of diabetes at various centers and has mobile vans that run and perform simple detection tests on individuals. Diabetes is a ‘silent killer’, it erupts in the body and many do not know that they have the disease until it’s too late. 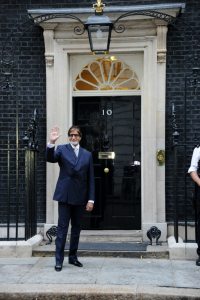 “Its detection and as early as possible, can then be treated within time to either defeat the ailment or keep it cautiously functional but in a manner that it never has adverse effects on one.”

The charity to tackle the disease was established by Rt Hon Keith Vaz MP from the House of Commons in his hometown of Leicester. Bachchan’s involvement began when he inaugurated the charity in 2007.

Diabetes is particularly common among South Asian communities in Britain, and around the world. According to a Diabetes UK report, currently 2.9 million people suffer from one for of Diabetes in the UK. Those of a South Asian descent are 6 times more likely to have the disease.

“Along with its patronage I have also helped it along financially. There is always some satisfaction when you associate yourself with such noble causes,” Bachchan added.

“I have been responsible for the 4 mobile launches so far! Thousands of people can get this detection process initiated and then if found to have the disease a cure is recommended.”

Bachchan was presented with the Global Diversity Award at the House of Commons, recognising his efforts in raising awareness around the long-standing issue of diabetes. 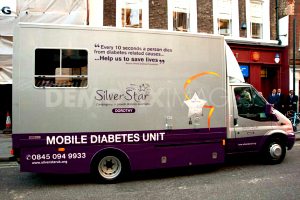 Rt Hon Vaz chaired the ceremony. The award was presented by the Speaker of the House of Commons, Rt Hon John Bercow MP who introduced the actor as ‘a Bollywood icon and the most famous Indian film star of all time’.

Bercow added: “Amitabh Bachchan is regarded as one of the greatest and most influential actors in the history of Indian cinema.

“He is a global patron for the diabetes charity Silver Star and last year was presented with a Mobile Diabetes Unit for his home city Mumbai, named ‘Amitabh’ in his honour. You have been a role model and Amitabh you deserve the award.”

On receiving his award, Bachchan humbly said: “I have been extremely overwhelmed by the love and affection of the people of Great Britain. It has been a great privilege and honour to visit various cities in helping people to tackle diabetes.”

Well-loved British and Hollywood actor, Hugh Grant was also present at the House of Commons ceremony. He said of Big B:

“It is truly a great pleasure meeting Amitabh Bachchan. He is a gigantic actor, a superstar who is hugely popular.

“He is also like a saint in some ways because of his charity and animal welfare work. If ever anyone deserves the Global Diversity Award, it is Amitabh Bachchan. Congratulations.”

David Cameron and his wife Samantha later held a reception for the charity where Big B was the guest of honour.

The actor and philanthropist was greeted by British Prime Minister David Cameron at his iconic home at 10 Downing Street.

The prestigious award ceremony and reception left Bachchan truly speechless. He later said on his Twitter page: “I am simply overwhelmed…no actor has ever been given this privilege…I am blessed.”

“Speakers House over 1000 years old, unimaginable structure and interiors … what an honour, a most rare opportunity to be there.” 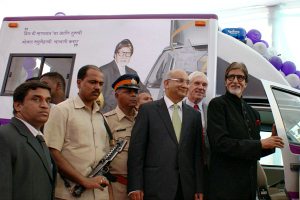 “And a rare visit to the Monarch’s bedroom! Where the to-be- Coronated King or Queen spends the night before the crown is put on,” he added.

Later he commented on his visit to 10 Downing Street: “What a moment to meet the PM, David Cameron and his charming wife who played host to us.”

“That doorway has seen the passage of time and the footfalls of some of the greatest in the Universe.

“The famous stairway lined with all the photographs of all the Prime Ministers and the various important rooms where decisions and conferences took place…such a honour for me to be decorated there,” Bachchan admitted.

Big B was all praise for the British Prime Minister and his hospitality throughout the evening. Cameron apparently told Bachchan that he had heard of the actor and his extensive legacy through his children’s nanny:

“Mr David Cameron was young and dynamic, his wife the perfect hostess and the people invited for the function, all luminaries,” Bachchan insisted.

The reception held by Cameron was also attended by a number of other celebrities, humanitarians and supporters of the diabetes charity. In addition, Reverend Jesse Jackson, the American civil rights leader was also present.

The award truly marks an impressive milestone for Big B. While he has been honoured for decades for his impeccable acting, Bachchan has finally received recognition for philanthropic and humanitarian work as well.

Aisha is an editor and a creative writer. Her passions include music, theatre, art and reading. Her motto is “Life is too short, so eat dessert first!”
Barclays bank close Cash Transfers Abroad
The Asian Achievers Awards 2013 Highlights