Some of the UK’s most successful Asians were out in full on September 6 in London for the Asian Achievers Awards 2013. DESIblitz went along to take a closer look at the action.

"We give ‘unsung heroes’ from the community an opportunity to be appreciated for their actual talents."

The swanky Grosvenor House Hotel in London was the venue of choice yet again for this year’s 13th annual Asian Achievers Awards on September 6, 2013.

The sophisticated black tie event was organised by the Asian Business Publications Ltd, (ABLP) who are responsible for Asian Voice and Gujarat Samachar. Mr CB Patel Chairman of ABLP commented:

“Asian Achievers Awards is much more than normal awards. It is unique and it is innovative. Unique because we receive nominations from our readers and members of the public. Innovative because first, we give ‘unsung heroes’ from the community an opportunity to be appreciated for their actual talents.” 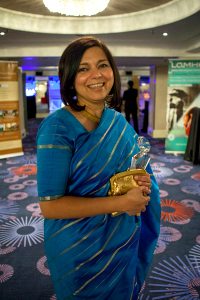 The grand doors of the hotel were opened at 6pm as the crème of Asian talent – be it in business, arts, sport or the community – were welcomed with champagne and canapés.

With this in mind, 2013’s event had some big shoes to fill but with award winning stand-up comedian Shazia Mirza and television journalist Ashish Joshi as presenters, it was off to a good start. It goes without saying that the two presenters have very different presenting styles. However, as a duo they were a good balance.

While Shazia Mirza provided the jokes, Ashish Joshi was the more informative throughout the evening: “As you can probably tell I’m the more serious one,” Ashish joked, at one point during the awards.

No event of this nature would be complete without exceptional presentation and catering. All tables were immaculately laid and had a glowing sphere shaped lantern placed in the middle. This added a touch of elegance.

The catering was plentiful and well received, from the canapés on arrival to the food served at the table. 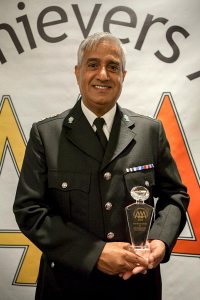 Glitzy and energetic entertainment was provided by dancers from AKADEMI. They displayed magical interpretations of dances made famous by Helen, Madhuri Dixit and Aishwarya Rai Bachchan, giving them all a twist of 2013.

As for the awards themselves, they were selected by a panel of independent judges and consisted of nine categories.

The first winner of the evening was actress Seeta Indrani in the Media, Arts and Culture Category. Seeta’s career highlights include being in the original cast of Andrew Lloyd Webb’s Cats (1981) to being in the television programme The Bill (1989-1998). On winning the award, she told DESIblitz:

“I think it’s very important for one’s community to recognise. I am very honoured that I have been chosen out of a very strong set of nominees. And especially, [since] we’re celebrating women’s achievements, it’s a great honour.”

Rajeeb Dey picked up the award for the Young Entrepreneur of the year. At just 27, he has created Enternships – a helping hand for students and graduates to find internships and jobs in over 5,000 companies.

Other winners included professional of the year Nadita Parshad for her work in European Bank for Reconstruction and Development, Chief Superintendent Surjeet Manku for Uniformed & Civil Services category, CEO of GibbsS3 Farida Gibbs for Woman of the Year and kickboxer Ruqsana Begum in the Sports Personality of the Year category. She told DESIblitz:

“Being recognised for this award automatically is going to encourage young people to get into sports because they will feel like we are being acknowledge and our achievements are being recognised. Hopefully they can look at me as an inspiration and I hope that I can act as a role model as well and live up to that expectation.”

The big award of the evening, The Lifetime Achievement Award, was given to the Hinduja brothers. They head up the global Hinduja Group which owns companies within many fields including gas, media and finance.

A main focus of this year’s awards was to recognise the achievement of women from Asian backgrounds and that many still rely on our support. With this is mind there was a charity auction in the aid of LILY Foundation, an anti-trafficking NGO.

“Awards like this celebrate the progress women have made… But there is still a long way to go, both in the Asian and wider community before all women receive equal treatment and respect in every profession they wish to follow.”

Congratulations to all winners from DESIblitz. Here is the full list of winners of the Asian Achievers Awards 2013:

The evening was certainly very enjoyable with very important messages for the whole British Asian community. We are already looking forward to next year’s event!

Vishal is a European languages graduate with experience in media. He enjoys theatre, film, fashion, food and travelling. If he could, he would be in a different place every weekend. His motto: "You only live once so try everything!"
Amitabh Bachchan honoured by David Cameron
Miss America Nina Davuluri in Racism Backlash