American born Indian, Nina Davuluri was crowned Miss America on September 15, 2013. Her title however resulted in a huge racist backlash on Twitter, where many refused to accept her as a fellow American.

“I have to rise above that. I always viewed myself as first and foremost American.”

Nina Davuluri made a huge impact on the Miss America pageant on September 15, 2013. She wowed audiences and viewers with her exotic chocolate-skinned beauty and Bollywood inspired performances.

The New Yorker danced her way to victory to win the acclaimed beauty pageant and made history on Sunday night as the first Indian-American to be crowned Miss America.

The Indian beauty, who was born in Syracuse, New York, comes from a Tamil background. She graduated from the University of Michigan and hopes to follow the family trend and become a doctor with her prize money of $50,000 (£31,000). 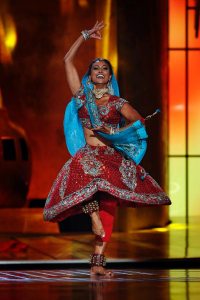 Davuluri, who has spent the past year preparing for the Miss America competition, had a very confident entry insisting: “Miss America is evolving. And she’s not going to look the same anymore.”

Nina most definitely did not have to chew her words as she wowed the judges with a Bollywood fusion dance, despite missing her cue at the event that was held in Atlantic City.

Winning a beauty pageant to represent your country should be the happiest day of your life. However, for 24-year-old Nina, it came with the added attention of vicious outcry from fellow Americans. 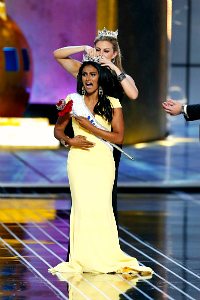 Shortly after her win, Twitter trolls took to the social media site and began their attack on her victory with racist tweets.

Some tweeted: “Miss America? You mean Miss 7-11.” Others went on to say: “I Am literally soo mad right now a ARAB won.” One tweeter also wrote: “This is Miss America… Not Miss Foreign Country.”

However, Nina’s supporters were also quick to defend her. One tweeter responded to the attackers: “Wow the hate that has come out since an Indian American won Miss America is sad. Guess we haven’t come that far after all.”

Davuluri, meanwhile, brushed off the racist remarks on her first day as winner. Speaking about the comments, she said: “I have to rise above that. I always viewed myself as first and foremost American.”

Outside of America, reaction to her winning was huge news. In India however, much of the celebrations were marred by the Western reactions. The Times of India later wrote: 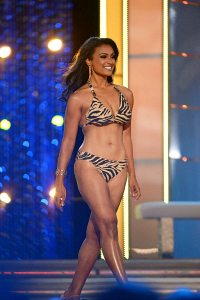 “The tiara had barely been placed on her head and the customary tears of joy had just emerged when racist taunts erupted on social media, marring the moment of triumph for the first ever Miss America of Indian origin.”

The Hindustan Times added: “A 24-year-old from New York made history Sunday night as the first Indian American to be crowned Miss America, but was hit instantaneously by a racist backlash.”

The racist remarks has created quite a media debate across the globe, with many now questioning the supposed tolerance that some American’s have for other ethnicities within their own country.

Nina herself commented on the outcome of the beauty contest, admitting she was ‘so happy this organisation has embraced diversity.’

Professor at Lehigh University, Amardeep Singh, admitted that the result had generated from a new South Asian thinking that was spreading across America:

“It’s a relatively new phenomenon that Indian-American women would even think of themselves as potentially having a chance.” 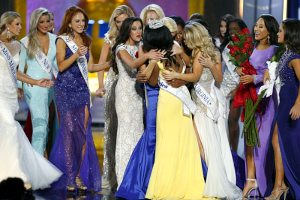 “It’s the way things are changing in America. The Indian community is becoming more comfortable in its skin,” Singh added.

“The United States, at the end of the day, is a country that represents diversity and inclusion and a sort of coming together of the world in some of the most incredible ways.

“So having an Indian-American win this very symbolic moment is challenging some very fundamental notions of American identity in a way they haven’t been challenged,” she said.

For Nina, challenging stereotypes is something she is definitely comfortable with. Now with the Miss America tiara firmly on her head, she can happily embrace both her Indian ethnicity and American nationality. The Miss America 2014 beauty will continue her national media tour in her home city of New York.

Huda is a travelling journalist. After spending a year and half in China, she is planning her next travel destination. Huda is a bit of foodie and loves trying out new restaurants. Her motto is 'everything happens for a reason.'
The Asian Achievers Awards 2013 Highlights
English Asian Business Awards 2013 Finalists