Shree Saini was crowned Miss World America 2021. She becomes the first US Indian to win the prestigious pageant.

"Thank you Miss World America for this honour."

Shree Saini has become the first American Indian to win the Miss World America beauty pageant which first began in 1951.

The model was born in Ludhiana in Punjab and moved to Washington state with her family at the age of five.

She was crowned by Miss World America 2021 by former Miss World and actress Diana Hayden in Los Angeles, California.

Speaking of her win, she said: “I am happy and quite nervous. I can’t express my feelings (in words).

“All the credit goes to my parents, especially my mother because of whose support I am here.

“Thank you Miss World America for this honour.”

The 25-year-old was born with a heartbeat of just 20 beats per minute and given a permanent pacemaker when she was 12-years-old.

Saini also suffered serious facial burns after a major car accident, with doctors telling her that she would need a year to recover.

However, she resumed journalism classes at the University of Washington just two weeks after and later graduated from there.

The model has been an ambassador for heart and mental health and also gives motivational speeches following her experiences. 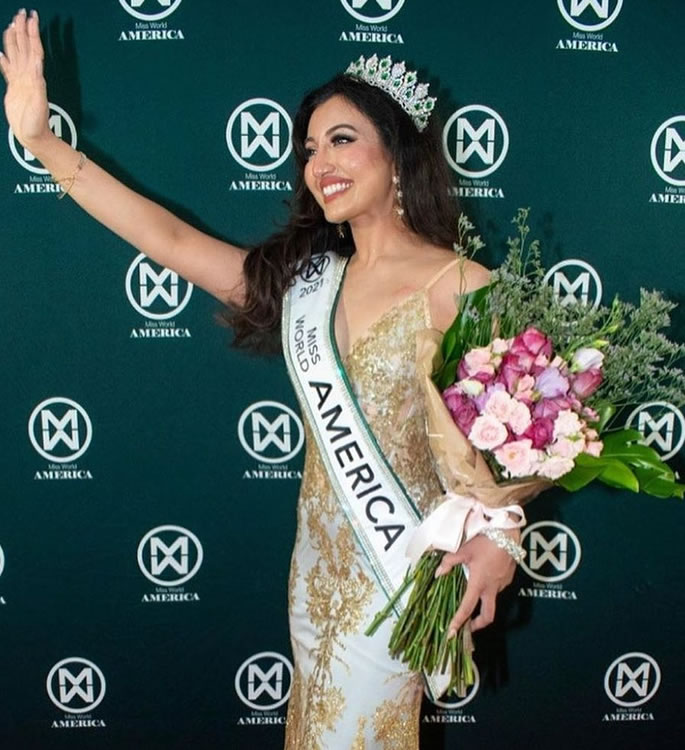 Posting on Instagram, Saini said: “Thank you God for blessing me with the service job of Miss World America 2021.

“I feel so endlessly grateful to everyone who has held my hand, encouraged me, corrected me when needed, and guided me on my life journey.

“It’s not just my win, but OUR collective win: it’s a win for our inclusive and diverse “America” for every race, for every culture, for everyone.

“It’s a win for endless kindness, resilience and perseverance in tough times.”

Miss World America is the national preliminary round before winners are sent to the Miss World International competition.

The US has sent a representative every year since being founded and won the crown three times in 1973, 1990 and 2010.

The pageant organisers said in a statement:

“Shree, who is currently Miss World America Washington, also holds the prestigious position of ‘MWA National Beauty with a Purpose Ambassador’, a position she earned by working tirelessly to help those less fortunate and in need.

“Among her many accomplishments, her work has been recognised by UNICEF, Doctors without Borders, Susan G Komen, and many others.

“We are certain Shree will continue to immaculately embody Beauty With A Purpose, and no doubt will be successful in raising awareness and attention to the Miss World America mission.”

Naina is a journalist interested in Scottish Asian news. She enjoys reading, karate and independent cinema. Her motto is "Live like others don't so you can live like others won't."
Minister calls for Teacher Training on Children’s Mental Health
Priyanka Chopra Jonas shares Day to Night Makeup Look