Highlights of the GG2 Leadership Awards 2013

The GG2 Leadership Awards 2013 were held on November 27, 2013 in Central London. The evening saw a huge gathering of leading members of the Asian and ethnic community, celebrating some extraordinary achievements. DESIblitz were there amongst all the action.

“I don’t believe I am a hero, I think I did what any other normal person would have done.”

The prestigious GG2 Leadership Awards champions the achievements of different communities in the UK.

Now in its 15th year, the awards show no signs of slowing down. In fact they are becoming bigger and better! DESIblitz went along to meet the winners and catch the action.

On a frosty November evening, nothing beats rocking up at a glitzy awards ceremony.

Public figures such as Keith Vaz MP, Preeya Kalidas, Goldy Notay, Asad Shan and Laila Rouass swarmed the red carpet at the Westminster Park Plaza, London. All were eager to recognise and support our communities’ achievements. 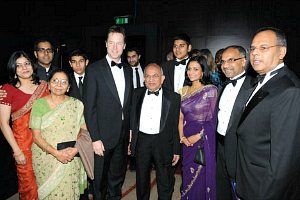 This after all is an awards ceremony with a difference; honouring everyday people doing incredible things.

“We’re looking to recognise the best in everyone and tell people that whatever they are and whatever they are doing, it is possible to reach the heights they aspire to. Tonight’s winners are examples to us all.”

DJ and presenter Nihal from the BBC Asian Network hosted this year’s ceremony: “I was honoured to be invited by the Solanki family and I’m looking forward to the night,” he told DESIblitz before he took to the stage.

He certainly lived up to audience expectations. He brought a lot of energy and comedy to the show: “They normally only let one Sri Lankan it at ceremonies such as this. It was either me or George Alaghia,” he joked.

Entertainment came in the form of stand-up comedian Inder Manocha and a live jazz band. The band, fronted by Patrick Alan, kicked off the show and played music in between some of the awards and speeches.

The first award of the evening was the Spirit in the Community Award, won by Ingrid Loyau-Kennett. She courageously confronted two men armed with knives and a gun during a Woolwich attack. Ingrid was extremely modest on receiving the award:

“I don’t believe I am a hero, I think I did what any other normal person would have done,” she said.

Ritula Shah picked up the Media & Creative Arts Award for her work as a journalist and news presenter. She admitted to DESIblitz that the schedule of a news correspondent really is as hectic as it looks: “I admit that sometimes you do work eighteen hour days, but I enjoy it and that’s what keeps me doing it!”

GG2 Man of the Year was won by Professor Tejinder Virdee, who has been a professor of Physics for the last thirty years.

GG2 Woman of the Year was given to Christine Lee who founded the largest British Chinese law firm in the UK. She told DESIblitz that this award was ‘dedicated to the British Chinese community who are still very much unheard of in society’.

The most important achievement for many was that of Malala Yousafzai and her two friends, Kainat Riaz and Shazia Ramzan. They showed exceptional bravery in standing up against Taliban rule in their village in Swat Valley, Pakistan.

The girls now campaign for women’s rights. They were honoured this evening with the Hammer Award. Malala also topped the GG2 Power 101 list which captures the 101 most influential Asians in the UK.

As well as the awards, the speeches were a key part of the night. It came as no surprise that chief guest Nick Clegg’s speech commanded the full attention of the audience:

No event of this kind is complete without a mouth-watering menu. The catering at this year’s GG2 Leadership Awards provided by Madhu’s definitely ticked all boxes. Guests were wowed with dishes including salmon tikka canapés, mattar paneer and the heavenly butterscotch pot de crème.

The full list of winners of the GG2 Leadership Awards 2013 are as follows:

The awards demonstrate yet again that ordinary people are doing extraordinary things. By recognising and celebrating these achievements, we are hopefully making the sheer hard work of the all those nominated worthwhile. Congratulations to all winners.

Vishal is a European languages graduate with experience in media. He enjoys theatre, film, fashion, food and travelling. If he could, he would be in a different place every weekend. His motto: "You only live once so try everything!"