Christmas is a time for families, friends and social gatherings plus lots of food and drink! DESIblitz explores how British Asians enjoy the festive period.

Christmas is not only celebrated by non-Asians, but by British Asians too.

It’s that time of year again where the tree goes up, presents are bought, feasts are made and families get together.

Christmas is a holiday celebrated by all and has become a tradition for many British Asians as more and more decide to celebrate it.

The 25th of December in the Gregorian calendar marks Jesus Christ’s birth, which is celebrated by Christians. Over the years, as culture and traditions merge together, many non-Asians also celebrate this holiday with their loved ones.

Many Christians commemorate Christmas Day by attending special church services, going to family get-togethers, wearing new clothes and eating a festive meal. There is also the convention of gift giving where presents are given.

Many communities show Nativity plays that depict the story of the birth of Christ, which are often performed around Christmas. Festive carols are sung and it’s also a very charitable time.

Christmas is celebrated in all parts of South Asia, with varying styles and customs. In India, Christmas trees are usually imitation pine trees or branches of native trees or bushes. 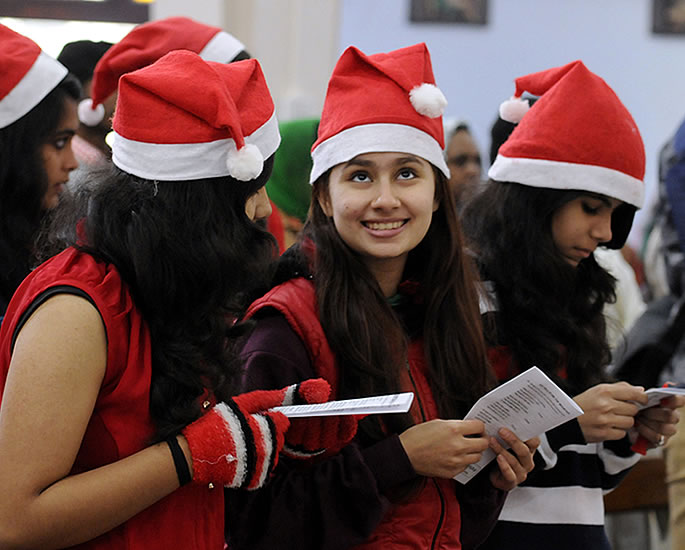 The number of Christians in India is around 25 million. But despite the number, Christmas still remains a relatively small festival in India.

If there isn’t a traditional Christmas tree available in India, a banana or mango tree is decorated and the leaves are used to decorate homes.

In Southern India, people often put small oil burning clay lamps on the roofs of their homes to symbolise that Jesus is the light of the world.

“We always contact our family abroad in the UK, even if they can’t come out to see us or vice-versa.

“Christmas has become a universal holiday, one for everyone to celebrate and appreciate each other, regardless of distance.”

In Pakistan, December 25 is a public holiday, but it is in memory of Muhammad Ali Jinnah, the founder of Pakistan. In the big Christian areas, as well as the houses being brightly decorated there are stars on the roofs of people’s homes.

The day remains somewhat as a ‘funfair’ with people staying in the Church courtyard for hours, enjoying various foods from the different stalls.

For most South Asians the holiday is usually spent with immediate family or relatives and families visit each other.

So what happens in the UK?

In 2012, Minister for Faith and Communities, Baroness Warsi insisted that more ethnic communities should embrace a traditional Christmas, and ‘not water-down’ the otherwise religious Christian festival.

Despite Warsi’s comments to support unity, many British Asians already have taken to the Christmas spirit with open arms. In the UK, Asians love to join in with the festive season. 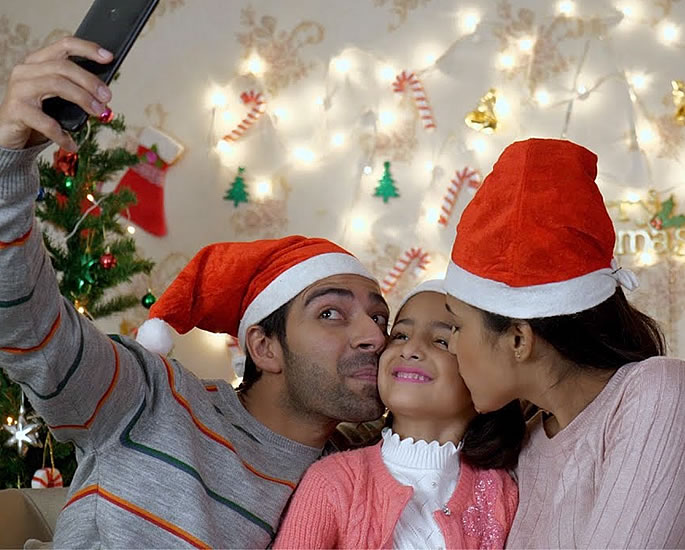 For most, it too is a time of holidays from work, study and routine, and a chance to meet up with friends and family.

Most people will get together with family on Christmas Day, and some family members (usually the ones with the most culinary experience) take it in turns each year to host the holiday festivities.

A Christmas tree is put up and is colourfully decorated and lit up with tons of presents stacked underneath.

A huge meal is prepared, this could either be the traditional Christmas meal, which has all the trimmings, or something completely different can be cooked up with a Desi twist.

Christmas dinner was traditionally made up of roast beef or goose; although nowadays it is common to have turkey, roast vegetables and ‘all the trimmings’. This includes stuffing and sometimes bacon and sausages.

Turkey made with a tandoori flavour and rubbed in masalas is quite a popular dish in British Asian households due to normal turkey being quite dry and bland. Many households cook chicken instead of turkey too due to this.

Dessert is often Christmas pudding, mince pies and lots of chocolates are often eaten as well. Including opening those selection boxes given as presents and not passed on!

But there is bound to be a serving of Desi sweets, rasmalai, gulab jabun and jalebis too, for those in need of a real sugar fix! 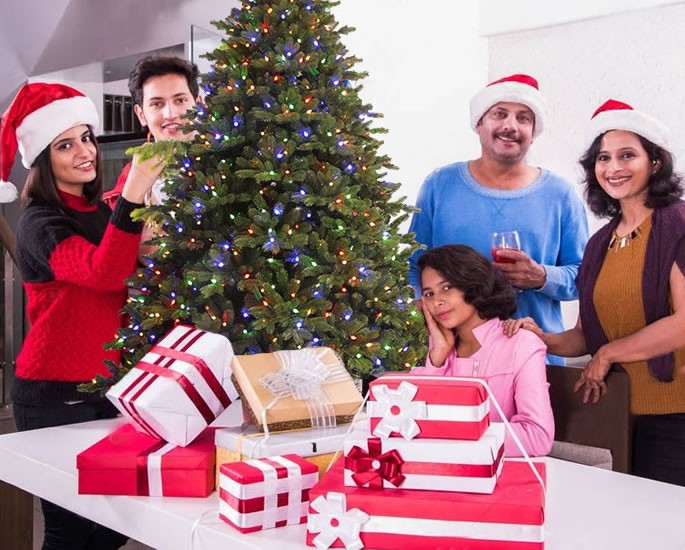 One British Asian from Birmingham says:

“I can’t get enough of Christmas time.

“My brother prepares the turkey, and I do the veg.

“We have a big family so we have to make a lot of food. We can expect at least 40 people round our house.

“Not everyone likes turkey so we’ll make roast chicken and beef as well. There’s usually something for everyone!”

Games are often played with the families teaming up against each other and gifts are given.

It is also important as it marks quality family time, it’s the time of year where long distant relatives are contacted and bonds are strengthened.

“For us, we love to get into the spirit of Christmas, we have a full on Christmas meal and have everyone round at our house…we also play games such as Pictionary and Password and we never fail to phone or skype our family abroad.”

Of course, as is with any family get together, especially among the Asian community, a true family spirit can emerge in other ways. With uncles and the elders drinking more than they should, drunken arguments and melodrama are just another Christmas tradition.

Not to mention the countless little cousins running through the house playing games, while the aunties sit and gossip in the kitchen. But what would a Very British Asian Christmas be without any of this?

Hence, Christmas is celebrated by British Asians in its own unique Desi way. And not only just by Christians but by people from other faiths too, who see it as a social occasion and not a religious one.

For all who celebrate,  it’s a festive time, a time for family and friends to gather and spend the day together.

Meera grew up surrounded with desi culture, music, and Bollywood. She’s a classical dancer and mehndi artist who loves everything connected with the Indian film and television industry and the British Asian scene. Her life motto is “do what makes you happy."
Highlights of the GG2 Leadership Awards 2013
Asian Doctors face Racism within NHS