Winners of the GG2 Leadership Awards 2014

The 16th GG2 Leadership Awards celebrated the successes of the British Asian community and the contributions of some outstanding individuals. Also unveiled was the 4th edition of the GG2 Power List for 2014.

"One day I want to hear that title 'Prime Minister' followed by a British Asian name."

The evening invited a myriad of British Asian and non-Asian personalities to celebrate Asian success in all sectors of society.

Guests included popular musician Jay Sean who has just released his new track, ‘Tears in the Ocean’; Manish Bhasin from BBC’s Football League Show; as well as a number of MP’s including Keith Vaz and Culture Secretary Sajid Javid.

Of the high profile guests and senior politicians attending was Prime Minister David Cameron. In an engaging 10-minute speech, Cameron welcomed guests and addressed some of the key issues that the Asian community were facing today: 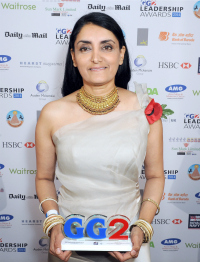 “Let us think big about what Britons of all backgrounds can achieve,” Cameron said. He also enthusiastically called for a future British Asian Prime Minister to lead the country:

Under the wing of the Asian Media & Marketing Group (AMG), the GG2 Leadership awards are now in their 16th year. The awards recognise some of the truly outstanding individuals of the British Asian community.

Managing Editor of the AMG Group, Kalpesh Solanki added: “There is an important and positive side to immigration which we should be celebrating and talking about.

“We must remember immigrants create jobs as well. From the Asian Rich List we have businesses that collectively employ millions of people, pay billions in taxes and have become great corporate citizens.”

In total, there were 12 awards given out, including the ‘Spirit in the Community Award’, which was given to Freedom charity founder, Aneeta Prem. The ‘Media & Creative Arts Award’ was won by popular radio presenter and British Asian personality Nihal Arthanayake. 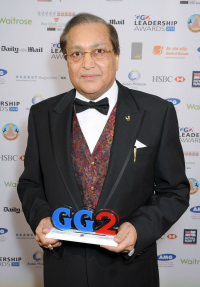 The ‘Inspire Award’ was given to the well-deserving Parmi Dheensa, the founder of Include Me Too, a charitable organisation working closely with families with disabilities.

Also winning were popular Scottish Asian chef, Tony Singh, taking the ‘World Food Award’; while Dame Asha Khemka was awarded ‘Woman of the Year’. The late Flt Lt Rakesh Chauhan was awarded the prestigious ‘Pride of Britain’, and the ‘Hammer Award’ was given to Amol Rajan.

The GG2 Awards also saw the unveiling of the annual ‘Power List’. The GG2 Power List charts the most influential and powerful Asians in the UK.

Taking the crown in 2013, was recent Nobel Peace Prize winner Malala Yousafzai, whose tireless efforts campaigning for human rights has made her one of the most visible teenagers in the world.

But taking the top spot for 2014 was Culture Secretary, Sajid Javid. In his speech, Mr Javid addressed the guests saying: “Culture is more than a privilege. It’s at the core of who we are and how we define ourselves.

David Cameron supported fellow Conservative Javid, and it is thought that the idea of a British Asian Prime Minister may not be too far a truth, as Javid is expected to be Cameron’s successor as the Conservative Party leader.

Cameron said: “If you’re on the Power List, you have the power to inspire. If you’re nominated for an award, you can encourage others to follow your lead.”

Here is the full list of winners of the GG2 Leadership Awards 2014:

The GG2 Leadership Awards 2014 highlight the significance of the community coming together to recognise achievement, and it is certainly evident that British Asians have much to celebrate. Congratulations to all of the winners!