The bravery of certain sports people has come to light amid the COVID-19 crisis. We look at the achievements of 5 Indian athletes on police duty.

"sometimes it helps my work when they see my nameplate."

Several Indian athletes have been successful in sports and as senior ranking police officers on the frontline of COVID-19.

These Indian athletes have accomplished glory across a range of sports, including boxing, cricket and hockey.

The likes of Joginder Sharma and Ajay Thakur have been fortunate to lift the world cup when representing their national sides.

Sporting achievements of these Indian athletes have led them to join the police force and become heroes of the real world.

As police officers, they share one commonality – that is playing a pivotal role to combat the COVID-19 pandemic.

Whilst policing the streets of India, they are also advising people to stay safe at home. Some are also delivering essential items to the needy as well.

We highlight the achievements of 5 Indian athletes, along with their fearless endeavours during tense and challenging times of lockdown. 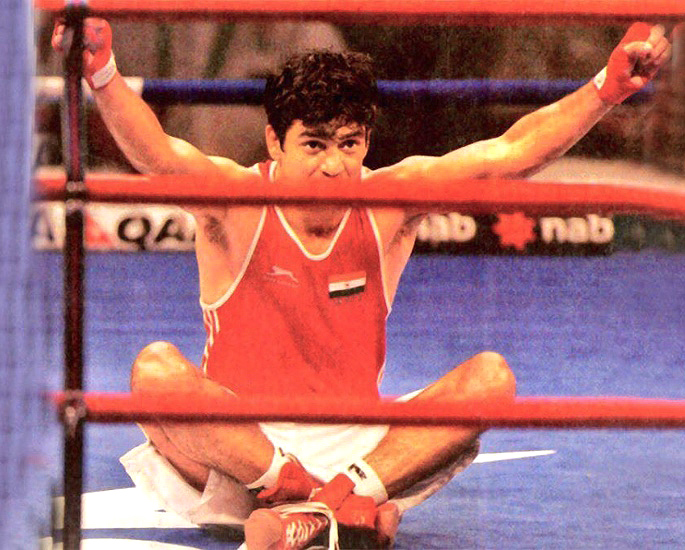 Boxing gold medallist Akhil Kumar is on the police frontline due to the COVID-19 pandemic.

The flamboyant boxer made his name in history after winning gold at the 2006 Melbourne Commonwealth Games.

Competing in the 54kg Bantamweight division, Kumar beat Bruno Julie (MRI) by 21 points to 12 in the final.
In the opening round, Kumar hit six blows to his opponent without reply. Despite the second round being closer, Kumar edged it 5-4.

With further improvements, Kumar won round three, 6-4. Even though he lost the final round 3-4, he was successful in evading the costly single punch.

In the final, Kumar was fighting from the red corner at the Melbourne Exhibition Centre. He also bagged a bronze medal at the 2007 Ullan Bator Asian Amateur Championships.

Recognising his boxing achievements, he was given the prestigious Arjuna Award in 2005.

Kumar who serves as Assistant Commissioner of Police (ACP) under the Gurugram Traffic department in Haryana is doing his bit during the national lockdown.

Whilst inside his official vehicle on the Delhi-Jaipur Highway, Kumar helped a migrant working family, helplessly walking with some luggage:

“I stepped out of the car and offered them some biscuits and water—whatever I had at that point of time.”

For those stuck at home without any money, Kumar has also been supplying them with food:

“Instead of getting them packed food, we give them ration. Not only is that cheaper, but is more in quantity, as well. Every day we are able to give some 70-80 packets. Each packet contains, atta, rice and dal.”

Coming from a sports background, he understands the virtues of patience when aiding the underprivileged. 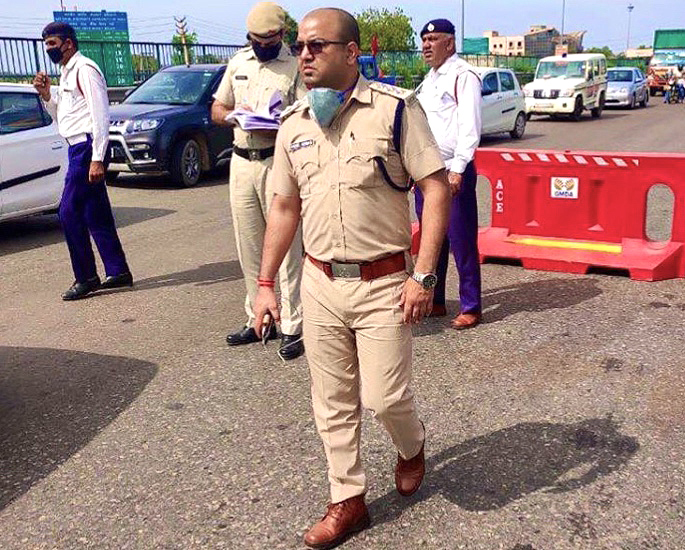 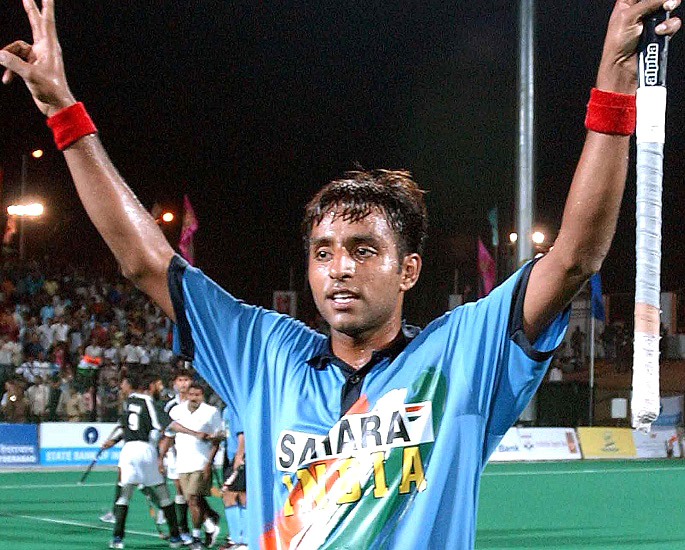 Former Indian hockey star and high ranking police officer Gagan Ajit Singh has had a major contribution in the fight against COVID-19.

Making 200+ appearance for his country, Gagan collected a gold medal with Team India at the 2001 Men’s Hockey Champions Challenge.

In the penultimate pool game against Argentina, he scored the winner in the 32nd minute. India won this crucial game 2-1, to reach the final.

India clinched the trophy versus South Africa, beating them 2-1 at the Malaysia Hockey National Stadium, Kuala Lumpur on December 15, 2001.

The forward also scored two goals in a famous 7-4 win against  Pakistan. This is during India’s final pool game of the 2002 Men’s Hockey Champions Trophy.

Gagan on a rampage found the back of the net in the 60th and 62nd minute of the game.

Working for Punjab Police as Deputy Commissioner of Police (DCP) in Amritsar, Gagan is actively responsible for law enforcement during the COVID-19 outbreak.

The generous Gagan has also been dispersing parcels of food to those in need. Speaking about his responsibility and having adequate protection, he told Hindustan Times:

“The risk is high but duty comes first. We are taking all necessary precautions.”

Gagan is certainly leading by example, safeguarding himself and others in tough conditions. 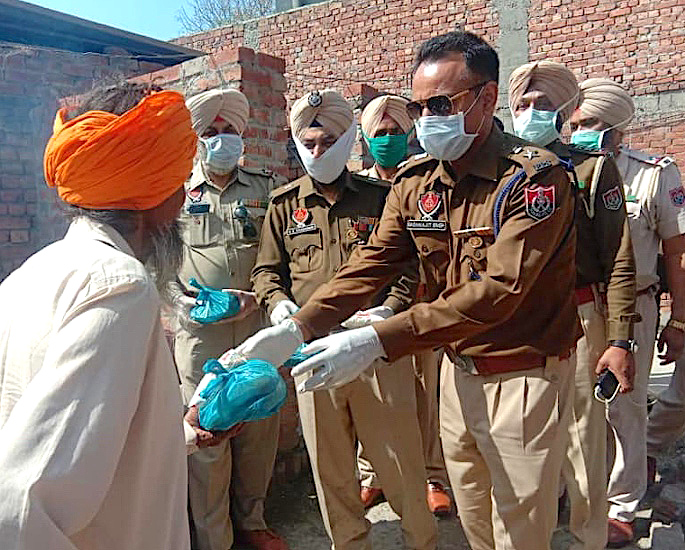 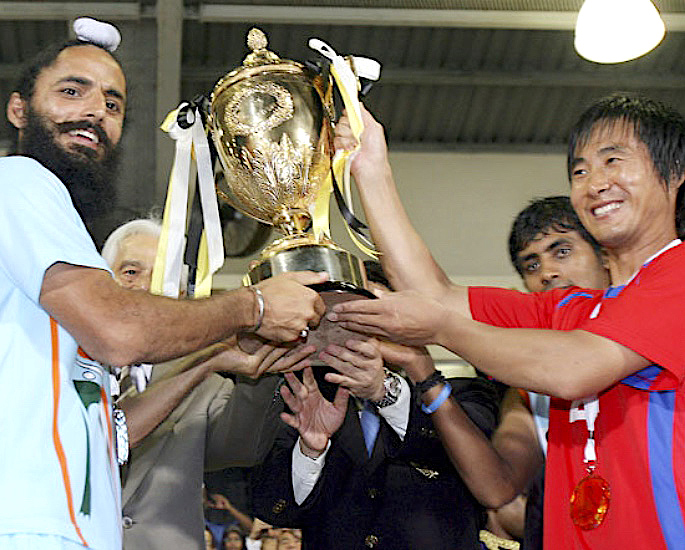 The halfback player led the Men in Blue to gold the 2010 SultanAzlanh Shah Cup. He scored two goals during the pool stage of the competition.

His first goal came against Australia in the 21st minute to give India a 2-0 lead. The final score was more close, with India victorious 4-2.

His second goal came in the 7-1 demolition of Egypt during the final pool phase game of the tournament.

Rajpal got onto the scoresheet in the 44th minute, following a terrific hat-trick from Dhananjay Mahadik.

With the abandoning of the final after just over six minutes of play, both India and South Korea were confirmed as joint winners. Hence, players from both teams picked up gold medals.

Acknowledging his excellence in field hockey, Rajpal received the impressive Arjuna Award in 2011.

Employed by Punjab Police as a Deputy Superintendent of Police (DSP), Rajpal is leaving no stone untouched in the battle to control the coronavirus.

The Provincial Police Service (PPS) Officer is posted in the Mohali district. He had his work cut out during the early days of the nationwide emergency protocol:

“We had a tough time in making people understand the difference between lockdown and curfew. At times we had to impound vehicles.”

Similar to Gagan, Rajpal had also facilitated food and necessary items for shanty areas under his jurisdiction.

“Many hockey players approached me and said that they want to contribute in providing food to the underprivileged.

“We have identified 30 families that will contribute funds to feed the needy.”

It is a noble act by Rajpal and others to help the poor at such a critical time. 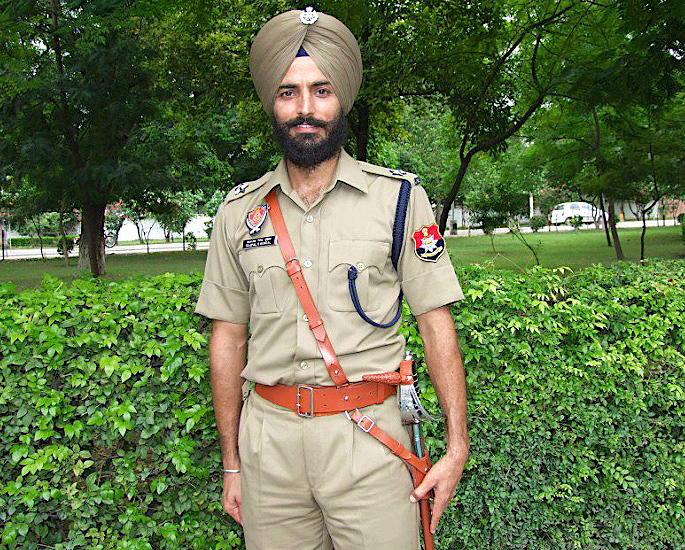 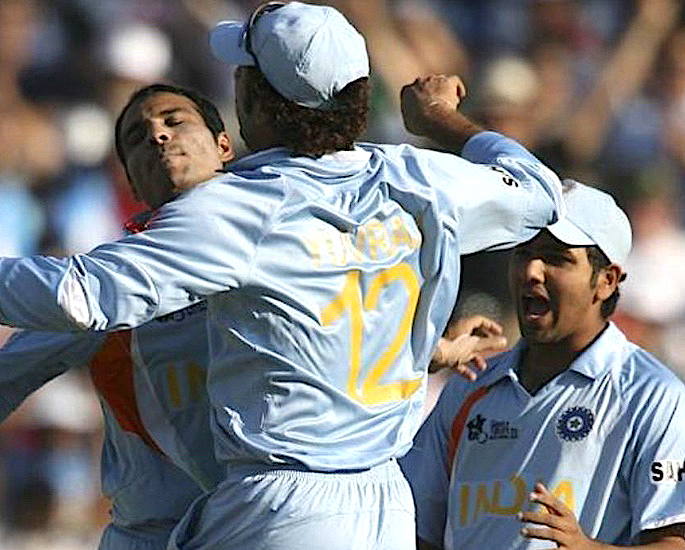 Sharma became the face of India after famously bowling India to victory in the 2007 ICC T20 Cricket World Cup against arch-rivals Pakistan.

With Pakistan needing thirteen runs off the final over, Sharma took the crucial last wicket of Misbah-Ul-Haq on his third delivery.

There were unbelievable scenes at the Wanderers Stadium Johannesburg, South Africa on September 24, 2007. Indian fans in the stadium, back home and all over the world celebrated the nail-biting win.

Despite playing cricket until 2017, Sharma became a lead ranking police officer in 2007.

Whilst on patrolling duty, he is making sure that citizens are adhering to the government’s safety guidelines. He admits that his cricket status is proving useful when guiding people:

“They respect me for my achievement and sometimes it helps my work when they see my nameplate.

“When I tell people to not crowd markets for cheap deals, they adhere. I tell them how costly it would be if they catch this infection, that they should not risk a deadly disease for saving a few bucks

He believes social distancing is very important. He has had to humbly decline selfie and autograph requests from his cricket fans:

“There have been many occasions when I am briefing people on how to tackle coronavirus and they have taken out mobiles and started taking selfies.

“I discourage it and ask them to concentrate on what I am saying.”

Even the International Cricket Council (ICC) has lauded the efforts of Sharma in the line of duty.

Sharing images of Sharma celebrating with fellow cricketers and in uniform wearing a mask, the ICC tweeted:

“In his post-cricket career as a policeman, India’s Joginder Sharma is among those doing their bit amid a global health crisis.”

According to Sharma, the viral photos of him on socia media are spreading a positive message. 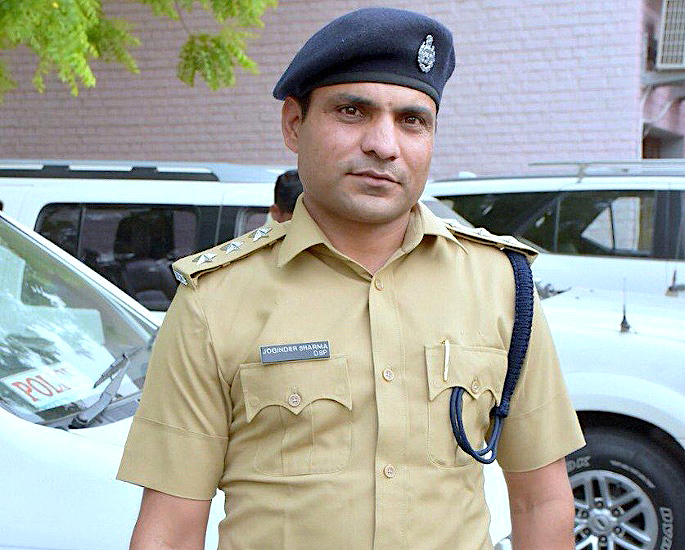 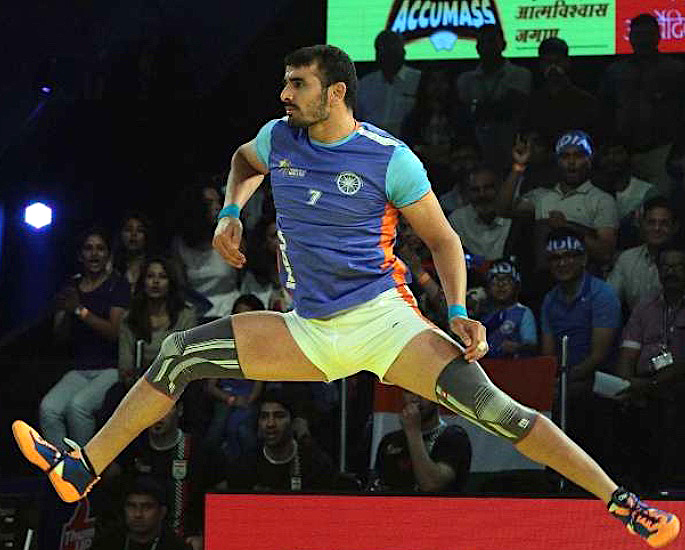 Kabaddi World Cup winner Ajay Thakur is a senior police official at the forefront of the COVID-19 health crisis.

Thakur was instrumental in India’s 2016 Standard Style Kabaddi World Cup triumph at home. Thakur was the leading raider in the tournament, accumulating sixty-eight points in total.

In the final, at one point the home side was trailing, but a 4-point scoring raid from Thakur gave the initiative back to India.

India became world champions for the third time after defeating Iran closely 38-29. The match took place at The Arena, Ahmedabad on October 22, 2016.

It was double celebrations for Thakur as he bagged the man of the tournament award too.

Thakur also has a gold medal from the 17th Asian Asian Games Incheon 2014 where India narrowly overcame Iran 27-25 in the final.

As the functionary DSP in Himachal Pradesh, Thakur has been spotted manning streets of Bilaspur in Chhattisgarh state. 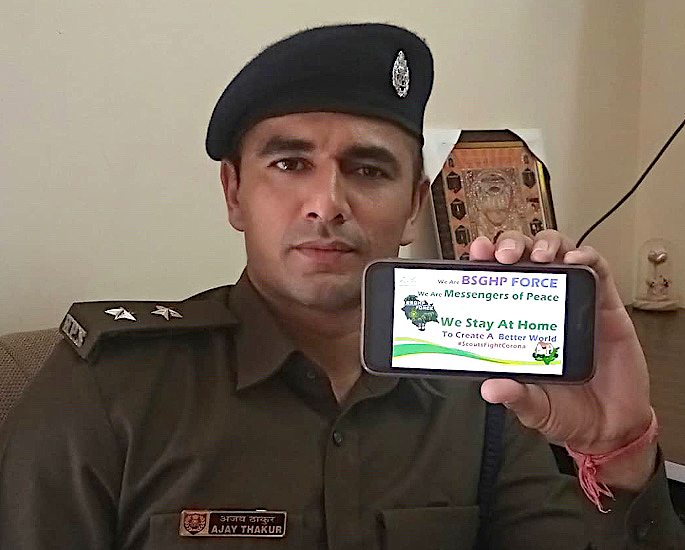 He is keeping his safety in mind, whilst guarding others.

Thakur is also using his official Instagram account to educate people about the COVID-19 outbreak via video messages.

In one Instagram post, Thakur is seen requesting his fans to stay indoors and conform to orders from the federal government. He expresses that preventive measures will ensure the safety of every individual.

Jitender Kumar, who claimed a bronze medal in the Flyweight 51 kg category at the 2006 Commonwealth games is also fulfilling his duty as a policeman.

The Rewari posted police officer purchased food and sanitizers for the most deprived people.

All the Indian athletes mentioned have achieved a lot both inside sports and in the real world. DESIblitz would like to salute all these Indian athletes for their sheer hard work and determination.