Aziz Ansari has responded to the sexual assault allegations made against him. He claims that the encounter was “completely consensual”. It has now sparked a growing debate on social media.

"We ended up engaging in sexual activity, which by all indications was completely consensual."

After accusations of sexual assault were made against him, Aziz Ansari has now responded. He claims that the encounter detailed by a 23-year-old female photographer “by all indications was completely consensual”.

The Desi American gave his comments via his publicist in a statement, sent to Variety, People and various US magazines.

The statement reads: “In September of last year, I met a woman at a party. We exchanged numbers. We texted back and forth and eventually went on a date.

“We went out to dinner, and afterwards we ended up engaging in sexual activity, which by all indications was completely consensual.”

Aziz also confirmed a text exchange did take place between him and the woman. “The next day, I got a text from her saying that although ‘it may have seemed okay,’ upon further reflection, she felt uncomfortable.

“It was true that everything did seem okay to me, so when I heard that it was not the case for her, I was surprised and concerned. I took her words to heart and responded privately after taking the time to process what she had said.”

Here is his statement: 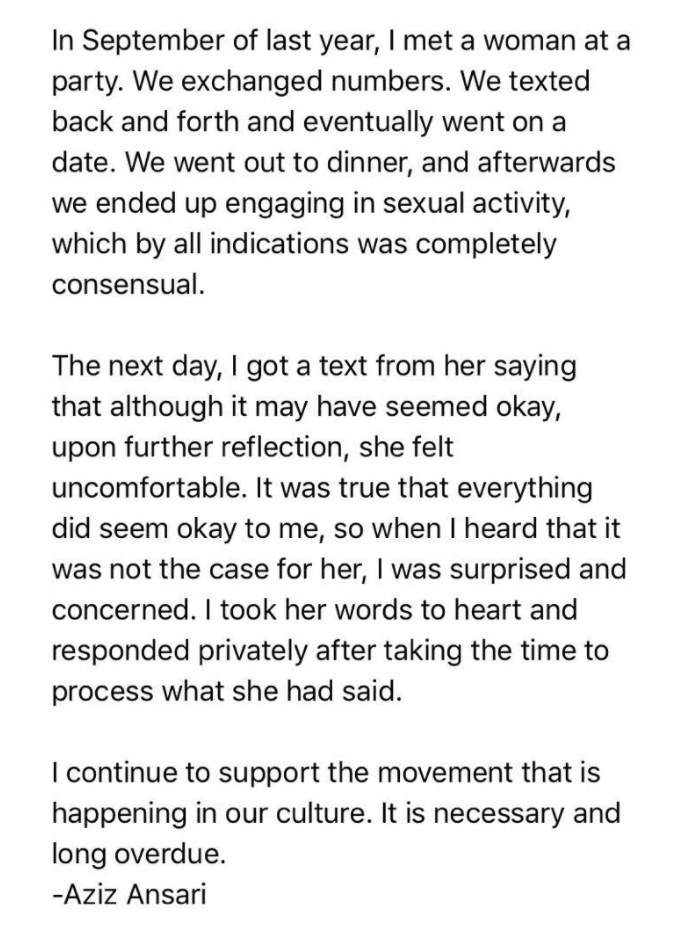 His response came on 14th January 2018, hours after Babe.net published the alleged incident recalled by an unidentified woman, her name changed to Grace. She claimed that during a date with Aziz in September 2017, he made an alleged series of unwanted sexual advances towards her.

She also described it as “by far the worst experience with a man I’ve ever had”. The story came out after Aziz won ‘Best Actor in a Comedy Series’ at the Golden Globes 2018, which Grace said to Babe.net:

“It was actually painful to watch him win and accept an award. And absolutely cringeworthy that he was wearing the Time’s Up pin.”

However, in Aziz’s statement, he explained he would continue to support anti-sexual assault movements:

“I continue to support the movement that is happening in our culture. It is necessary and long overdue.”

The incident has sparked a huge debate amongst Twitter users – with opinions dividing on whether it counts as sexual assault. Some have dubbed the incident as “a bad date” and suggesting that the line of what constitutes as sexual harassment has gone overboard.

In addition, others have also raised concerns that movements such as #MeToo could be at risk of turning into ‘bandwagons’.

We may still be teaching men like #AzizAnsari about consent, but accusing a man of sexual misconduct comes with a responsibility to the truth. Sorry, but bad foreplay does not constitute sexual harassment and #MeToo is not a bandwagon that every woman has to jump on.

I’m getting nervous… Victims of sexual assault want justice. I get it, I support it. A bad date with Aziz Ansari is not a crime and should not be used to ruin his career. Women are starting to go too far in some cases, #AzizAnsari

The incident is, in some respects, different to the claims made against Hollywood figures such as Harvey Weinstein. As it takes place in the context of a date, rather than in the workplace. However, some have pointed out how it reflects the concerning issue of consent.

They also believe it highlights how women may feel coerced into sexual activity they may not actually want to partake in.

Besides showing zero empathy, asking why she didn’t ‘just leave’ demonstrates a complete lack of understanding about trauma and how women are socially conditioned to be polite and to prioritise men’s feelings above their own #AzizAnsari

The story the woman shared about her date with #AzizAnsari opens up the door to discuss a very complex element of sexual assault. Coercion and consent are two very different things. The thing about coercion is a person can comply in the moment without fully wanting to consent.

Watching Indian male comedians (making Whatsapp grps, calling each other) trying to make sense of what #AzizAnsari did wrong while
1.Not talking to a single woman about how it affect her
2.Saying nothing while Indian women in their industry get bullied by men when they speak up

With Aziz’s response and the ongoing social media debate, this incident shows the complexity of sexual assault.

Therefore, it seems discussions are still needed within society in order for all to understand sexual harassment and consent.