‘Addi Maar’ is a lively and upbeat song from Heer Maan Ja, which is tipped to become a favourite dance number for desi weddings throughout the world.

The producers for the Pakistani romantic film Heer Maan Ja (2019) release the video to ‘Addi Maar’ (heel -beat it), a catchy and peppy dance song, which will be on every desi wedding playlist.

Fans across the globe are already having this song on repeat. The filmmakers team up once again with Sahara UK, following the success of ‘Billo’ from Parchi (2018).

The perfect, colourful and energetic song stars Ali Rehman Khan and Zara Sheikh on screen. Sheikh is making a comeback after two years, exciting her fans.

She demonstrates the Thumka (pelvic thrust) well in the song.  Her hair and clothes are stunningly nostalgic, with expressions which are flirtatious.

In every shot of the song, Khan dazzles and the steals the show with his well-orchestrated dance moves. 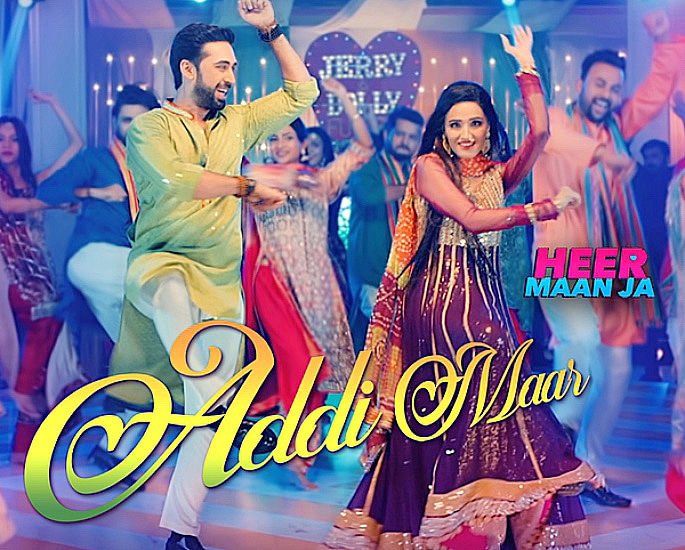 The video, which is almost three minutes reflects a mendhi from a Punjabi wedding itself

The beats to the song will encourage many to put on their wedding shoes and do some boogie-woogie, along with getting in the mood to sing along.

The lyrics of the song are tongue in cheek, taking inspiration from traditional Punjabi beats.

The sounds of the dhol and the melody make this track stand, making it perfect for any wedding function – be it sangeet, mehndi, shaadi, walima or even shendi.

The wonderful steps of the songs by the versatile choreographer Osman Khalid Butt are quite evident in the video.

Despite the song having a normal set, cinematographer Rana Kamran makes the video look good through his filming.

The song is attracting a lot of interest on social media too, particularly on Twitter.

One user going by the name of Mehwysh Awan went did a series of tweets. She began by asking if anyone has heard this song and to comment if people liked it or not.

You cannot hate punjabi music. It has tarka of bhagra and dhool. This is simply amazing. #AddiMaar #HeerMaanJa pic.twitter.com/qGulwAw2Zu

She also replied to her own tweet saying that one cannot hate Punjabi music, as well as the song having all the ingredients of Bhangra and the drum.

She went onto compliment the jewellery worn by Zara Sheikh, along with captioning it:

“She has made a come back with this song. Oh boi”

Some shots from the song #AddiMaar. If you guys haven't checked out the song, please check this thread for the song link. #HeerMaanJa pic.twitter.com/lPqg9ThudF

Finally, she shared a collage from the video showing Khan in action with his different steps and expressions.

This is a song where one can pump up the volume and celebrate in style.

The song has a great mix of dance, music and romance, giving it every opportunity to become a super hit or blockbuster. 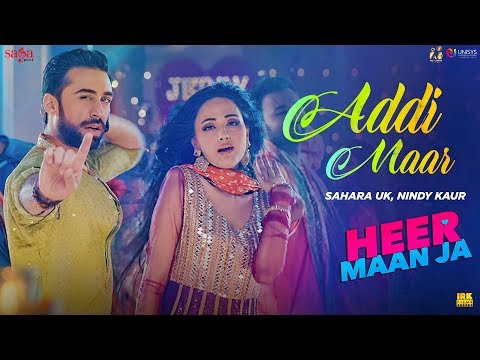 Azar Zafri is the director of the song and film. IRK Films and Arif Lakhani Film are the producers of the film in conjunction with Geo Films and Distribution Club.

This is the fourth venture between IRK Films and Arif Lakhani Films. Imran Raza Kazmi is the founder of IRK Films.

The film will come out in August 2019 during the Eid festivities. The release timing of ‘Addi Maar’ coincides with the wedding season in the west, with it being in full swing during the winter months in the subcontinent.

The song released under Unisys Music has the potential to one of the most popular tracks of 2019.

Faisal has creative experience in the fusion of media and communication and research which increase awareness of global issues in post-conflict, emerging and democratic societies. His life motto is: "persevere, for success is near..."
Badshah beats BTS & Taylor Swift for Most YouTube Views in 24 Hours
10 Top Nazia Hassan Songs both Youthful & Timeless