When it comes to food in Pakistan, different areas become known for creating specific dishes. We look at some of Pakistan’s best regional foods.

the fat renders down until it becomes crisp while the meat remains moist.

When it comes to the most popular dishes in Pakistan, regional foods are some of the most well-loved and are a staple in the area they are made in.

For years, people from different cultures and faiths have lived together in the sub-continent.

They came up with some great cuisine during those times by mixing their regional spices and cooking techniques which are typically seen across South Asia.

In the different regions of Pakistan, there are some recipes that are as old as 300 years old.

Generally, Pakistani food provides great diversity whether it is a five-course meal or a brunch on a lazy Sunday.

This variety comes from a plethora of herbs and spices which are used to create unique flavours for every meal.

We take a look at some of the best regional foods in Pakistan and are known for their delicious tastes. 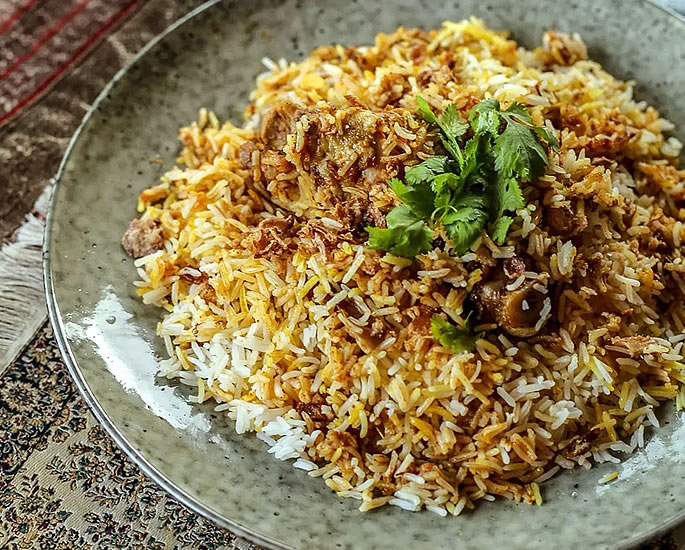 Even though biryani is a North Indian dish, Sindhi biryani is very popular in the province and originated there.

It uses similar ingredients to the other versions but it is considered to be one of the most flavourful versions as a wide variety of spices are used.

The elegant dish is a popular choice to make for special occasions.

The intense flavours and the layers of rice and meat make it very popular in Sindh and other areas of Pakistan.

Saffron, green chillies, coriander, mint and onions enhance the flavourful dish. It is no surprise that this regional food is enjoyed all over the country. 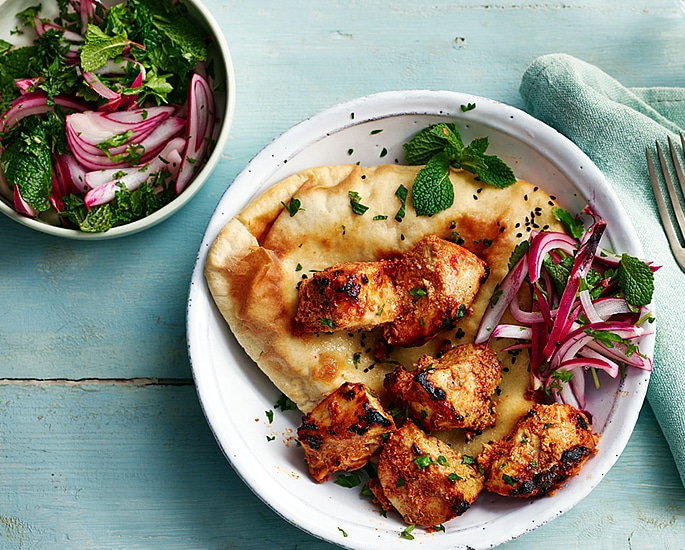 Chicken tikka is a staple of Punjabi cuisine and is traditionally made with small pieces of boneless chicken.

A range of spices is used to create numerous tastes and it all comes together when mixed with yoghurt. The marinade is then generously spread onto the chicken before each piece is skewered and cooked on a brazier called angeethi.

It is the same as tandoori chicken, however, chicken tikka is made using boneless chicken.

When cooked, the result is moist pieces of chicken with a  smoky flavour and hints of the different spices used.

The popular dish is enjoyed all over Pakistan, but it is in Punjab where it is renowned. 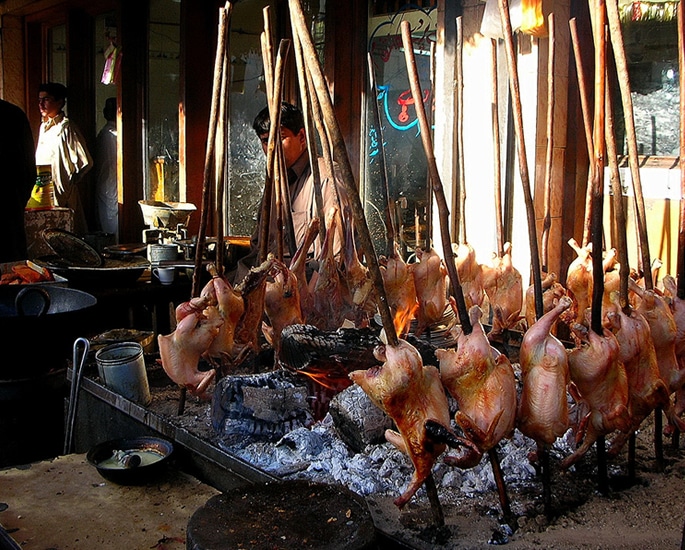 This dish is very popular in the region and originated there. It is made using a whole lamb or chicken in skewers while keeping the meat and fat intact.

The meat is only marinated in salt but it is sometimes covered in green papaya paste, stuffed with rice, then cooked over hot coals.

As it cooks, the fat renders down until it becomes crisp while the meat remains moist. Sajji is considered done when it is at the ‘rare’ stage.

There is a unique flavour when eating it and it is usually served with Kaak, a bread native to the region which is rolled over a stone and cooked in a tandoor.

It may be available in all the regions of Pakistan but in Balochistan, it is a favourite among the locals. 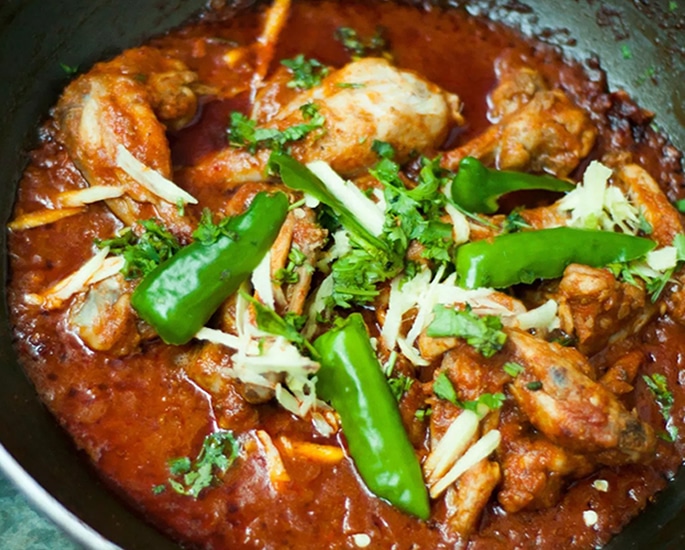 This is another enjoyable dish in Punjabi cuisine but it is very popular in Lahore.

While it may look like regular chicken curry, it is notable for its spicy taste as well as a rich sauce that the chicken is in.

The dish is prepared in a karahi (wok) which is where it gets its name from. Chicken is the most popular meat used but it can be substituted for lamb which is when it becomes gosht karahi.

Even though the chicken is flavourful, it is the sauce which contains the intense spice. Combining the two together is one of the reasons why it is popular in Lahore.

Chicken karahi is served with naan or roti along with raita. 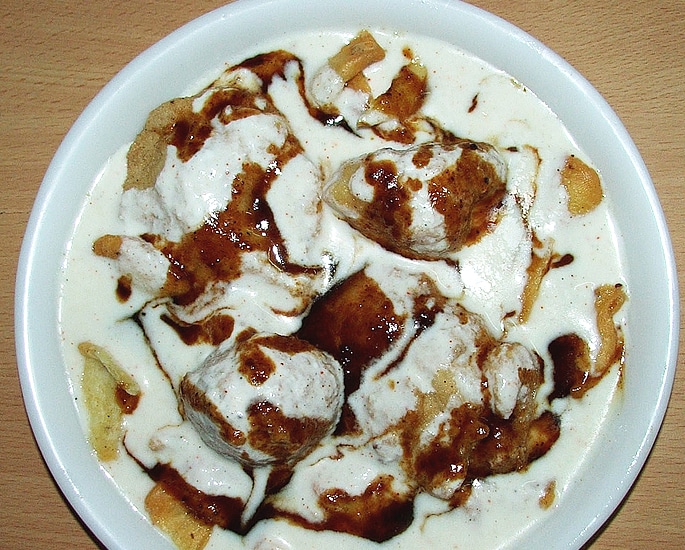 Chaat is a very unique dish of the sub-continent and is one of the best foods to have in Karachi.

It is loved by people of all ages and is usually eaten as a snack because it is light and is widely available at food vendors.

There are many different versions of chaat but all of them are based on fried dough mixed with other ingredients.

The original chaat is made using potato, crispy fried bread, chickpeas and spices to give a tangy and slightly salty flavour.

Chaat can also include chopped onions and sev. The wide variety and the fact that you can get it easily make chaat one of the best regional foods in Pakistan. 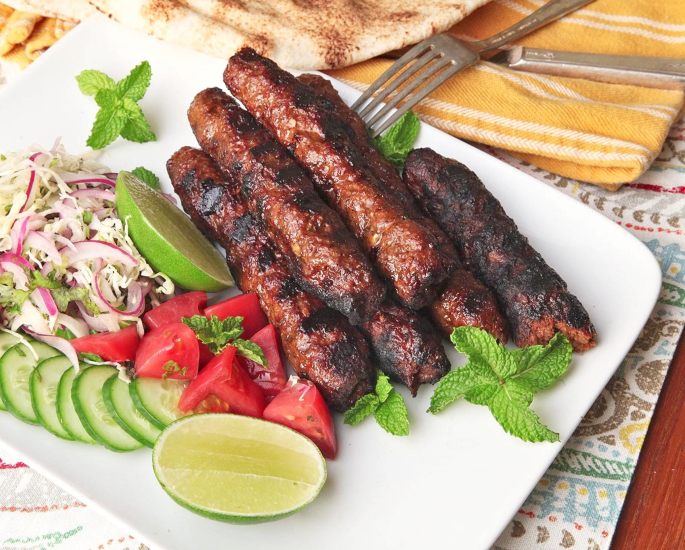 Different types of kebab are enjoyed all over the world, let alone Pakistan. However, this grilled meat is a well-known dish in the Punjab region of Pakistan.

Kebabs follow the same principal as chicken or lamb is marinated using an array of spices before being cooked on a grill or in a tandoor.

There is a wide variety of kebabs made in Pakistan which include seekh kebab, chapli kebab, reshmi kebab among others.

Some of them use minced meat which has been marinated. They are shaped on metal skewers and grilled.

It is one of the most appetising dishes and when eaten with naan, it results in a delicious meal. 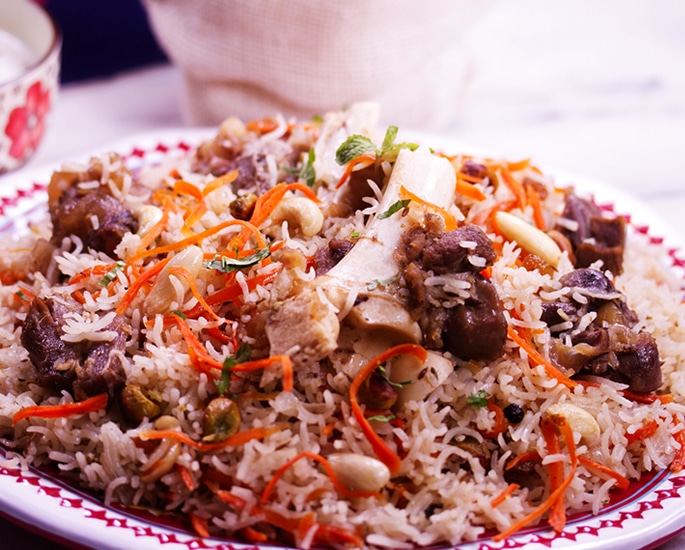 This dish originated in Afghanistan but it was made popular in Pakistan, specifically in Peshawar.

It looks similar to a biryani as a result of the meat and rice layers but it uses a different cooking process. It consists of steamed rice mixed with raisins, carrots and lamb.

The meat is cooked in a large pot along with onions and a broth is formed. The broth is then used to cook the rice which is why the rice turns brown.

Both sets of ingredients are combined and baked in the oven. The dish is typically garnished with fried sliced carrots, raisins and chopped nuts.

When the meat and rice are combined, the rice usually covers the meat completely and acts as an insulator which makes the meat extremely tender.

It may be Afghanistan’s national dish but it is a well-loved meal choice among the people of Peshawar. 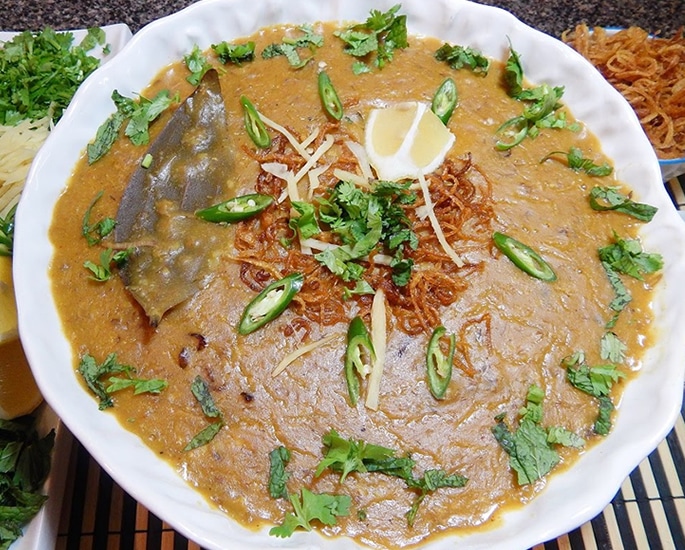 Haleem is one of the oldest dishes as it is said that the first recipes date back to the 10th century. It has since become very popular in both India and Pakistan.

The city of Hyderabad in Sindh have a particular fondness for this dish which is a stew. However, it is a time-consuming dish to prepare.

Once everything is combined, it is then slow cooked for seven to eight hours. The flavours are blended together when making haleem and it becomes paste-like.

It is usually served alongside naan and fried onions for added texture. 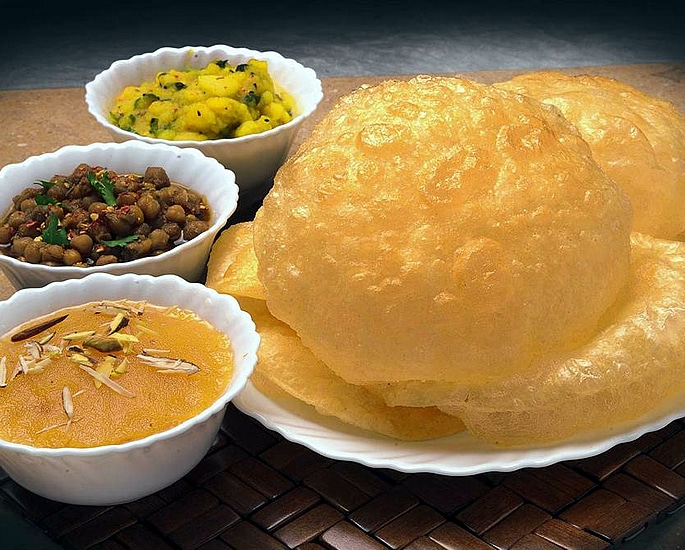 In Lahore, halwa puri is a favourite meal to have for breakfast. It is actually famous in the city as a breakfast dish.

Puri is a bread made out of maida (All-purpose flour) which is then deep fried in oil. It is served alongside halwa which is a sweet confection made of semolina.

The two elements create a sweet and savoury balance of flavours and its lightness makes it ideal for breakfast.

It is usually served with chickpeas and potatoes for added flavour and texture.

This popular dish is not only enjoyed in Lahore, but also in other Pakistani regions as well as parts of India. The unique combination of flavours is what keeps people coming back for more. 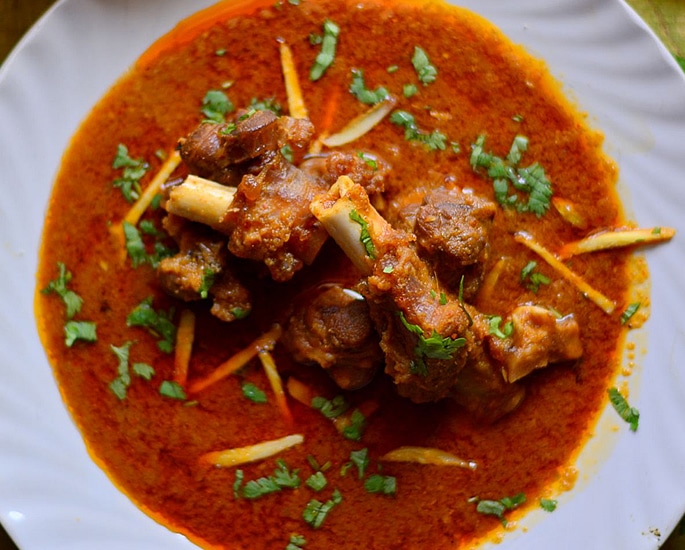 Nihari originated during the Mughal Era and consists of slow-cooked meat, typically shank meat of beef or mutton along with bone-marrow.

It is the bone marrow which gives it flavour as the sauce takes on a unique flavour and becomes richer.

The meat is marinated overnight so that the spices are absorbed fully. It is then slow-cooked for hours until it looks like a meat broth. This cooking process helps the meat fully absorb the spices.

People from northern India brought the dish to Karachi following Partition. It quickly became a success and soon it’s popularity grew all over Pakistan.

It became known as the national dish of Pakistan and it is easy to see why. The tender meat in a rich sauce creates a wonderful combination. 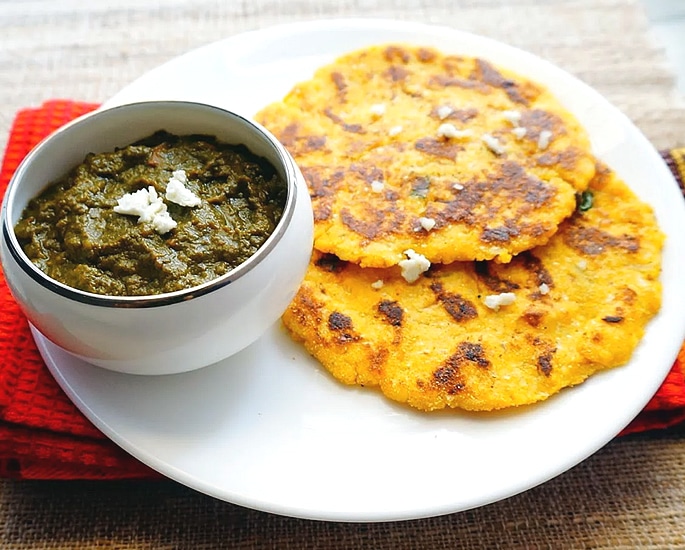 Sarson da saag is a popular dish eaten in Punjab, particularly during the winter months. It is comprised of a healthy mix of mustard leaves, spinach, goosefoots (a herbaceous flowering plant), fenugreek and various spices.

The ingredients are then blended. It may take some time to make, it is a mouthwatering dish.

Faisal Iqbal, a citizen of Punjab, said: “November, December and January are the months when the saag is available in plenty.

“And nothing can beat the taste and nutrition of seasonal greens.”

Just before it is eaten, people heat up a little butter and pour it in. It is usually served with makkai ki roti (flatbread using maize flour).

However, it can be difficult to make so some buy it ready-made or have it with normal roti. 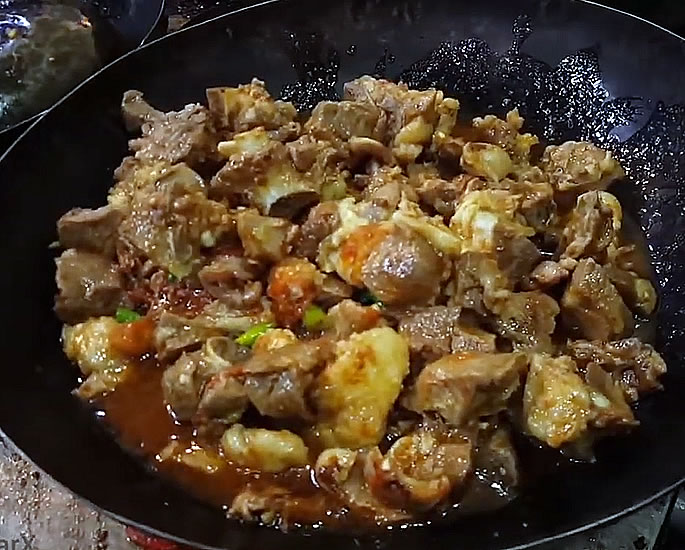 Dum pukht is another traditional dish is made using lamb and is a favourite in Peshawar.

Other vegetables like potatoes and tomatoes are added to the meat and they cook together in a sealed pan. It is slow-cooked and it allows the ingredients to flavour one another.

In addition, everything becomes tender and the lamb cooks in its natural juices.

The result is a hearty combination of meat and vegetables which is flavoured with the meat juices.

It is one which doesn’t need intense spices as the idea is to keep a natural flavour, so season with salt and pepper and enjoy with naan or rice.

These delicious dishes are extremely popular throughout the regions of Pakistan and it is clear to see why. As all present a unique set of flavours and use various cooking methods, but they all result in great-tasting food.

While some of the dishes may not originate in the specific regions, they were introduced there and quickly became popular. Therefore, they became a staple in the region.

Many of the dishes have gone on to be enjoyed in numerous regions in Pakistan and even different countries.

Rabi is an Engineering graduate with a passion for creative writing. She loves to pen down her thoughts on self-awareness, fashion and media news. Her motto is “Be the reason someone smiles today”.
Shark Meat secretly Sold as ‘Fish’ Dishes in Karachi
5 Indian Potato Recipes Easy to Make at Home