It has been revealed that shark meat is being sold as fish dishes at fish stalls across Karachi, Pakistan, without the customers knowing.

people are wary when it comes to its consumption.

An investigation has found that fish stalls in Karachi have been secretly selling shark meat as fish dishes to unsuspecting customers.

The plethora of fish stalls in the city has a wonderful aroma. Fried finger fish, in particular, is a popular delicacy.

While there are hundreds of customers treating themselves to this dish, little do they know that the meat comes from sharks.

The selling of shark meat is also present in catering services. It is served at events like weddings in the form of finger fish or fish kebabs without consumers knowing.

While it is not forbidden to consume shark meat, it is not a healthy option.

A 2015 study published in Marine Pollution Bulletin found that sharks produce high mercury levels due to their predatory nature.

Regular consumption can have negative health effects on consumers.

Unprocessed shark meat can go bad quickly and comes with an ammonia-like odour because of the high urea content. Therefore, sellers add many spices and chemicals to reduce the smell.

Shark meat is not typically popular in Pakistan which is why people are wary when it comes to its consumption.

Many regulars at finger fish stalls have said that they would not eat shark meat.

There are a number of reasons why sellers are using shark meat to make popular dishes. 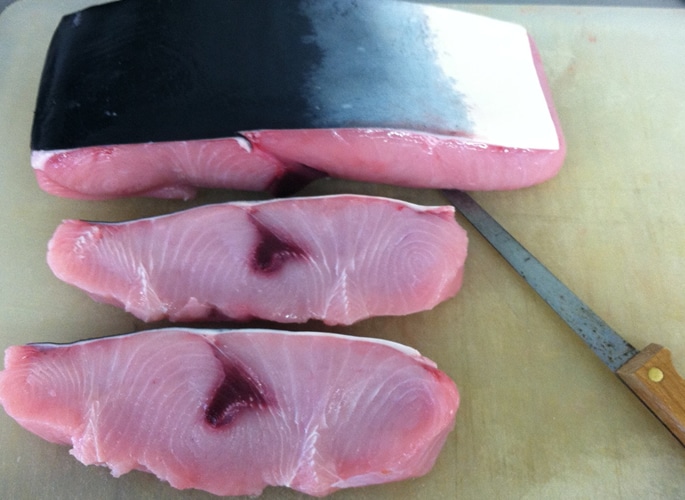 Because there is no demand, shark meat is very cheap. However, due to it being shark meat, sellers do not reveal what it is and use local names like ‘Mangra’ to refer to it.

Sellers even resort to lying and giving false names if there are more curious customers. They do this so that they continue making sales.

Director of the Fisherman Cooperative Society, Dr Muhammad Yousuf, confirmed that it is shark meat being sold in Karachi under the pretext of finger fish.

He told The Express Tribune:

“People think that shark meat is forbidden, therefore, they do not want to consume it.”

“As a result, sellers and catering companies lie to consumers and fish enthusiasts and tell them that they are being fed a ‘good breed’ of fish.”

Based on Dr Yousef’s comment, the Hanafi school of thought does say that shark meat is permissible. However, there will be those who do not agree with Dr Yousef and firmly believe it is forbidden to eat.

Either way, it does not warrant for shark meat to be sold without full disclosure in this manner.

Dr Rukhsana Asghar Chaudhry stated that shark meat can be dangerous for those suffering from high blood pressure or heart-related issues.

She said: “Sharks do not pass urine.

“This is why their meat has a bad odour and has a very high ammonia content.”

Dr Chaudhry said that it is unethical of vendors to sell the meat to unaware customers.

“First, shark meat must be washed and treated properly.

“Second, people must be told the truth about what they are eating and if they are okay with shark meat, then they can consume it by all means.”

Sharks typically measure between 10 and 25 feet long and weigh from a few kilograms up to 500 kg.

When the meat reaches Karachi, they are auctioned. From then, they remove the sharks’ identity.

Their bones and skin are separated from their flesh. The freshly caught “boneless fish” is bought for as little as Rs. 400 (£2.20) per kg.

Dr Yousuf said: “Every day, more than 10,000 kg of shark meat or mangra is cut up to be supplied throughout the city.

“Since the meat is boneless, it is readily purchased by vendors who then make finger fish, fish katakat and fish kebab out of the meat.”

An unnamed seafood restaurant owner said that people do not care about the type of fish that they eat, only the taste.

He said: “It is the taste that matters, which has been attracting hundreds of customers to our stalls every day.

“No one even bothers to ask about the type of fish we use.”

While fish stalls are very popular and successful, this revelation highlights unethical practices.

Sellers do not tell customers what fish they are eating and are even lying to them in order to make a sale.

Not only that but the meat can have an impact on health as a result of its high ammonia content.

While people continue to buy these ‘fish’ dishes and some have said that they only care about flavour, they have a right to know what type of fish they are eating.

Dhiren is a journalism graduate with a passion for gaming, watching films and sports. He also enjoys cooking from time to time. His motto is to “Live life one day at a time.”
5 Refreshing Indian Drinks to Try
12 Best Regional Foods from Pakistan