10 PlayStation 4 Exclusive Games you Must Play

There have been some amazing games released which are exclusive to the PlayStation 4. Here are 10 great releases that you need to play.

It all depends on the choices you make.

Since the PlayStation 4 released in 2013, gamers have been able to enjoy some fantastic games which are exclusive to the console.

Sony and Microsoft have gone head to head with their flagship consoles and both have their own set of qualities.

While it could be said that the Xbox One is better for online gaming and its social aspect, the PS4 is arguably better when it comes to immersive stories.

Sony is also better in releasing games exclusive for their consoles. The PS4 still continues to release huge titles including Spider-Man.

Some of their most successful games are exclusive, which means that Xbox owners will not have a chance to play them.

Even though the rumours of the PS5’s eventual release have started to circulate, exclusive games continue to deliver.

There have been several Ps4 exclusives, some more enjoyable than others, which have been considered as some of the best gaming releases.

We have 10 exclusive games that you must play. However, this does not include games such as The Last of Us which was originally released on PS3 and then remastered for the latest console.

This also means games originally released on the PS4 cannot have a later release on a different console.

Here are some of the most enjoyable games that are exclusive to the PS4. 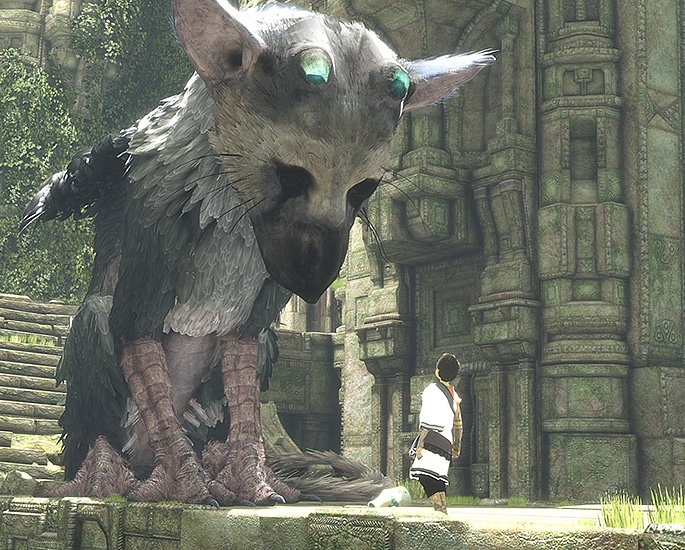 It was initially announced in 2009 for a 2011 release for the PS3, however, several delays prevented that from happening.

Despite that, The Last Guardian‘s announcement attracted attention due to the successes of the previous games from Team Ico.

A surprise reveal of the game at E3 2015 showed it looked quite different from the early first impressions but it looked promising for a new generation of console.

Video game director Fumito Ueda is known for stirring the player’s emotions and sense of wonderment. The Last Guardian does just that.

You play as a young boy stranded among ancient ruins. You befriend a giant bird/dog hybrid called Trico and the two of you make your way towards freedom.

The AI makes Trico feel like a living creature you need to work with in order to solve a variety of third-person puzzles.

Over the story, a bond is evident between player and animal which is similar to the companionship of a real-world pet.

While some of the mechanics are frustrating, it is a beautiful story of a boy and his bird/dog which you should play if you own a PlayStation 4. 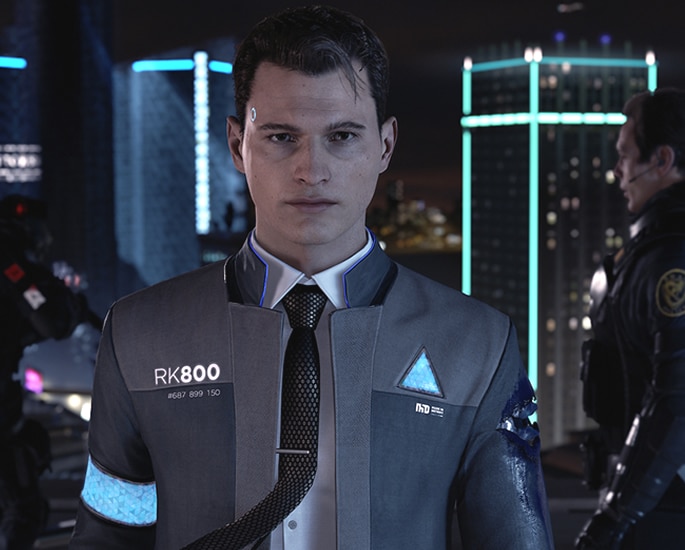 Detroit: Become Human is one of the newest releases when it comes to exclusive games and it is all about the storytelling.

The choice-based gameplay and futuristic setting made it much-anticipated among gamers.

It revolves around three Androids, all eventually break their programming to become ‘free’ in the year 2038. You play as the three androids during the story.

Apart from the detailed graphics, you have interesting choices to make which will shape the story.

If one of the characters dies, there is no game over screen, the story continues without the character and the plot will change. It all depends on the choices you make.

The heavy reliance on dialogue is what makes the game great as players will become invested in each Android and their struggles.

It will keep you hooked and you will genuinely be thinking over some of the game’s tougher moral choices. 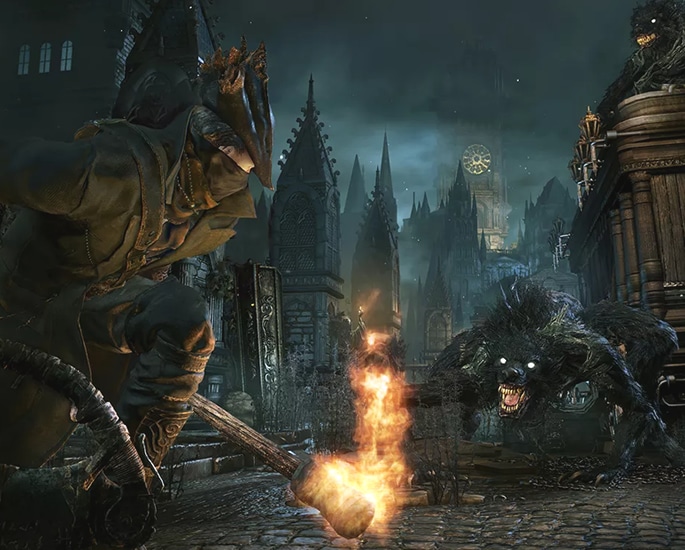 Bloodborne is one which is considered to be a masterpiece though it is a gruelling one.

Set in the gothic city of Yharnam, it is yours to explore but be wary as you will not be alone. Almost everything will kill you if you are not careful.

It is considered to be one of the most difficult games out there and that is evident with the insane difficulty spikes and unconventional combat.

This elegant third-person action role-playing game opts for a quicker pace of play.

Although your character will constantly die as a result, it is hard to stop playing because when you eventually defeat an enemy, there will be a sense of accomplishment.

However, you must always be wary about what’s lurking around the corner as there is a range of horrific monsters.

Every ounce of progress is an achievement and that is why it is a PlayStation 4 exclusive that you must play, no matter how difficult it may be. 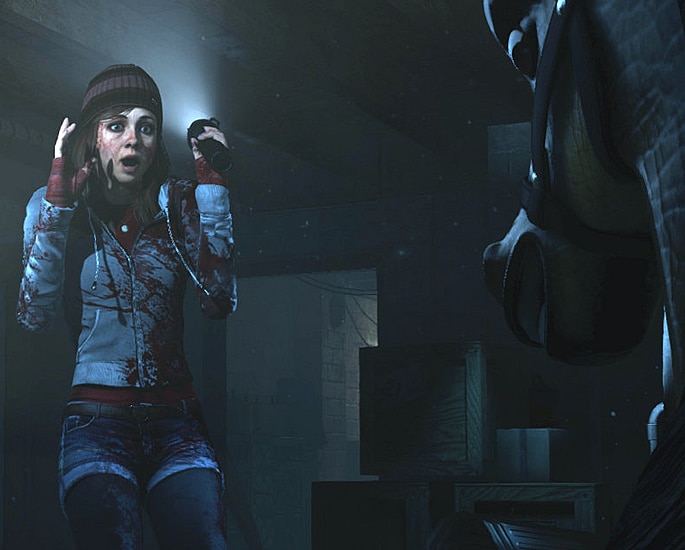 Until Dawn is one of the best horror games as it manages to bring together elements from horror films without ruining it.

The engaging storyline follows a group of teenagers who go on a cabin trip which quickly turns into a living nightmare.

It is a choice-based psychological horror in which even the smallest things can change the course of the story and who survives.

Players alternate between eight characters and critical decisions made results in hundreds of different scenarios.

Featuring several well-known American actors, including Oscar-winning actor Rami Malek, the game presents a lot of opportunities to replay it.

You will try to prevent any deaths or maybe you want to see an annoying character meet their gruesome end, it is up to you.

The constant jump scares throughout will keep you alert and wanting to play more. 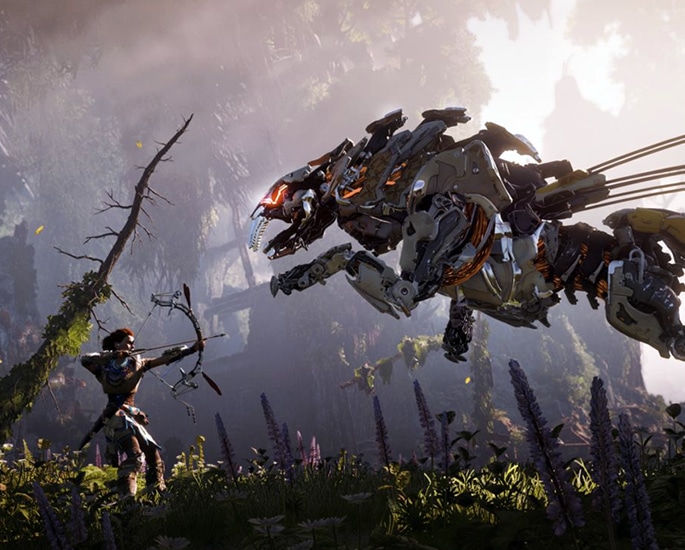 While this has a futuristic setting like many other games, Horizon Zero Dawn confidently stood on its own and quickly became a PS4 exclusive which must be played.

You play as Aloy, a huntress living in a world filled with mechanical beasts. You must survive against these creatures and there is an array of tactical options when doing that.

It is an original blend of hunting, gathering and stealth set in a lush, overgrown environment.

The story is compelling as players get to see Aloy’s character develop throughout as she becomes more confident and her personality grows.

She is strong-willed throughout and the action sequences were praised by critics.

It is a well-suited role-playing game which has lots of unique gaming aspects. It shows the capabilities of PlayStation and what a great game is. 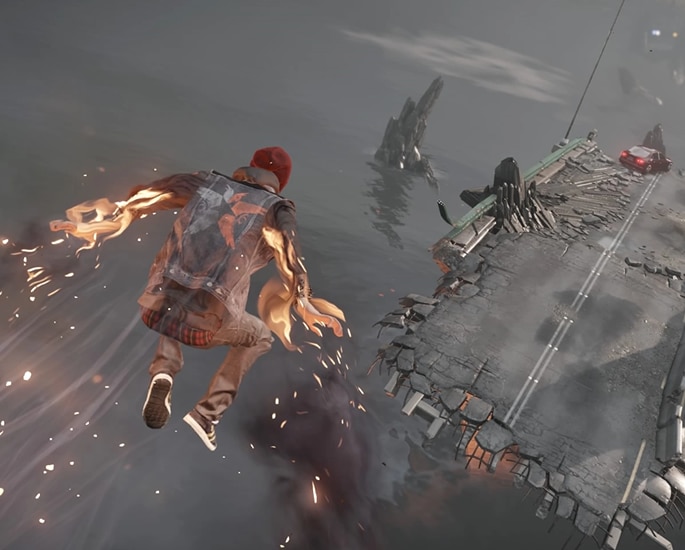 inFamous: Second Son is one of the original PS4 launch games and its gameplay picks up where its predecessors left off.

You play as Delsin Rowe who has superpower abilities which can be used in combat and when travelling across a fictionalised Seattle, USA.

Over the course of the story, Delsin acquires new powers and becomes either good or evil as choices made by the player influence his morality.

The open-world game became even more quality when technical tweaks were made for the PS4 Pro.

The vast world is one which must be explored and the game is still enjoyed. Visually, the superhero story still looks great.

It’s a story of family and brotherhood and it is still a favourite among PS4 gamers. 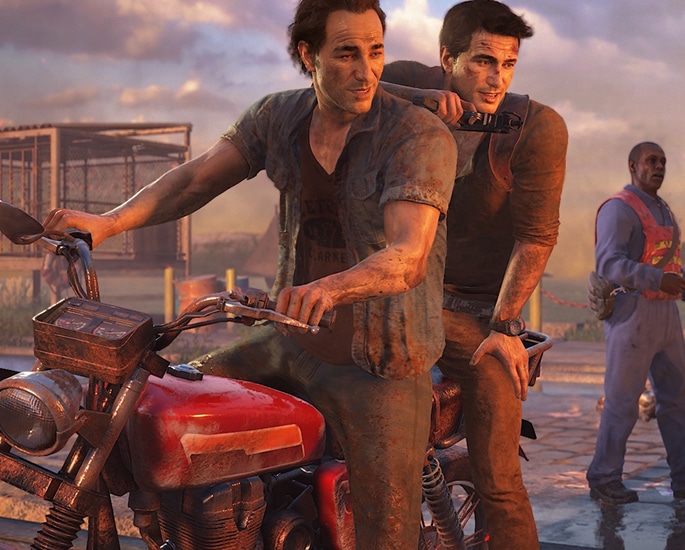 The Uncharted franchise has been a staple when it comes to PlayStation exclusives and the fourth instalment is arguably the best.

They have been known for immersive storytelling and strong characters, but Uncharted 4 goes up a level. Players have a range of feelings when it comes to the characters.

Each character has been brought to life with fantastic motion-captured performances.

Nathan Drake reunites with his brother to go hunt for one last treasure. As usual, there are unexpected twists as the story progresses.

The cinematic scenes combined with visuals will remind you how good gaming can be and it is a fitting end to Nathan’s story. 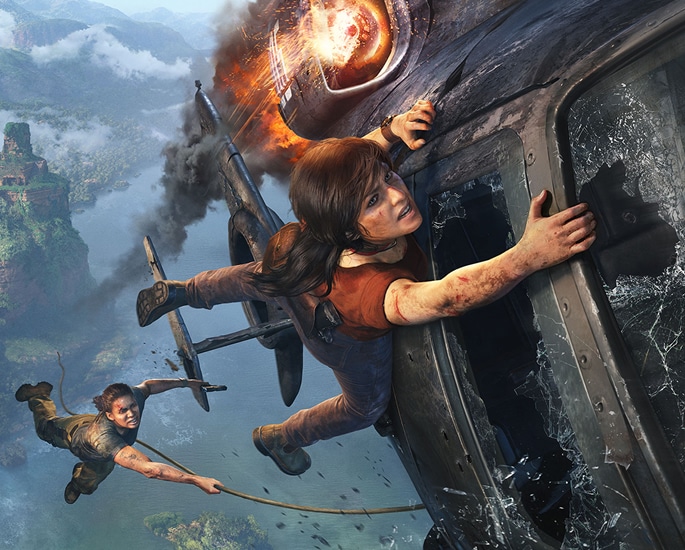 Although Nathan Drake’s treasure hunting story came to an end, Uncharted: The Lost Legacy brings about a new one.

It may be a spin-off, but it still remains a full-length game with excellent cinematics.

You take control of returning characters Chloe Frazer and Nadine Ross as they go treasure hunting in India in the midst of a civil war.

Like the previous games, there are plenty of puzzles to keep you entertained or frustrated.

As with other Uncharted games, the scenery is spectacular and full of life. The change in characters was a gamble but it was one which paid off as the game was a success.

This is one game you must play, but it may also see future releases featuring other Uncharted characters. 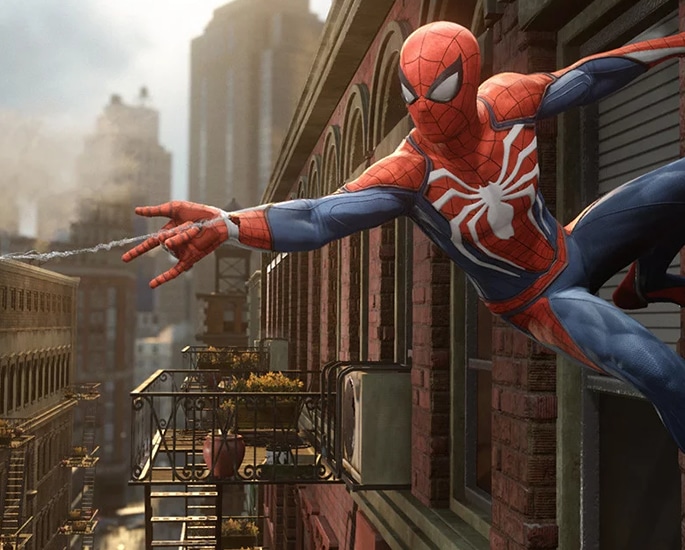 This is one for all superhero fans and this one of the best in the genre over the last few years.

The graphics look stunning as each building in New York City has been captured with immense detail.

Spider-Man is filled with things to do and swinging through the city is as fluid and as crisp as can be. That transfers to the combat which lives up to the combat from the Batman: Arkham series.

The story mixes humour and action to create a gripping narrative that is bound to keep you engaged and surprised at any twists.

By playing the game, you will unlock new costumes which you may recognise from past comics or films.

It captures the spirit both the old and new versions of Spider-Man in other media.

The vast amount you can do will keep you playing and even swinging around is entertaining. 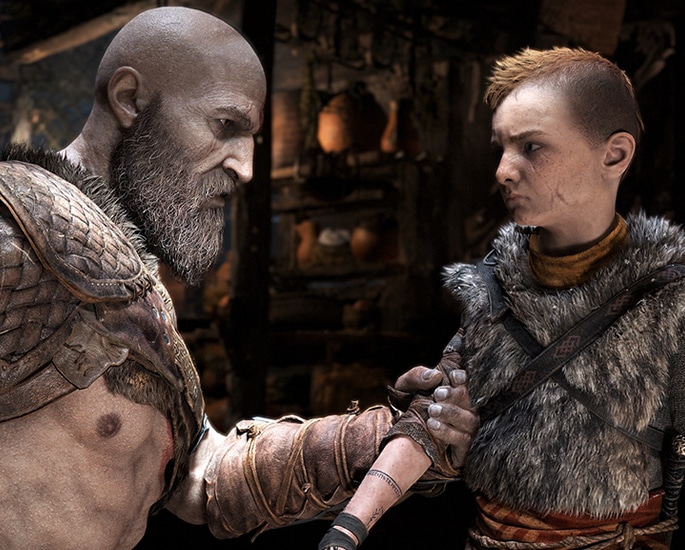 PlayStation fans are aware of the God of War franchise and its protagonist Kratos. When the rebooted franchise made its way onto the PS4, gamers saw a change for the better.

Now among Norse mythology and with a son, this new story about Kratos is possibly the greatest PS4 exclusive.

Players get to see a new, more human side to Kratos, even though he is a demigod. He is not the one-dimensional murder-machine anymore.

The well-written story has a fluid pace and takes place in one cinematic shot, meaning the camera never cuts.

Combat remains just as fluid from the previous games, but against well-constructed enemies in various environments.

It was well-received by critics and won several prestigious awards including a British Academy Games Award for Best Game.

It is proven to be a great game and is one for those who want a masterpiece of a story.

These are just 10 games out of many others which are exclusive to the PS4, however, these are ones which you should play if you want an amazing gaming experience.

Even though the release of the PS5 is inevitable, there are some awesome games for the current console.

There are still new games being announced and released such as Days Gone and The Last of Us part 2. This means that fantastic games from all genres continue to be created for the console to entice gamers.

Dhiren is a journalism graduate with a passion for gaming, watching films and sports. He also enjoys cooking from time to time. His motto is to “Live life one day at a time.”
Sham Idrees and Froggy excite Fans with Pakistan Visit
What to Expect from Mortal Kombat 11