Days Gone – Unlike any other Zombie Game

As one of the most anticipated games of 2019, Days Gone is the survival game unlike any other zombie adventure. We look at what it brings to the table.

It also prioritises the character of Deacon and how the world makes him feel.

Zombie Game Days Gone is one of the most anticipated video games of 2019. However, it has not been smooth sailing.

It was scheduled to be released on February 22, 2019, but it was delayed to allow the development team to make adjustments.

Days Gone is now set for an April 26, 2019 release and it promises to be a unique zombie experience.

In recent years, the post-apocalyptic setting has enjoyed success, namely The Last of Us, but it has become somewhat oversaturated.

But this release offers features which have not been seen before in survival horror games. This makes it different from other games in the sub-genre.

We preview the features within the game and what to expect when it releases in April 2019.

How is it Different to other Zombie Games? 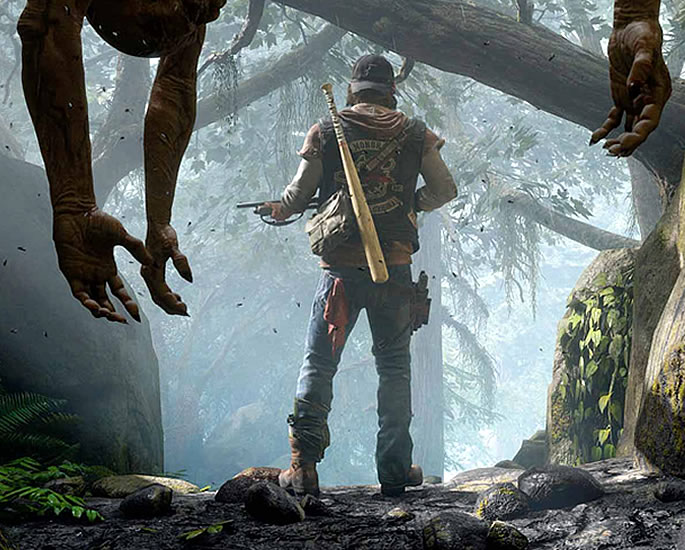 There were not many mainstream zombie games, the main one was the Resident Evil series, however, that changed in 2013 with the DayZ mod.

It was a multiplayer open-world third-person shooter for the 2009 tactical shooter game ARMA 2.

It placed players in the fictional post-Soviet state of Chernarus, where a mysterious plague has infected most of the population, turning them into violent zombies.

Since the DayZ mod released in 2013, there have been a plethora of zombie games released for different consoles.

The most popular format is where you must survive in a post-apocalyptic environment while fending off large waves of zombies.

Zombie games always attract players around the world and Sony has enough of a pedigree to ensure that Days Gone will appeal to gamers.

Days Gone was first announced at E3 2016 with a short 2-minute trailer.

While it didn’t show much information, it did show that we would be playing as an outlaw-turned drifter called Deacon St. John.

At the core, an apocalypse has turned humans into bloodthirsty creatures and you must try to survive.

The concept of the game seems pretty similar to the plethora of other games that are in the market.

However, there are unique aspects which make it an anticipated action-adventure game. For example, the zombies (Freakers) are always evolving.

Infected animals also feature, making your methods of survival even more of a challenge.

It also prioritises the character of Deacon and how the world makes him feel. He pushes to survive despite all the pain he has experienced even before the events of the game.

The focused efforts may seem subtle but they will have a big impact. 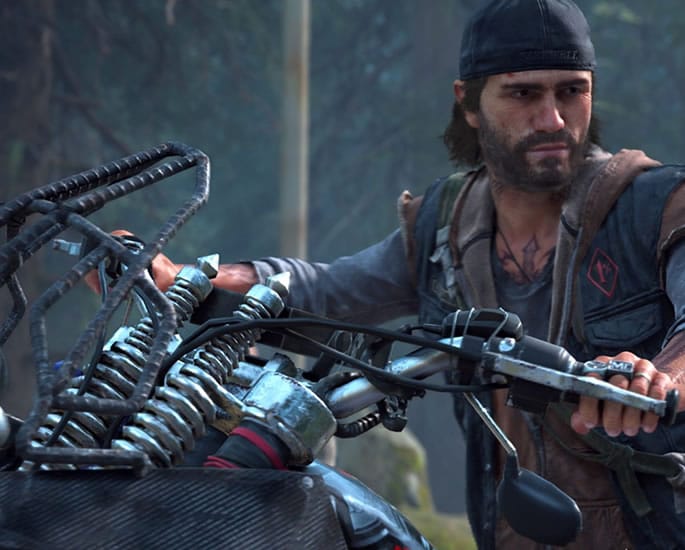 Since 2016, many more trailers have been released and we still do not know what the plot is about.

All we know is that a global pandemic wiped out almost all of humanity. It also turned millions into mindless zombie-like creatures known as ‘freakers’.

From the original trailer, it was clear that the game will have an intense story.

From the beginning, we see Deacon explain everything about how the world turned.

Towards the end of the trailer, we see him mention his wife over an old cinematic that plays of them riding a bike together that means the game may have an emotional touch to it.

It will be intriguing to see how the game’s story moves forward and what is the purpose of everything that the character does.

Is it revenge? Empathy? Or just a desire to survive?

Sony has been secretive with the main plot to give gamers the maximum opportunity to experience all emotions when they play through the game.

A perfect story in zombie games is rare, and it seems like Days Gone will do an excellent job of filling the void in the sub-genre.

A look at the 7-minute gameplay trailer reveals how Days Gone is different from other zombie games.

In previous zombie games, the zombies seem to be the major focus of the game.

All that you need to do is to survive zombie attacks. However, the trailer shows that other humans are an integral part.

While ‘freakers’ are still by far the major threat, humans still pose a threat as some have lost their minds after the apocalypse. 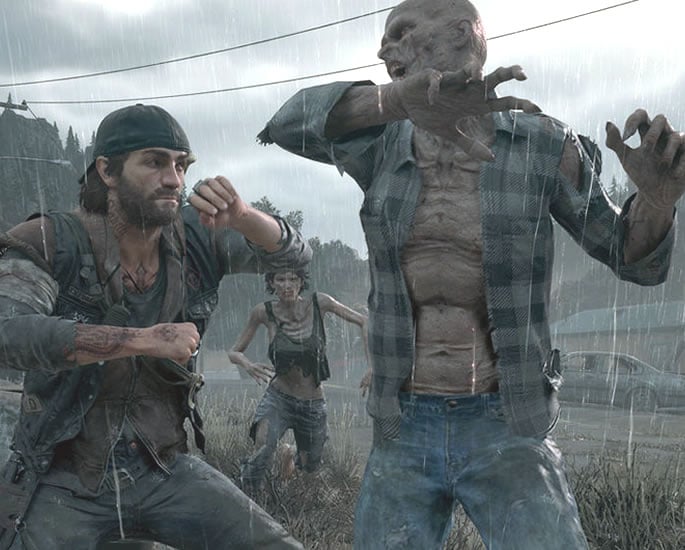 In the trailer, Deacon attempts to sneak past humans who have decided to form a faction and fight each other rather than work together to take out the infected.

It is the perfect way to put the spin on the straight zombie game as the ‘freakers’ seem to be quite useful to you as well.

‘Freakers’ can be used to take out your enemies and clear the path for you to chase your objectives rather than fight.

However, players always have to remain alert as zombies evolve in intelligence and chase you in large numbers.

‘Freakers’ are weak and slow during the day but become fast and aggressive at night. It is a nice addition to enhance the overall gaming experience.

Deacon’s motorbike is his main form of transport and it can be modified to increase its speed, durability or manoeuvrability.

That’s not all as players can complete objectives in multiple ways, such as using long or short-ranged weapons. Gamers can also craft new items to improve combat.

If the gameplay footage is anything to go by, further developments since then have likely increased the quality. 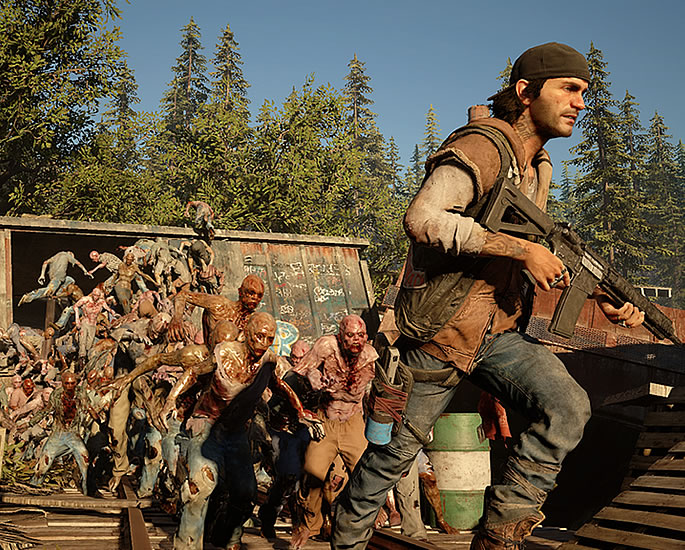 The ‘freakers’ are your main obstacle when progressing through the game, however, they are not like the classic zombies.

According to Sony Bend director and writer John Garvin, they are referred to as the infected as opposed to just zombies.

This will make things more interesting within the game’s environment as it enabled developers to create an open ecosystem.

Garvin said: “Because what that allowed us to do was to create an ecosystem; you’re in an open world, with a day/night cycle, and you’ve got creatures that need to eat, they need to sleep, they need to drink… all of that is built into the daily cycles of the horde.”

While they are weak during the day, they are still dangerous as they move in giant hordes. You may have to deal with dozens of ‘freakers’ at one time.

Garvin added: “You find a horde den you can track what they’ve done during the day.

“You can actually find where they go to feed because we have all these mass graves in the world.”

Compared to other survival horror games, Days Gone is intriguing when it comes to the “infected”.

You may need to run from the ‘freakers’ before using your rifle to eliminate some and then running again as more arrive.

This will make zombie chases more exciting and tense than other games like Dying Light and DayZ.

After a number of delays, Days Gone is confirmed to release on April 26, 2019.

Its release has left some gamers unhappy as it is a PlayStation 4 exclusive, meaning Xbox players will not be able to play it.

Days Gone will be an exhilarating horror survival game as players will get to know Deacon’s story while combatting mobs of the infected.

Fans of the zombie sub-genre have been patiently waiting for the game’s release ever since the announcement at E3 2016.

It will be interesting to see how players utilise the zombies. They can either use them to their advantage or they can kill off as many as they can.

It seems as if we finally might get a zombie game that has a combination of an amazing narrative and zombies which are much more than just zombies.

Only time will tell if the game takes a unique approach and if it is a hit with gamers when it releases in April 2019.

Mohsin is a writer, editor, thinker and fan of incomplete sentences. He is also crazy about playing video games and unveiling changes in technology.
Call of Duty: Black Ops 4 vs Battlefield V
7 Top Cars owned by Indian Millionaire Gautam Singhania