10 Xbox One Exclusive Games you Should Play

Over the years, there have been some great games which are exclusive to the Xbox One. Here are 10 releases you must play.

Since the Xbox One came out in 2013, there have been some fantastic exclusive games.

Their main rival is Sony and their PlayStation 4 and the two have gone head to head. Both have their own set of qualities.

Even though many of the most memorable exclusive titles are on the PS4, there have been an array of enjoyable games specifically for the Xbox One.

There have been some games which are more enjoyable than others but all present different gaming experiences.

With Xbox One entering its twilight years before its successor is revealed, gamers still continue to play the plethora of games on them.

We look at 10 exclusive games in more detail. However, as Xbox is made by Microsoft, many of the games are also available on PC.

They will be looked at, but remastered games will not be considered. Games which were once exclusive but later released on another console will also not be looked at.

Here some Xbox One exclusive games you should play.

After initially being announced for a 2018 release, the game was delayed and instead released in 2019.

While it may not be the best game ever but it does not need to be. The Crackdown franchise is known for being all about having fun.

Crackdown 3 does just that. It allows for a laidback gaming experience for those who want to relax while playing.

When the world’s electricity goes down, your objective is to take down mob bosses and cause destruction.

The destructive environment adds to the fun and makes for some amazing effects. This is due to the computing power of the Xbox One to be freed up.

While there is a range of characters to choose from, one of the most popular choices is Commander Jaxon, who is voiced by American actor Terry Crews.

That alone may be enough for gamers to give Crackdown 3 a playthrough. A bit of light entertainment is exactly what this Xbox One exclusive is. 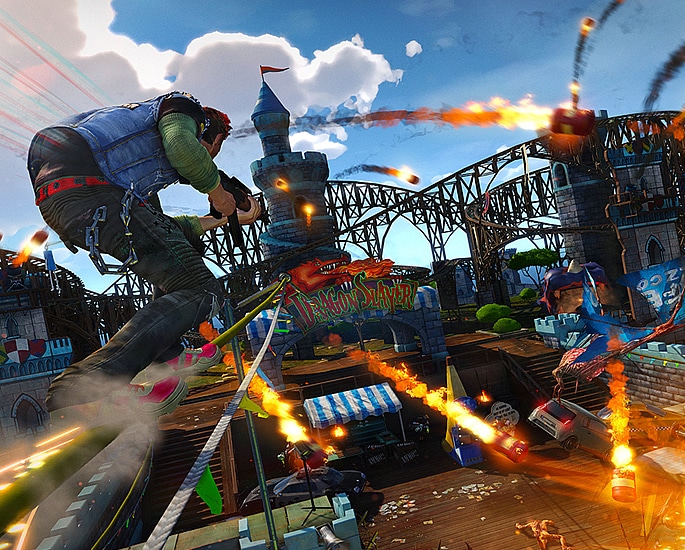 Sunset Overdrive is made by Insomniac Games, who made a name for itself with the Ratchet & Clank series.

The franchise was known for a diverse range of outlandish weapons so the studio took that and mixed it with a colourful metropolis.

There is a sense of punk rock attitude when it comes to this exclusive as it lets you create spectacular over-the-top feats of mass destruction.

Bowling balls, fireworks and explosive teddy bears are just some of the things that can be used to fight off crazed mutants in this open-world shooter.

It is a chaotic game with a generous injection of edgy humour which may not always be funny, but it makes up for it with its vibrancy.

When combined with dozens of customisation options, Sunset Overdrive is one of the more underrated games you should play. 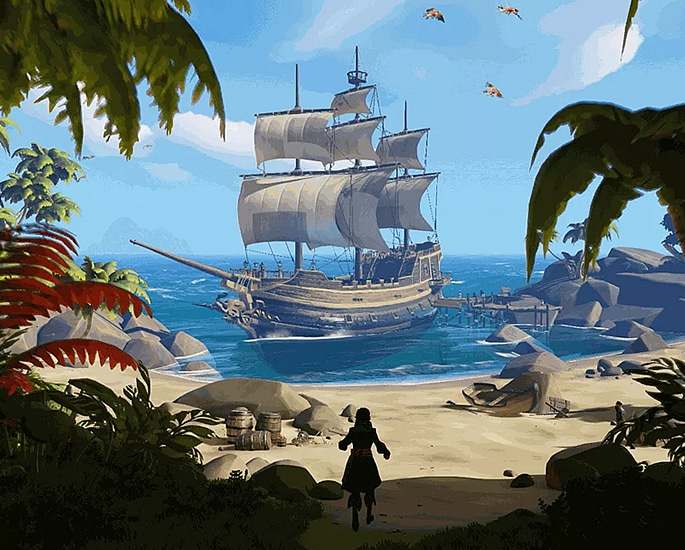 For those who love an online multiplayer, Sea of Thieves is the ideal game for you.

Developers Rare created the pirate adventure which sees players sailing across the seven seas and searching for treasure.

But it is not an easy journey as hordes of skeletons and undead sea captains present challenging obstacles.

As it is a multiplayer game, it is also about having a laugh with your friends.

They are members of your crew and sailing with them in Sea of Thieves creates a lot of memorable moments.

While it is one of the best Xbox One exclusives, it may need a little more content if it is going to stay popular.

It still remains a great game that PS4 users miss out on.

Titanfall was one of the most anticipated Xbox One exclusives leading up to its release. When it finally came out, it was all gamers were playing.

Despite the lack of a campaign, the first-person shooter presented a wild thrill ride that was highly enjoyable.

It may have been a unique game at the time, but players did not stick around for whatever reason.

When the player base decreased, many gamers claimed it had “died”. However, that is not true as Titanfall has maintained a dedicated following over the years.

Its sequel was much more acclaimed but generated fewer sales.

While not many people play it as often, Titanfall remains one of the most hyped exclusive games and is one you should definitely play if you haven’t before.

Quantum Break is one game which goes under the radar compared to other released but it is still an enjoyable story to delve into.

Featuring a star-studded cast, including Shawn Ashmore from the X-Men franchise as the lead, there are TV tie-in elements.

The protagonist Jack Joyce finds out he has time-manipulating abilities. He must use them to fend off armed enemies and prevent the end of time.

The combination of third-person shooting and reversing time is one of the best features of the game. Good acting performances and time mechanics also offers a solid experience.

Moments, like trapping enemies in a prism-like stasis bubble and peppering them with soon-to-be-unfrozen bullets, are what make the story unique to other games.

It is a game for those who want to get stuck into the action around them.

While it did receive mixed results, Quantum Break is a cinematic gaming experience to try out.

Ori and the Blind Forest 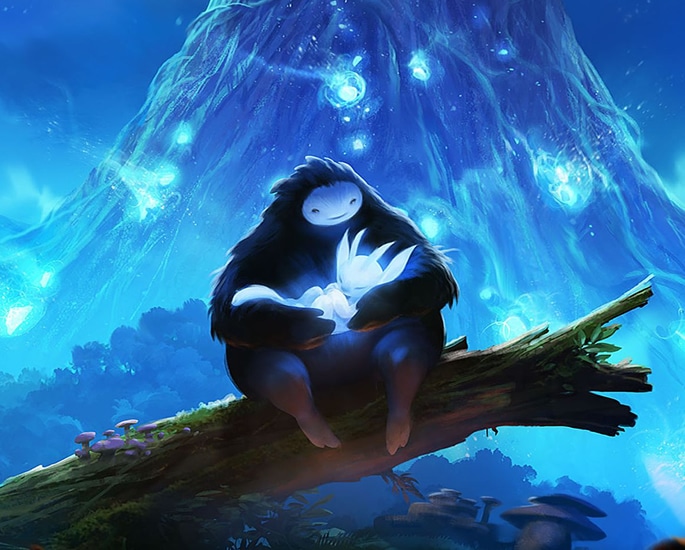 This 2D platform game showcases the true artistry of what a game can be. Ori and the Blind Forest is effortlessly charming and lovingly produced.

You play as the fluffy Ori, who is accompanied by a watchful spirit named Sein.

Together, you explore a lush but treacherous forest which has been brought to life with hand-drawn art and silky smooth animation.

To progress, players have to move between platforms and solve platforms.

Players can save their progress at will thanks to a system called ‘soul links’. They can also upgrade Ori’s skills as a result of an upgrade system.

The dynamic between Ori and Sein is one of the best parts of the game and is the centre point for a minimalist, yet captivating narrative.

It is a game which must be played if you like a challenge and if you enjoy a stunning environment. Go into the game blind for the best experience.

The Gears of War franchise is an Xbox staple and the fourth game is one for those who are a fan of the shooter series.

Characters from previous games return in the war for survival as they take cover and shoot through hordes of enemies using an assortment of weapons.

Even though the multiplayer element is more popular, nothing should be taken away from the enjoyable campaign mode.

It delivers one thrilling third-person shootout after the next, all at a frenetic pace.

The improved graphics and minor gameplay tweaks only enhance the game for a better playthrough.

Online multiplayer in Gears of War 4 is a great way to go all out with over-the-top action but with your friends.

The revamped Horde mode brings an appreciated tower defence element and is a great way to unwind with your mates. 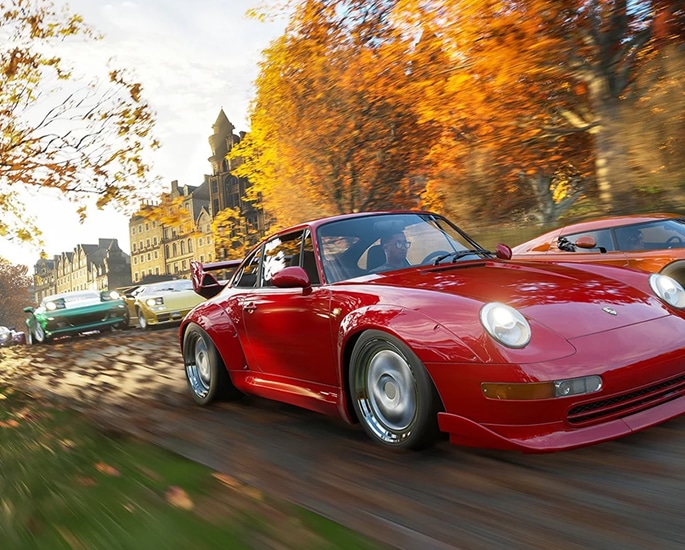 The Forza Horizon spin-off is all about racing on long, open stretches of road and the fourth instalment is a pick of the bunch.

While each car has been intricately recreated in digital form in immense detail, the star is the location.

Each landscape is incredibly detailed to give you a sense of realism. Even the tiny details add to the authenticity such as wildlife.

Different parts of England form the racing locations to test your driving skills during the intense races.

There are even Showcase Events which add even more thrills like chasing the Flying Scotsman train or watching a giant hovercraft.

It presents more options for gamers who like to have a choice when it comes to playing video games.

Forza Horizon 4 is a beautiful racer set among the captivating scenery. 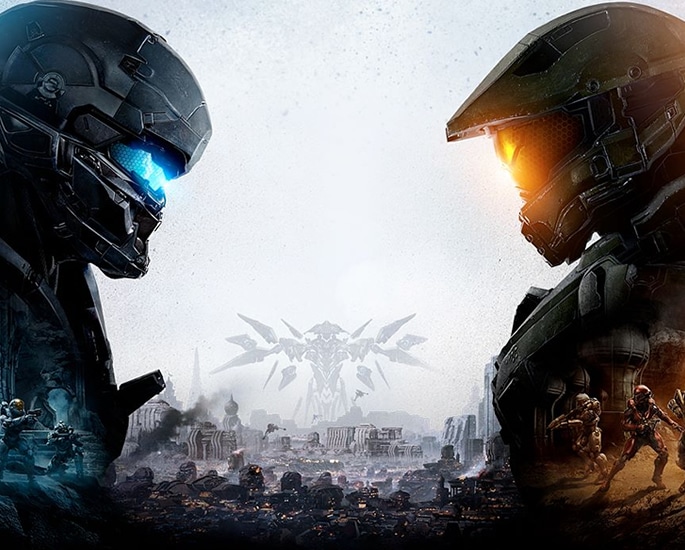 When thinking about Xbox exclusive games, the Halo series springs to mind. It is one of the most successful series and some of the games have even been remastered for the Xbox One.

Halo 5: Guardians was released in 2015 and it provided to be a solid console exclusive.

There is a single-player campaign but to enjoy the game to its full potential, play online co-op modes which support up to four players.

The split-screen option is not available in Guardians and the story is quite short.

Meanwhile multiplayer remains fresh and exciting, especially in Warzone Mode which can have up to 24 players. The large-scale chaos is first-person shooters at it’s best.

It is a mode that cannot go wrong and it is what makes Halo 5 one of the best games of its kind. 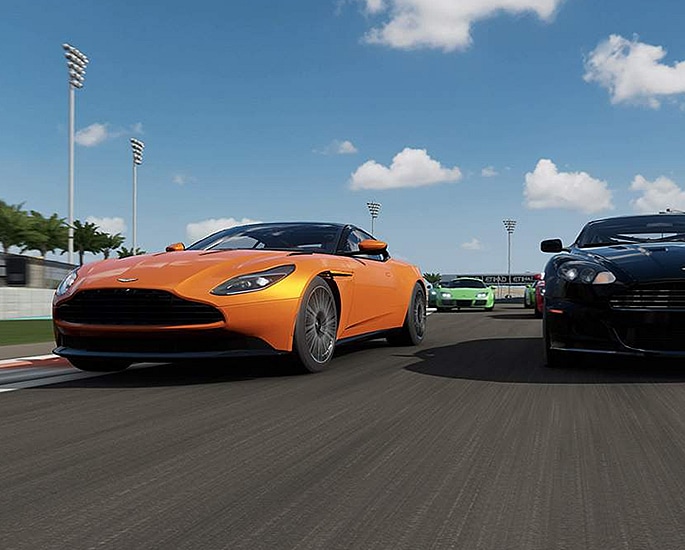 The Forza Motorsport franchise is known for high octane races around a track and the 2017 release is arguably the best one.

That is taken to a new level when incorporating 4K visuals which makes everything look much more authentic.

All of the precision creates memorable moments as you push the cars to their limit.

The game is both fun and realistic. It also makes you feel a sense of accomplishment as you race to collect new cars and win events.

This all comes together to create one of the best racing games available.

These are just 10 games out of several others which are exclusive to the Xbox One, however, for the best gaming experience, you should play these ones.

They all present unique stories and have been designed in various ways to create the best experience possible for the player.

All of them have been recognised as some of the best Xbox One exclusive releases.

New games continue to get released and are of different genres. Each one will be bound to entice a variety of gamers.

Dhiren is a journalism graduate with a passion for gaming, watching films and sports. He also enjoys cooking from time to time. His motto is to “Live life one day at a time.”
What to Expect from Mortal Kombat 11
Borderlands 3: What to Expect when Mayhem Arrives