Borderlands 3: What to Expect when Mayhem Arrives

The fourth instalment of the franchise is set to release in September 2019. Here is what to expect from Borderlands 3 when it comes out.

There are "over one billion guns" according to the reveal trailer

After Borderlands 3 was announced in March 2019, it got fans of the series excited especially because it was also expected to release in the same year.

The new game was teased with the phrase “Mayhem is Coming” before it was officially announced and now it will not be long before mayhem arrives.

The series has been a commercial success and has been a hit among gamers.

Its loot-driven multiplayer co-op gameplay is a unique feature within gaming and it is one that fans have loved. It is also popular for its sense of humour.

With the announcing of a release date came a trailer which gave fans a glimpse of what they should expect once the game is out.

New characters were shown as well as some of the gameplay features that the franchise is known for.

Even though Borderlands 3 is not out until September 2019, it will come around quickly. We have an in-depth look at what to expect from the upcoming release. 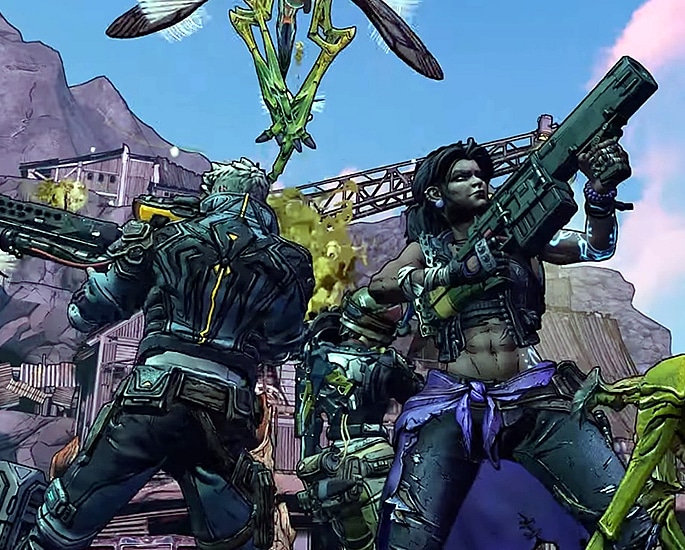 The trailer for Borderlands 3 was released on March 28, 2019, which showcased some of the game.

It did receive mixed reviews by video game websites. Some had said it looked too similar in content and appearance to previous entries in the franchise.

However, the small insight is filled with what you will be getting from the release.

Apart from the graphic-novel visuals that the game is known for, we see familiar characters as well as new ones.

The wide array of over-the-top weapons and the enemies you use them against are also introduced.

All is revealed within vibrant colours, gunfire, a soundtrack to get your attention and the humour that the franchise is famous for.

In just three minutes and 40 seconds, there is a lot which is shown to you which may be enough for returning Borderlands players but it could also entice new gamers.

There have been other trailers since the official reveal of Borderlands 3.

The trailer also revealed a release date of September 13, 2019. Borderlands 3 will be available on Xbox One, PlayStation 4 and Microsoft Windows. 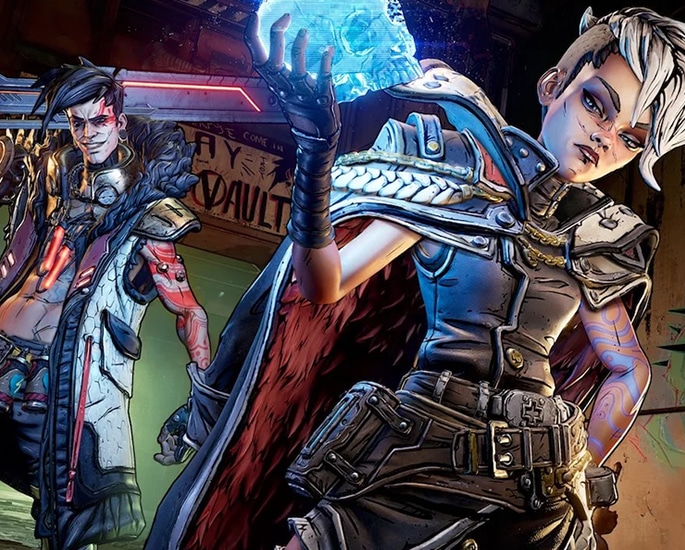 While the trailer did show gameplay, it was only a little hint. However, Borderlands 3 still follows similar principals to the previous instalments.

It is a loot-driven first-person shooter where players choose a character from one of four classes available.

They then take on various missions given to them by non-playable characters (NPCs). Completing missions will gain experience, in-game monetary rewards and reward items. Defeating enemies will also help you gain these items.

The game can be played as a single-player, or with local or multiplayer co-op modes.

There are “over one billion guns” according to the reveal trailer which ranges in damage, ammo capacity and other special perks.

The story follows a new group of Vault Hunters that you play as while shooting and looting through the wastelands.

You face the Calypso Twins, two fanatics with Siren-like abilities who are trying their hardest to claim the galaxy’s ultimate power.

It is your job to stop them from doing so. According to the trailers, you will have help from the other Vault Hunters from the previous games.

It seems like the game has a couple of throwback moments for fans of the series who want to have a nostalgic experience.

With the new game comes new characters to play as. As the four new Vault Hunters, you can explore exotic locations within the extravagant world.

The four Vault Hunters of Borderlands 3 are Zane, FL4K, Moze, and Amara.

These characters have unique and unusual features that will showcase what the game is known for, interesting characters within an engaging story.

Using some of the guns in the game, they can stand up against even the most difficult enemies.

It has been rumoured that characters from previous games will return like Tiny Tina. Ashly Burch has confirmed that she will reprise her role as the 13-year-old demolitions expert.

However, actor Troy Baker said he was disappointed that he wasn’t asked to voice the character, Rhys, again. But Gearbox Software CEO Randy Pitchford said that Baker turned down the role. 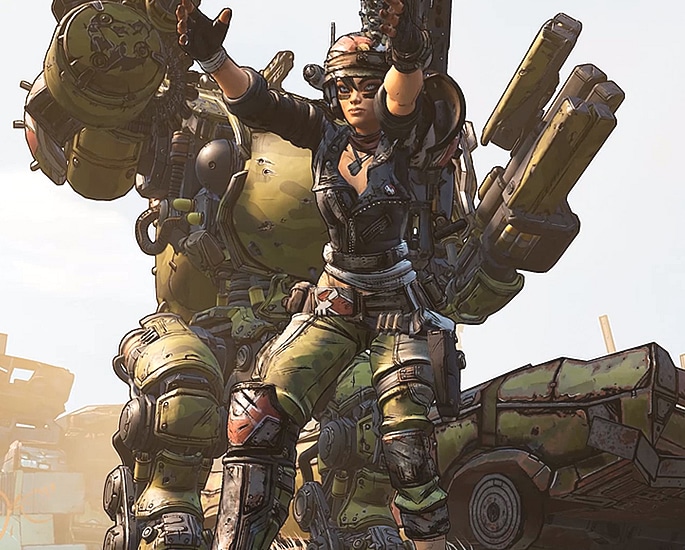 Moze is the one woman army that we are used to in previous instalments of the Borderlands franchise.

When she needs backup, she creates a mechanic item to help. Known as the Iron Bear, it provides an injection of additional firepower.

She automatically pilots it and when fired, it looks immense.

It has been rumoured that upgrades can be made which will help against more difficult enemies.

When needed, Moze can get into the Iron Bear to cause mayhem as it looks like spraying bullets at your enemies using the giant cannon will help.

It is a possibility that when inside the Iron Bear, it will be third-person while any other display will be first-person.

If you are looking for the gunner type experience, Moze is the one to go for. 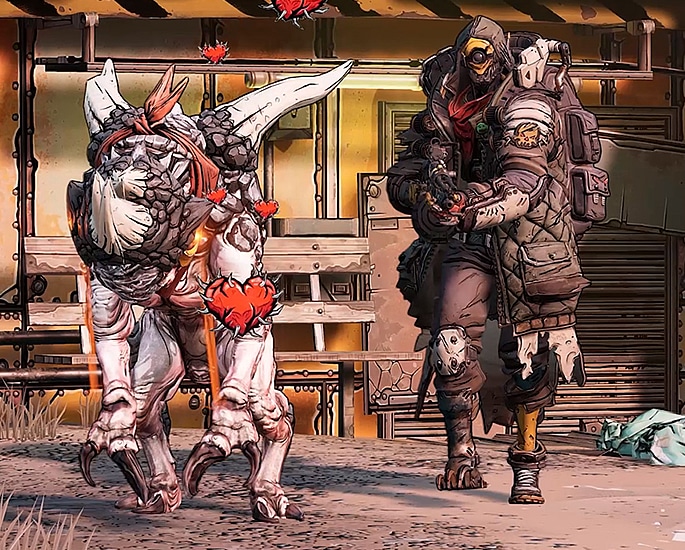 FL4K is all about hunting down enemies. The robotic Vault Hunter uses creatures to help in fights.

Summoning an animal can have a massive effect against enemies. Each creature will have its own set of upgrades.

As you upgrade your creatures, they become stronger and look cooler. This is bound to get gamers excited.

The thought of summoning your own creature to cause carnage among your enemies is an appealing one. The fact that they are loyal to FL4K makes it even more awesome.

FL4K’s appearance is also fitting for the wasteland setting and being armed means that a creature can be summoned to take out one enemy while FL4K takes out the other.

So if you are looking to summon vicious beasts to help you then FL4K is the choice to go for when the game releases. 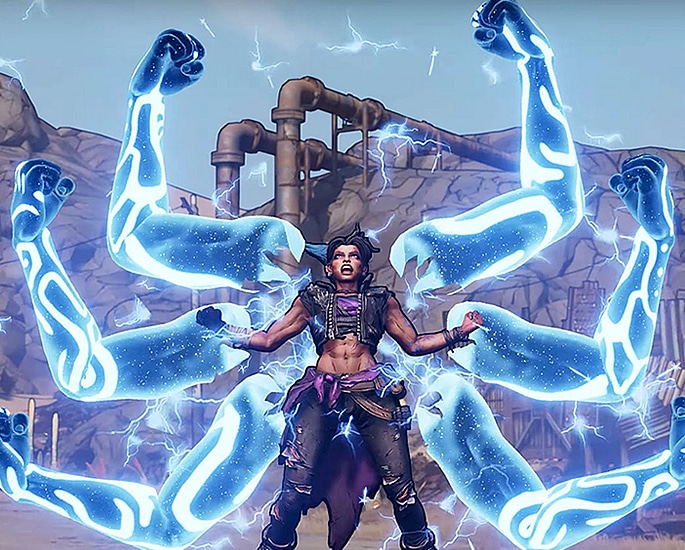 Amara, The Siren is incredibly confident and is always ready for a brawl. Her physical strength will bruise up enemies.

Ferocious punches, as well as weapons, will cause major damage to nearby enemies.

Amara also has the ability to summon fists which are out of this world. She can do this while firing a gun.

This almost divine ability will create illusions but it will also swiftly take out any villains that are after you.

The different ways her ethereal fists can be used may mean that she has different skills and that each character may have more than one skill.

There is no confirmation of this but Amara is a great choice for gamers who want to get up close with enemies and dish out beatings. 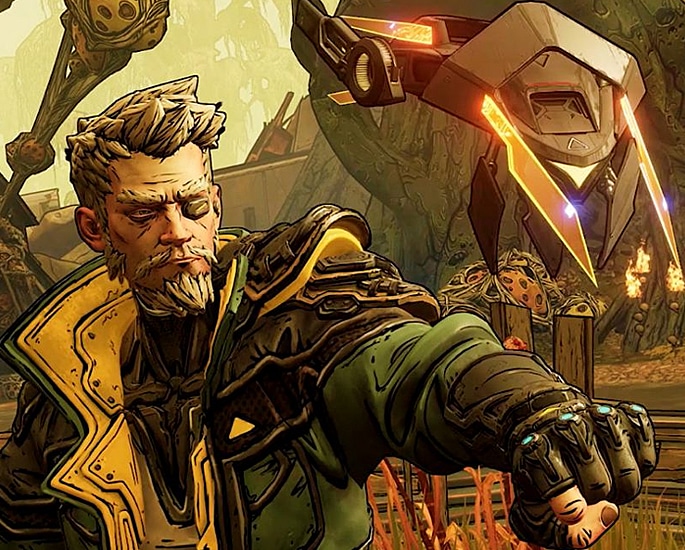 Zane is arguably the smartest of the four Vault Hunters and is all about specialised gadgets for the battlefield.

He has a particular fondness for those that let him sneak into combat, cause mayhem and slip back out again.

Gadgets include a hologram and summoning a drone which is equipped with powerful guns.

This multitude of technology can be upgraded as you pick up more loot and defeat more enemies along the way.

Even though Zane can use the gadgets for stealthy attacks, they can also be used for straight forward violence towards your enemies and causing maximum chaos.

The array of tech that Zane possesses is one for gamers to choose if they like the prospect of being able to infiltrate areas with them.

Though there are some exciting features, not all are confirmed. Nevertheless, Borderlands 3 remains one of the most anticipated games of 2019.

We will have to wait and see if the game’s storyline will live up to previous titles.

With old characters returning, it will be intriguing to see which ones come back and if the four new characters will be as popular.

Every question will be answered when the game releases on September 13, 2019.

Mohsin is a writer, editor, thinker and fan of incomplete sentences. He is also crazy about playing video games and unveiling changes in technology.
10 Xbox One Exclusive Games you Should Play
Indian Groom playing PUBG at Wedding Ceremony goes Viral