Remastered Spyro the Dragon set to Return to PlayStation

The original Spyro the Dragon trilogy is set to be remastered after the success of Crash Bandicoot N.Sane Trilogy (2017).

Our favourite purple dragon, Spyro, is set to return to our PlayStations.

Spyro the Dragon (1998), Spyro 2: Gateway to Glimmer (Europe and Australia)/Ripto’s Rage (US) and Spyro: Year of the Dragon (2000) are being remastered. Much like the original Crash Bandicoot trilogy.

Since then, Spyro has featured in the Skylanders video game series as one of the Skylanders. Also, this year marks the 20th anniversary since the release of Spyro the Dragon in 1998!

Activision said the game will be “remade from the ground up by lead developer Toys for Bob”. The game was originally developed by Insomniac Games.

Why all the Hype?

N.Sane Trilogy was met with positive reviews which eventually led to the demand for a Spyro game by fans.

N.Sane Trilogy provided nostalgia for the older generation of gamers and a new experience for the new generation.

The game offered smoother gameplay and high definition graphics. Like the upcoming Spyro remaster, the game was constructed from scratch.

Vicarious Visions described the game as a “Remaster Plus” as they did not entirely remaster the game but created additional content. New art and audio were included.

New gameplay features include Time Trials across all three games. This mode was introduced in Crash Bandicoot 3.

Furthermore, Coco, Crash’s sister, is now a playable character in nearly all levels which adds a better sense of female representation.

The gameplay across all the Spyro games in the trilogy follow a somewhat similar pattern. They have additional features and improvements in the sequels which will be explained under the individual game headings.

Different from the original Crash Bandicoot trilogy which follows a 2.5D platform structure. Whereas, the Spyro games use a 3D platform.

Although both 2.5D and 3D platforms allow the player to move in all directions, 2.5D follows a singular path. 3D allows free roaming.

The player explores fictional worlds with different realms. The objectives of the games are to collect treasure, complete missions and defeat the boss characters.

The games also feature different mini-games and challenges. A frequent mini-game that appears across the series are the Flight/Speedway levels.

These levels see Spyro attempt a flying obstacle course. Some include flying through a number of obstacles and flame/charge through obstacles with a time limit.

The Spyro franchise was first ignited in 1998 with Spyro the Dragon for the first Sony PlayStation. The game sold 4.8 million copies worldwide.

It was met with positivity and critics praised the quality of the 3D platform game and the graphics.

“It has better graphics, a far more usable camera setup, tighter control, it isn’t incredibly difficult, and is much much more fun.”

Gnasty Gnorc, the game’s antagonist, casts a spell turns all the dragons of the Dragon Kingdom into statues.

However, Spyro (voiced by Carlos Alazquari) was able to avoid this fate. Due to his small size and speed, he was able to escape. The objective of the game is to free all of the dragons and defeat Gnasty Gnorc.

Along the way, Spyro must complete side missions, collect treasure, and chase down thieves who have stolen dragon eggs.

Spyro’s ally, Sparx the Dragonfly, follows Spyro around and acts as his health indicator. He changes colour when Spyro receives damage.

Spyros abilities include breathing fire and a running horn charge.

The second Spyro game, again, did not disappoint. The game received positive reviews and sold 3.4 million copies. Not as much as the first, but still a decent performance.

Spyro, (now voiced by Tom Kenny who is known for voicing Spongebob Squarepants) and Sparx set off for a holiday in Dragon Shore. However, they appear in the world of Avalar.

The duo discover their portal has been intercepted and redirected by the Professor, Hunter the Cheetah and Elora the Faun.

The three characters task Spyro with defeating the warlock, Ripto, who conquered Avalar and corrupted the land.

Spyro must explore the different realms and collect talismans and orbs to progress and defeat Ripto’s minions, Crush and Gulp. 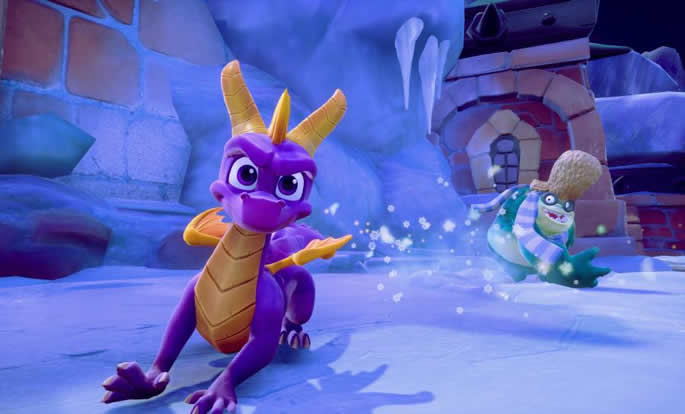 The third instalment was released on Chinese New Year 2000 – which marked the year of the dragon.

Spyro 3 also received exceptional reviews. According to GameRankings, the game placed 19th in the greatest PlayStation games of all time. It sold 3.2 million copies worldwide. Not a large drop in sales.

The dragons all celebrate the Year of the Dragon when new dragon eggs are brought to the Kingdom. However, a thief named Bianca the Rabbit invades and steals the eggs with Rhynocs assisting her.

Bianca does this on behalf of the Sorceress, the main antagonist of the game. Spyro (Tom Kenny reprising the role) again, must travel the realms, recover the stolen dragon eggs, defeat bosses and free “critters”.

Spyro, again, uses gems as currency, to bribe Moneybags into unlocking the cages to free the critters. The critters assist Spyro by activating new areas which he cannot do himself.

In addition, Spyro 3 introduces other playable characters. These characters can only be used at certain levels and all have different abilities.

Sparx is also used in some levels. Hunter makes his return as one of the playable characters. Other include Sheila the Kangaroo, Sgt Byrd, Bently the Yeti, and Agent 9 the Monkey.

Furthermore, other features include a range of mini-games, some from Spyro 2 and some entirely new.

What to Expect from the Remaster?

According to Paul Yan, Chief Creative Officer at Toys For Bob, he said:

“We’re deeply passionate about staying true to the legacy of the original three Spyro games with the Spyro Reignited Trilogy.

“We’ve poured a lot of love into making the personalities and worlds feel just like fans remember them, while also keeping the game collection surprisingly fresh with lush, high definition detail.”

“We’re bringing back the Spyro we all fell in love with 20 years ago.”

The game will use Unreal Engine 4. The software responsible for Fortnight, Injustice 2, Dragon Ball FighterZ and more.

We are sure to experience some amazing animations and cinematic scenes. Not only that, Stewart Copeland will remaster the soundtrack from the originals to add further nostalgia. 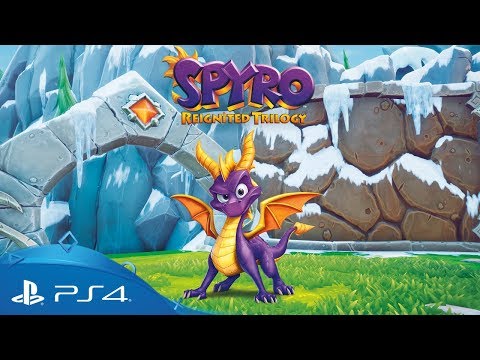 Having seen the trailer, the visuals and audio promise to be stunning. Without a doubt, this will definitely take us back to our childhoods much like Crash Bandicoot N.Sane Trilogy did.

Another amazing game to look forward to in 2018!

Spyro Reignited Trilogy will be released on 21st September 2018. It will be available on PlayStation 4 and Xbox One.