A young Indian couple from Uttar Pradesh got married. They tied the knot even though their families disapproved of their relationship initially.

This prompted the young Indian couple to briefly run away.

The relationship between a young Indian couple was disapproved by their families but this did not stop them as they got married.

The newlyweds were from the district of Rae Bareli in Uttar Pradesh.

After seeing that the couple’s relationship was not accepted by their families, members of the community helped set up the wedding and also attended.

More influential members spoke to their relatives in an attempt to convince them to approve their relationship. They eventually gave their blessing.

A man named Suraj had got to know a young woman and they eventually got into a relationship. They later decided that they wanted to get married.

However, when their parents found out about their plans, they were against it. This prompted the young Indian couple to briefly run away.

After a few days, the young woman returned with her lover to his house but his parents did not accept them. When they went to her house, her parents also shunned them away.

This did not deter their plans to get married but they still wanted their parents’ blessing before going through with it.

News of the issue made its way across the community. They then decided to come together and help the couple. 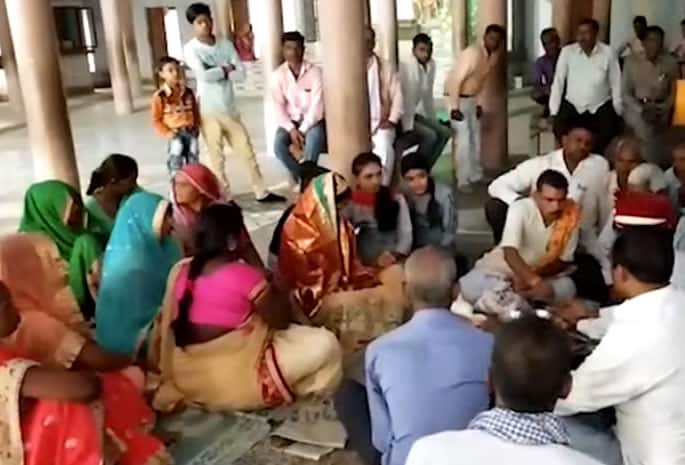 While the wedding venue was being set up, some of the influential community members decided to get things resolved by speaking to the families.

They spoke to their parents in an attempt to change their perspective on the relationship.

The parents of the couple changed their minds and approved of their decision to get married.

After consent was reached, a traditional ceremony took place at a temple in the district of Maharajganj.

Many of the community members attended the ceremony. The families of the couple also witnessed the wedding take place.

Even though the young couple’s parents did not approve of their relationship, they eventually changed their minds.

However, in many cases, relationships, which are not approved by parents has led to shocking consequences including murder.

For example, a couple from Punjab, India who had a love marriage were shot dead by members of the girl’s family.

They had been on their way home when a car containing three of the woman’s cousins stopped in front of them. They forced the couple into their car before driving off.

The couple were then attacked with knives and shot dead before their bodies were thrown out of the vehicle.

A case was registered against ten people while four of them were identified and arrested.

Dhiren is a journalism graduate with a passion for gaming, watching films and sports. He also enjoys cooking from time to time. His motto is to “Live life one day at a time.”
‘Little Miss Attitude’ Mum jailed for Drug Business with Brothers
Wife kills Indian Husband for Talking on Phone at Night