A same-sex couple got married in California. It was a ceremony that showed that love has no borders as one woman is Indian while the other is Pakistani.

"We hit it off instantly and have literally been hanging out ever since!"

An Indian and Pakistani same-sex couple got married in a lavish ceremony wearing traditional wedding outfits.

Bianca Maieli and Saima Ahmad got married in California, which is where they met and live. Their wedding was on April 20, 2019.

Having been married for several months now, Bianca explained how they wanted to incorporate both of their cultural backgrounds into their wedding. She said:

“I’m Colombian and Indian and come from a Christian background. My wife is Pakistani from a Muslim background.

“We were keen on incorporating facets of both cultures in a way that was respectful and personalised at the same time.

“We had four events, each with its own colour scheme and everything was mostly DIY.”

The couple wore coordinated outfits for each event but for the wedding, Bianca wore an ivory-coloured sari while Saima went for a black sherwani with intricately embroidered details.

“We had matching outfits for each event which were all designed by Bilal Kazimov, a friend and an incredible designer.”

Bianca completed her bridal look with a detailed maang tikka, gold bangles and pearls. Saima accessorised her look with a dupatta on her side. 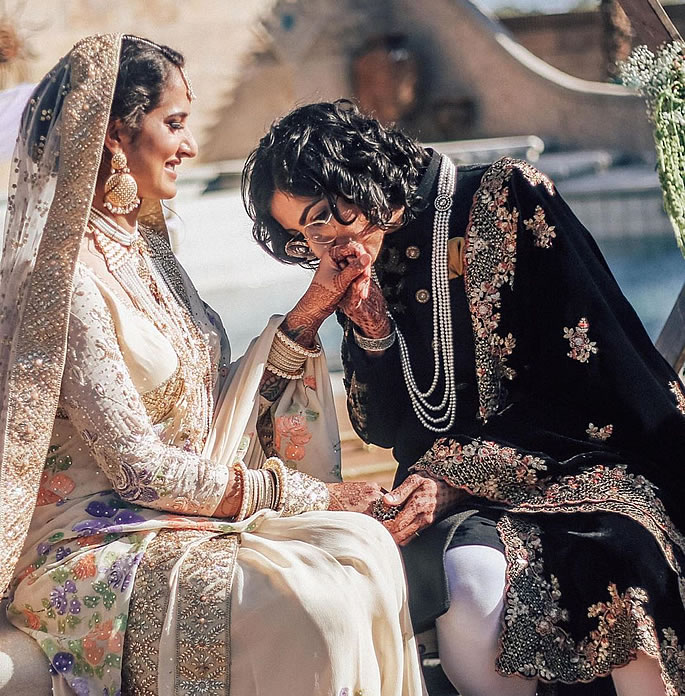 Bianca explained how she and Saima got to know each other.

“Saima and I met through mutual friends in 2014 at a spoken word performance called ‘Coming Out Muslim’. We hit it off instantly and have literally been hanging out ever since!”

“When we met, neither of us was looking for a serious relationship but we did like being with each other.

“We did date but it took us an entire year before we could admit what we shared was indeed very special and that we wanted to be together.

“A few years into our relationship we started discussing the possibility of marriage.

“Saima even asked me about the kind of ring I was looking for but I wanted to propose to her and decided to surprise her.”

“I popped the question on a trip to Colombia.”

The same-sex couple’s wedding took place in Bianca’s father’s back garden as she added:

“The wedding was held in my dad’s backyard with 200 guests in attendance.

“One of our best friends officiated the ceremony which we kept short so we could spend most of our wedding on the dance floor!

“Our friends and family really came together to help us bring together our vision.

“We picked the flowers the day before from the flower district in Downtown Los Angeles and arranged them all on the day of the wedding.

“Every small detail was splendid and the amount of work everyone put in for our special day was truly heartwarming. It really did take a village and we couldn’t have done it without them!” 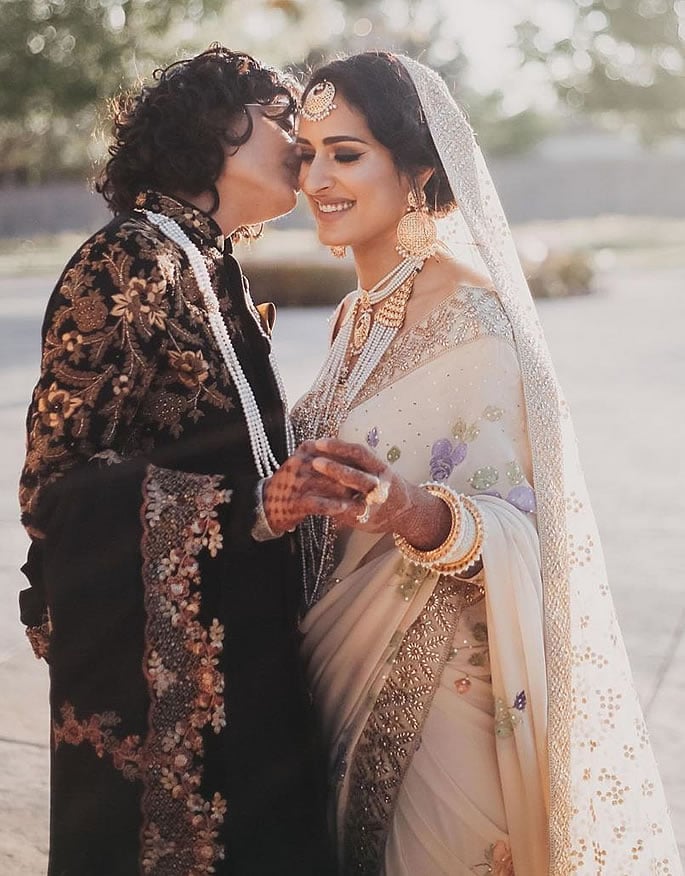 Bianca went on the talk about each of the wedding events she and Saima had.

“The celebrations began with the dhoki, which was dominated by blue. The mayoun, which is essentially the haldi ceremony, of course, was all yellow.

“Our mehendi featured lots of pink. The wedding was dressed in white, gold, and lavender.

“Our engagement colours had been black and gold so we wanted to contrast that. We added the lavender because we got married in spring.”

Same-sex marriage has not been legalised in India but gay sex was in September 2018.

Pakistan has no same-sex marriage and gay sex carries the death penalty, but there is no record of this being enforced.

The country has introduced stronger protections for transgender people.

Bianca told Wedding Sutra: “We’ve had many challenges before. But since we’ve been together those challenges have seemed less daunting when faced together.

“It truly feels like a blessing that we were able to find one another.”