In an exclusive Gupshup with DESIblitz, Niranjan Kamatkar shares his insight on gay rights and the importance of recognising homosexuality in the British Asian community.

When a parent or both reject their gay child, it is condemnable as selfish and ignorant attitude of the parents.

March 29, 2014 was no ordinary day for Niranjan Kamatkar and Subodh Rathod. Because, on this day, England and Wales legalised same-sex marriages.

Having been a couple for two decades, Niranjan and Subodh could finally join together in their long-awaited matrimony and call each other husband and husband.

One year on, DESIblitz chats exclusively to Niranjan, the artistic director of art-based charity, Wise Thoughts, to find out more about married life as the first same-sex Asian couple.

How does it feel to be treated as equals in the eyes of the law and society?

“It’s incredibly empowering to have legal recognition and knowing that should anything happen to either of us, the other’s voice will be the one that authorities will have to listen to.

“Hopefully, other couples feel that it is easier now to make a commitment if they want to.”

How has your charity Wise Thoughts been received? 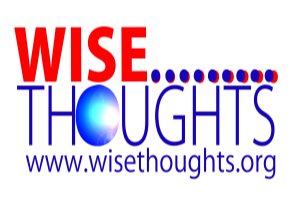 “It has been generally a very positive year at Wise Thoughts, the issue-based arts charity that also produces London’s LGBTQI art festival GFEST.

“GFEST 2014 in November has been dubbed as a great success by media. A number of people we meet in professional capacity still keep congratulating us on the marriage.

How do South Asian people react when you introduce yourselves as a gay couple?

“Generally our response within the South Asian community members has been positive and we point out that we’re a married couple whenever an opportunity presents.

“Most South Asian people (particularly older community members) seem to be aware of us as a couple and don’t ask direct questions now – which they would have a few years ago. For example, ‘Are you married? How many kids?'”

How easy or hard was it ‘coming out’ to your families?

“It has been a long, patient process for both of us. We were fortunate that they have accepted us for who we are, like any family would, if they are genuinely concerned about well-being and happiness of the members.

“We did not feel the need to spell it out to everyone if we sensed they were not ready yet.”

How did you break the news to your families about getting married and what was the reaction?

“We just told them we are getting married! Then Subodh’s mother started doing the calls to other family members to inform them of the date and time.

“All of them know us as responsible individuals and we did not directly receive any negative reaction. But we guess, by then, they had seen us as a couple for over 19 years.”

Do you feel your marriage will encourage other Asian gay couples to get married?

“We believe yes – why not? We were really excited to hear the news that a young gay couple in Mumbai got ‘married’ in a traditional ceremony that was administered by a female priest, and friends and family members were present.

“We’re not sure whether same sex marriage for UK citizens will encourage those living in South Asian countries to possibly come to UK and feel accepted. We hope ultimately they may not need to, if the countries make the appropriate legislative changes.”

Many Asians still don’t accept homosexuality. Do you find yourselves living ‘outside’ of the community? 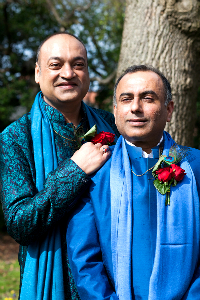 “No one threw us out for who we are. In fact, most of the time we would get a joint invitation to events.

“But we still understand the larger struggle that a number of young Asian gay people face.

“When one parent or both reject their gay child – for who the person is – it’s condemnable as selfish and ignorant attitude of the parents. If they want happiness of their child they’d have to come to terms with the fact however long it might take.

“They also need to realise it’s nothing be ashamed about, but to celebrate that they have a gay child. We know we are far from that celebratory acceptance in South Asian communities but we are sure, it is just a matter of time.”

What is your view on Marriages of Convenience?

“Marriage of convenience is not truly going to work as marriage or union of two souls in most cases, if it’s only done for deceiving family members and society.”

“We need to acknowledge that this is an issue in our community and need stronger gay and straight ambassadors to address these issues.”

How does it feel that your home country criminalises same-sex marriage?

“It feels horrible and [our concern] is not limited to just India or Kenya, where we were born.

“We’re both deeply concerned that some countries around the world are actively promoting anti-gay culture and campaigns with renewed interest. While other countries refuse to acknowledge their LGBT communities in advancement of the human rights of all their citizens.”

What do you think can be done to promote better understanding and acceptance of gay rights in the Asian community?

“More visibility of proud as well as responsible role models need to be promoted by the media. More Asian community groups need to discuss or present the issues around same-sex relationship, parental responsibilities.

It is easy to assume the gruesome battle for sexual equality is over now that same-sex couples are lawful. But such a view cannot be more wrong. Wider social acceptance is a hurdle yet to be overcome, particularly in the British Asian circle.

Niranjan and Subodh are determined to fight on. And so should anyone and everyone who cares about equal rights for all.

Scarlett is an avid writer and pianist. Originally from Hong Kong, egg tart is her cure for homesickness. She loves music and film, enjoys travelling and watching sports. Her motto is “Take a leap, chase your dream, eat more cream.”
To Be or Not To Be a Virgin
What is Cybersex and is it Real Sex?