The Rise of British Asian Theatre

A new generation of British-born Asian playwrights are producing work that is unashamedly provocative, honest, and challenging. British Asian Theatre has rapidly achieved much recognition in the Arts industry.

Theatre in Britain is becoming much more diverse and far-reaching.

There is a glaringly obvious under-representation of plays written, performed and watched by Asians about what it is like to be British-born.

Yet the niche for theatre that combines British and Asian cultural influences is slowly being recognised.

They explore and interrogate issues that dominate the political sphere, and affect contemporary society as a whole. Namely, multiculturalism and identity, religion and culture, stereotypes and racism, and what they may, or may not mean, today.

Britain’s rich tradition of theatre and playwriting has always been producing influential plays, but for the first time, there is a distinctly Asian influence. These playwrights are only in their late teens or early twenties. Many of them are women. Many of them are from low socio-economic backgrounds.

DESIblitz takes a look at some of the most influential British Asian Theatre plays of the last decade: 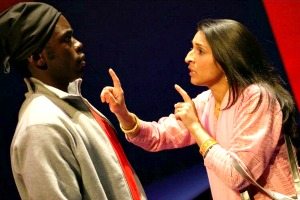 Meaning dishonour in Punjabi, Behzti ignited violent protests and rioting by local Sikh leaders when it debuted at the Birmingham Repertory Theatre.

It was found to be deeply offensive to their religion. The majority of the play takes place in a Sikh Gurdwara and includes a particularly controversial scene involving rape, physical abuse, and murder.

Critic Helen Cross insisted that Bhatti, who is a British-born and Sikh herself, writes with the ability to uncover the hypocrisy that is found in religion:

“It is offensive, furious, bloodthirsty and angry in all of the right places…[and] tremendously important,” she added.

The play brought up debates over to what extent religious sensitivities should matter in multicultural Britain. Also, are British born Asians are ‘less religious’ than migrant Asians?

Two days later the play was cancelled with Bhatti being forced into hiding. Yet in 2010, it was finally re-staged in London. The blasphemy argument is no longer a credited reason to neither censor nor cancel plays. 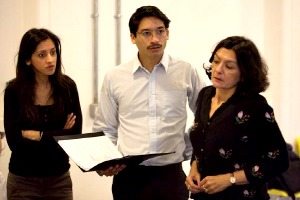 Chandrasekhar is a young playwright who was born and grew up in Chennai, India. Through this play she proves that even Asians born and living in their ancestral homeland are not at all cut off from the influences of the West pressing upon Asian identity.

This play explores the contradiction between India’s embrace of Western technology and adherence to traditional values.

Deepa is a high achieving girl who is recorded enthusiastically having sex with her boyfriend on a mobile phone.

As the video clips circulate, India’s sexual-double standard is highlighted. The disgrace that follows falls on Deepa and not her Asian boyfriend.

The play examines how Asian culture is torn between modernity and tradition as well as how British-born Asians may struggle to align both a British and an Asian identity. 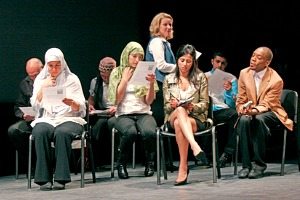 Testing the Echo is about a dedicated teacher who teaches a class of various nationalities the English language and about British culture so her students can pass the citizenship test.

This play is different as it is written by a White British older man, who is already established as a successful political playwright.

Critic Charles Spencer confirms that this play tackles big political questions: “Is ‘Britishness’ compatible with radical Islam? Are we sleepwalking into segregation? Does the very concept of multiculturalism preclude the possibility of a shared identity?”

As Britain becomes ever more fractured, the play is a timely, witty and criticising look at The Home Office’s current campaign to define Britishness by questions such as: How many members are in the Welsh Assembly? 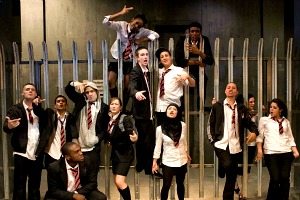 Written by possibly the most recognised British Asian playwright, this play explores multiculturalism and lack of national identity from a different stance; that of a White Boy.

In an inner-city London school, white skin puts you in the minority. Ricky both admires and idealises his ethnic schoolmates, especially Jamaican Victor, but Victor argues: “Just because you learn the lingo, it doesn’t make you one of us!”

This play suggests that it is actually white boys who are most afflicted by an uncertainty of who they are. 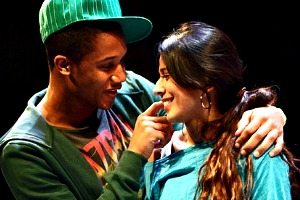 This is Gupta’s first full-length solo play, commissioned by Hampstead’s new writing festival when she was only seventeen. The play begins with a very light-hearted classroom scene in which a multicultural group of friends all poke fun at one another’s religions, accents, cultures and skin colour.

Fatima Merchant defies Muslim stereotypes. She smokes, drinks, parties, and has a white boyfriend. Then, on the eve of her eighteenth birthday, with no word or warning, she adopts the hijab. This one defiant action enables the exploration of how British people see the hijab.

Is it attacked because it oppresses women, or does doing so show an ignorant view of Islam? Is it a cultural or religious garment?

The play certainly criticises the idea of a free and accepting multicultural society because, suddenly, to her friends and family she is no longer who they thought she was. Her mother calls her a “fundamentalist post-box”, her Irish boyfriend is driven to violence as he attempts to rip it from her head, and one Pakistani British friend sees Fatima’s decision as a betrayal to women’s fight for freedom. 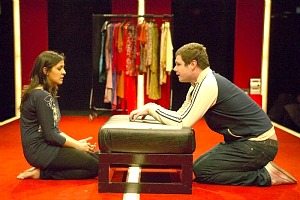 Bano is another incredibly young playwright who had her debut play commissioned by the Royal Court Young Writers Festival. Shades is about a single British Asian Muslim woman in her twenties.

She is a university-educated events organiser, called Sabrina. She lives in London and is looking for love. In the course of the play Sabrina has to choose between the superficially sophisticated Ali, and the more devout and traditional Reza. It is almost like choosing between her British identity and her Muslim identity.

However, as Charles Spencer points out, this play provides a hilarious reminder that actually: “All Muslims are not Jihadist Mullahs.”

Bano’s real success lies in her portrayal of a sympathetic picture of devout Islam. Reza has no time for violence and wishes to be regarded as both English and a follower of Islam.

More recently, Harlesdon High Street by Abhishek Majumdar, is a new play in production at the Jackdaw Theatre, London. It is about three first and second generation Pakistani immigrants trying to make a living, life and home in the UK’s cultural capital, London. It is in production between June 4-22, 2013.

Theatre in Britain is becoming much more diverse and far-reaching. But are British Asians themselves interested? Or are these often controversial plays harmful and unwelcome?

British Asian Theatre has developed hugely over the years, its ability to expose a socio-political insight into local Asian communities and perspectives is astounding.

It is not afraid to say what it wants to, how it wants to, and for that reason alone these plays as these have received appreciation from critics and audiences alike.

Sophie is a Drama Graduate addicted to British Asian Theatre. She dreams of exploring the world and finding a career that is exciting and rewarding - “Life is a blank canvas, throw all the paint at it you can.”
The Delights of Pakistan’s Lahore
The Legacy of Shiv Kumar Batalvi