British Asian Theatre and the Influence of Bollywood

British Asian Theatre is slowly growing in frequency as more playwrights are finding outlets to create new plays. But are they relying too much on Bollywood adaptations?

“[British Asian Theatre] serves up Indian culture in the most entertaining way possible."

It is no secret that Bollywood counts as the most popular performance art for Asian communities living in Britain. When it comes to live British Asian theatre though, the unfortunate reality seems to be Asians are just not interested.

The general consensus amongst critics is that the doors still remain closed to British Asian playwrights for many reasons. One being that the few nationally established and commercially successful Asian theatre companies have a damaging obsession with Bollywood.

Leading Asian theatre groups like Tamasha Theatre Company, seem to be taking their artistic inspiration from the colourful, glittering saris, tropical climate and melodramatic love stories of Bollywood, and fusing them with English literary classics.

Recent box office hits include a Bollywood take on Wuthering Heights (2009), and a production of Lorca’s The House of Bernarda Alba (2010) set in the Punjab. Tara Arts, another dominant British Asian theatre company, focuses on reinterpreting classics like Tamasha, most recently Shakespeare’s The Tempest (2008). 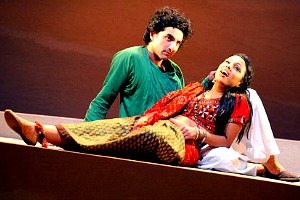 Even outside Asian theatre, looking at more mainstream mediums, the Asian presence leaves much to the imagination. But it is seriously lacking in originality. The prestigious Royal Shakespeare Company has produced Much Ado About Delhi (2012).

In British film, there has been a big-budget Bride and Prejudice (2004), and TV’s BBC has recently aired a Bollywood version of the opera Carmen (2013) set in Yorkshire.

One critic, Lyn Gardener argues that the majority of what British Asian theatre has to offer is: “Riddled with cliqued jokes and two-dimensional caricatured Bollywood stereotypes.”

Janet Steel also agrees, labelling Asian Theatre in this form as ‘tourist’ theatre. She explains: “It serves up Indian culture in the shiniest, most entertaining way possible. It does little to present the broader range of stories out there, and the more nuanced aspects of a writer’s perspective.”

It sadly appears that’s to get Asian work on major British stages that individual companies go for a safe bet to bring the crowds in, appealing to the Asian love of Bollywood, and the white English idealistic view of India and South Asia, Asian-British identity. 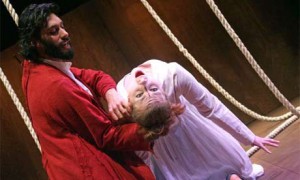 Despite Tamasha’s undisputed commercial success, their winning shows do not fully recognise and understand the cultural shift in Asian identity that has been occurring through recent years.

Unlike forty, thirty or even twenty years ago, the Asian population in Britain is now largely made up of second and third generations of British born Asians.

Dual-identity is only recently becoming a cultural phenomenon. Results of the UK 2011 Census reveal that British Asians make up over one million of residents in London alone, and already heavily outweigh the number of migrant Asians in London (399,000).

People who embody the idea of a complex, and often conflicting and confusing British and Asian identity is not something that can be explored by crudely cutting and pasting bits of one cultures art with another cultures art, both of which often champion outdated traditions and principles as many people see it today in 2013.

Gardener says: “Equate the intolerant and repressed Victorian family values with those of modern, British Asian families. With a slight change in climate and a suitable town where ethnic minorities are common, you have your adaptation. No more thought seems necessary.”

She continues: “It appears that in order to comment on Asian culture in mainstream theatre today, we have to compare it to English culture of the 19th century.”

“Have Asians remained culturally stagnant for forty years since setting their roots firmly in Britain? Why are we not seeing those other stories in mainstream theatres?” 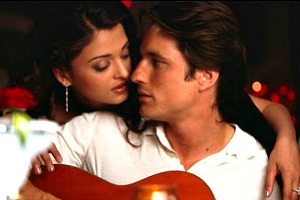 Living in Britain for so many decades, Asian playwrights and directors really don’t have much of an excuse for using other texts and storylines and changing them a little.

Originality, individuality and unique storylines are key to uncovering the true lives of Asians living in the UK. And the lack of this is one of the key issues which is holding British Asian Theatre back.

Of course that is not to say that all theatre is made of adaptations, but they are most definitely few in number. The problem is that the high frequency of Bollywood adaptations have saturated Asian art and theatre. This is preventing critics and Western theatre to take the work of British Asian’s seriously.

It is important to remember that British Asian’s have already created their own lifestyle and identity, they don’t need to rely on the stories of others in order to tell their own.

How else is Asian theatre going to flourish if it isn’t allowed to evolve into an art form that is directly relevant to the people most likely to be interested in it? Namely, Asians!

Sophie is a Drama Graduate addicted to British Asian Theatre. She dreams of exploring the world and finding a career that is exciting and rewarding - “Life is a blank canvas, throw all the paint at it you can.”
The Legacy of Shiv Kumar Batalvi
Shimla ~ The Lovers Destination