Indian polygamist Ziona Chana, the patriarch of arguably the world’s largest family, has passed away leaving dozens of wives behind.

A polygamous Indian man, thought to be the patriarch of the “world’s largest family”, has passed away aged 76.

He reportedly leaves behind 39 wives, 94 children and 36 grandchildren, who helped turn his family into a tourist attraction.

According to Zoramthanga, Mizoram’s Chief Minister, Chana died due to health complications relating to diabetes and high blood pressure.

Zoramthanga released a tweet to announce the sad news.

With heavy heart, #Mizoram bid farewell to Mr. Zion-a (76), believed to head the world's largest family, with 38 wives and 89 children.
Mizoram and his village at Baktawng Tlangnuam has become a major tourist attraction in the state because of the family.
Rest in Peace Sir! pic.twitter.com/V1cHmRAOkr

Ziona Chana was the leader of a minor Christian sect named the Chana Pawl, which maintains a tradition of polygamy.

Ziona Chana passed away in a private hospital. Speaking of his death, Dr Lalrintluanga Zahau, director of the Trinity Hospital in Aizawl, said:

“Ziona was suffering from diabetes and hypertension. He was undergoing treatment at his residence in Baktawng village for three days.

“But his condition deteriorated and he was rushed to the hospital, where doctors declared him dead.” 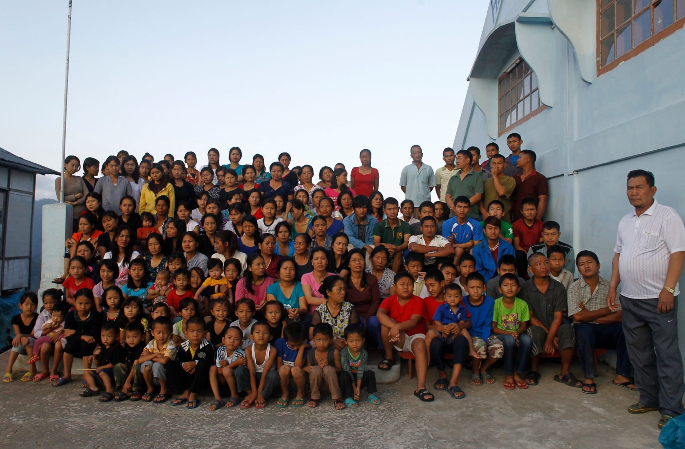 Ziona Chana married his first wife, Zathiangi, at the age of 17.

The family’s extraordinary living arrangements attract tourists to the building all year round.

Due to the number of visitors, Chana also built a guest house for people who travelled to meet them.

Chana’s sons and daughters-in-law lived with him in Chhuan Thar Run.

However, in keeping with Indian traditions, his daughters moved away after marriage to live with their respective husbands.

Chhuan Thar Run also has a bedroom on the ground floor, where Ziona Chana took turns sleeping with his multiple wives.

According to reports, the wives adhered to a rota to decide who would attend to him on a given day.

Speaking of his family in a previous interview from 2012, Chana said:

“I consider myself a lucky man to be the husband of 39 women and head of the world’s largest family.”

According to a 2019 anthropological study titled Escaping Prophets in Zomia: The Sect of Zonia, Ziona Chana’s family is “ranked by the Guinness Book of World Records as the biggest family in the world”.

The study also says that there were instances where Chana married multiple brides at the same time.

According to a 2020 study by Pew Research Centre, only around 2% of the global population lives in polygamous households.

Most of the world prohibits polygamy, and the United Nations Human Rights Committee is calling for it to be abolished as it violates a woman’s dignity.