Amir Khan and Kell Brook will finally fight after years of back-and-forth. But where did their rivalry stem from?

"I used to school Kell in the ring."

Amir Khan and Kell Brook will finally fight on February 19, 2022, settling their rivalry once and for all.

Their dislike for each other is much publicised.

Years of bad blood, sparring claims, snide comments and bold predictions have come from both sides.

But a fight never materialised.

Now, the pair will finally get into the ring, even though both men are nearing the end of their respective careers.

While there is a rematch clause in place, Khan and Brook insist it will not be needed – confident that one will suffer a beatdown so humiliating they won’t want to do it again.

But how did their rivalry reach this point?

We explore the history of Amir Khan and Kell Brook’s rivalry. 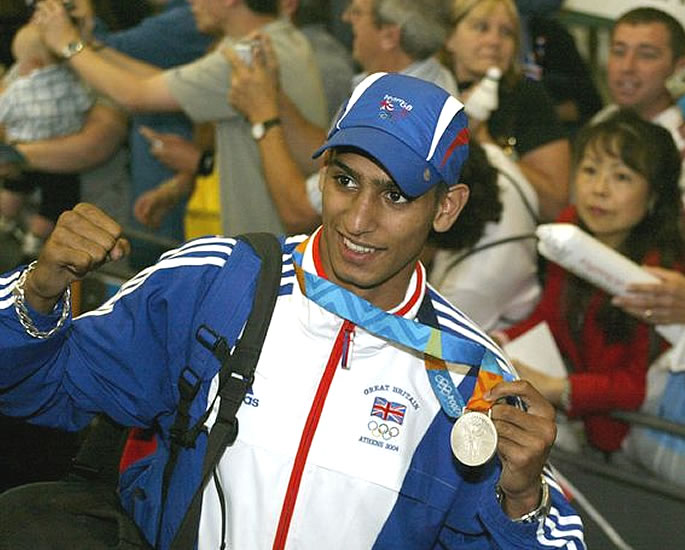 The Olympic camps is where their feud started.

Both Amir Khan and Kell Brook were promising welterweight fighters in their teens, both competing for a place at the 2004 Olympic Games in Athens.

But it was Khan who was selected to represent Great Britain.

Khan went on to win silver at the age of 17, becoming Britain’s youngest boxing Olympic medalist.

With his Olympic success came fame and recognition, something Brook has always claimed he has lacked.

Khan ended up becoming world champion and reigned from 2009 until 2012. 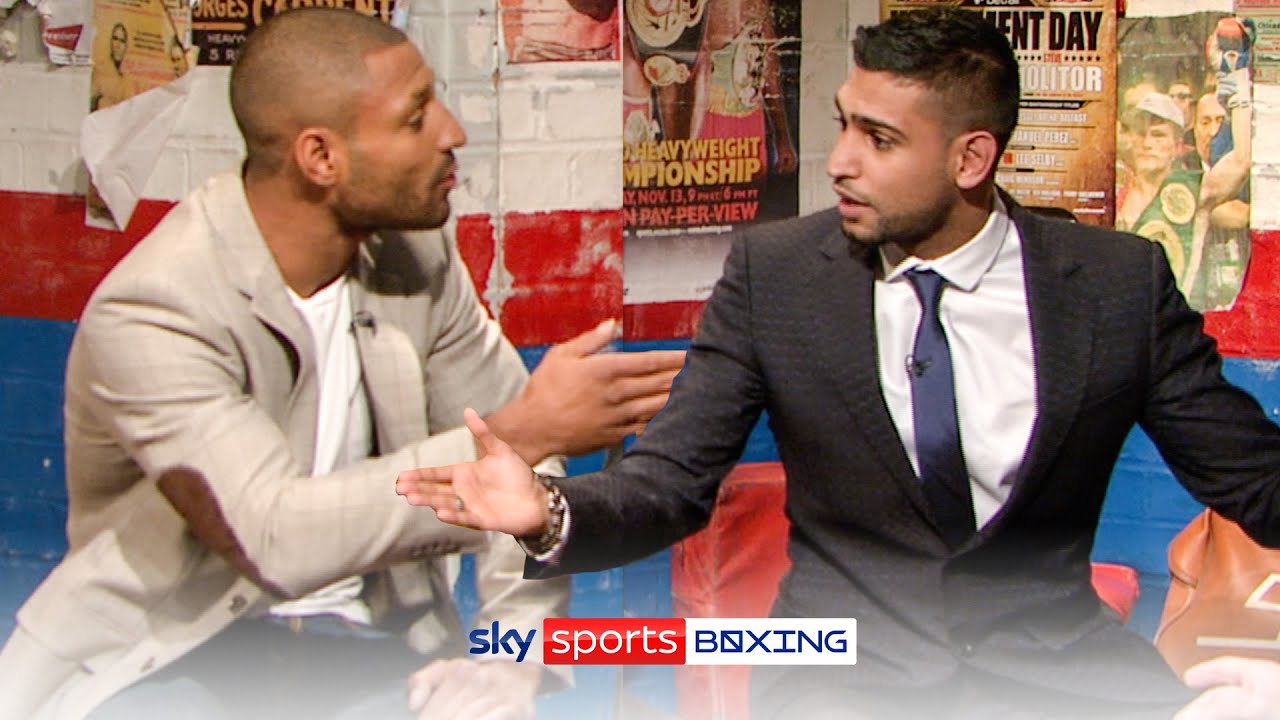 Their feud came into the limelight in 2012 when the pair appeared together on the Sky Sports show Ringside.

It initially seemed friendly as there were hopes for a fight.

But Khan then jumped at the opportunity to add insult to injury, claiming he “schooled” Brook when they sparred at the Olympic camps.

Khan began: “We had great sparring sessions – you know what happened Kell.

“I used to box Kell all around the ring. I was training for the Olympic games at the time and Kell was a junior and I used to school Kell in the ring.”

Since then, Khan has added more claims about that sparring session, saying Brook was “padded up like a pillow” in protective gear.

He said: “He used to come in with his dad Terry, bouncing around. And after the first spar, he never bounced around again.

“I used to wear the big gloves so I didn’t hurt him and no head guard so that way he had a chance.

“He was all padded-up from head to toe, just so he doesn’t get beat. And I’d still get them shots in.”

“So that’s like why when we sit there and he talks about it like he used to beat me up in sparring I just think, ‘what are you talking about?!’ 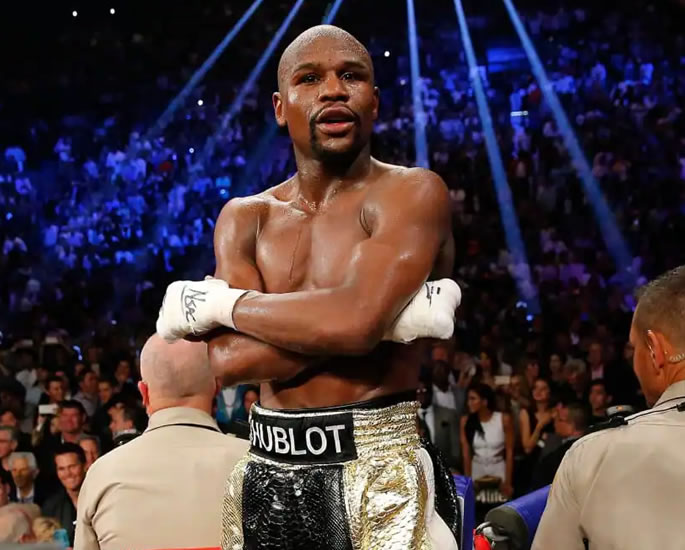 Talks continued to break down and in 2015, Kell Brook goaded Amir Khan for pursuing a fight with Floyd Mayweather.

Brook said: “He’s been bugging Mayweather for the fight for years, he hasn’t got the fight, so what’s the next fight that’s bigger – me and Khan.

“I’ve said it from day one. I’ve said it that his whiskers are delicate and when this brownie hits his chin, it’s going to shatter and he’s going to do that dance that he likes to do.

“He’s brittle. He’s Bambi on ice, all rolled into one.” 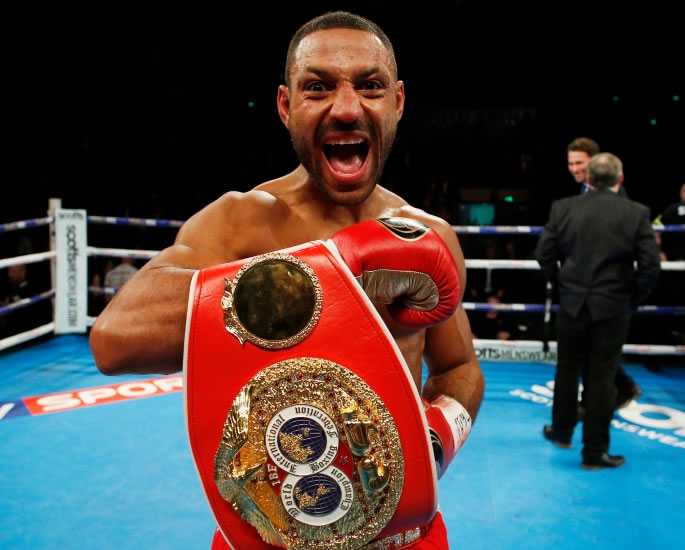 Kell Brook was the IBF welterweight world champion while Amir Khan was looking to get back into contention following a brutal KO loss against Canelo Alvarez.

Talks between Brook and Khan had been ongoing.

But even though Khan was not a world champion, he still demanded a 70-30 split in his favour rather than 50-50.

This forced Eddie Hearn’s Matchroom and Brook’s father Terry to walk away from negotiations.

He said: “Terry stood up, shook my hand, said, ‘We are not doing business’, and walked out.”

Khan then criticised Brook and Hearn on Twitter, writing:

“Eddie I’m the A-side and you and Kell know he will make more than he did against [Gennady Golovin].”

“I offered more as a guarantee so forget the percentage.”

Instead, Brook took on Errol Spence Jr, who would end Brook’s championship reign.

Khan later stated that his rival “didn’t want the fight”.

He had said: “My team sat down with Brook and his manager, we tried to make the fight and Brook said he doesn’t want the fight, so it’s not happening.

“I want the fight and Brook has just walked away from it; he doesn’t want it.

“I was getting the blame for not taking the fight, and now when I’ve said ‘yes, I’ll take the fight’, Brook has stepped back and made excuses.”

But even when Hearn signed Khan to his Matchroom promotion alongside Brook, the pair continued to clamour for a fight.

In 2018, the fight was almost close to being secured before Khan ended it by opting for a bout against Terrence Crawford.

A Deal is Finally Done 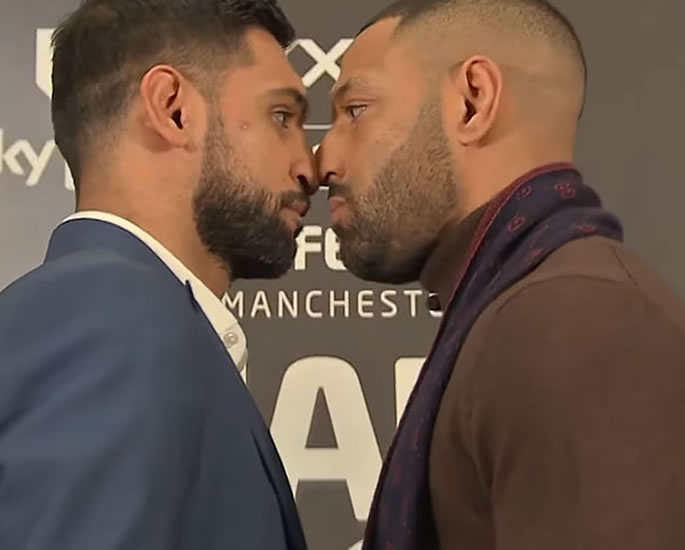 In 2021, it was revealed that the fight was finally on, with BOXXER’s Ben Shalom leading the promotions.

At their first press conference, there was no love lost between the British rivals.

“I really dislike the man and I really can’t wait to punch his face in.

“I can’t wait to get my knuckles to the nearest point of the gloves and drill it straight into his face.”

“The trainers used to say ‘just go in and use one hand against him today!’

“You will see on February 19 how I school and play with this guy, just like the early days.

“Why is it I got picked for the Olympic team? Because I was schooling Kell Brook with one hand.

“I want to hit him right now. He’s lied about why he kept me ducking me so long.

“I would have gone to my grave irritated and angry if I’d not smashed him to the ground.”

Brook went on to say that he only wanted mutual respect from Khan.

He continued: “There’s no love lost, we don’t like each other.

“This isn’t just hype, this is as real as it comes. I don’t like him, he doesn’t like me.

“And I want to punch him hard. He’s never given me any respect, or acknowledged me as a great fighter.

“I’ve always acknowledged him; I think he’s done great in his career and I’ve never dissed him in that way.

“All the years and spite between us, it means everything to both of us. There’s definitely fireworks in this fight, make no mistake.”

Kell Brook and Amir Khan have had a long rivalry and on February 19, 2022, they will finally face off.

Although they are no longer in the prime of their careers, their genuine dislike for one another suggests that neither fighter will take a step backwards as they look to secure bragging rights at Manchester’s AO Arena.

Dhiren is a journalism graduate with a passion for gaming, watching films and sports. He also enjoys cooking from time to time. His motto is to “Live life one day at a time.”
Ranveer Singh to Play NBA All-Star Celebrity Game
Nasser Hanif on ‘Around the Wicket’, Cricket & Racism