Danny Boyle’s movie Slumdog Millionaire set in the slums of Mumbai and a story of rags to riches wins four Golden Globes.

Slumdog Millionaire has shown that a movie with a Bollywood and Hollywood mix can make it very big. Winning four Golden Globes, it has proved that a rags to riches story featuring  Indian actors that is warm, intelligent,  ironic and touching, is fully acknowledged in the West for its art,  performances and music.

Based on the novel written by Vikas Swarup,  screenplay by Simon Beaufoy (of Full Monty fame) and film direction by Danny Boyle (of Trainspotting fame), the film uses the backdrop of the Indian version of the  ‘Who Wants to Be a Millionaire’ game show to tell the story of a boy called Jamal Malik who is from the slums of Mumbai. Jamal  goes onto win on the top prize in the show but is accused of cheating for knowing so much being a mere boy from the slums.  The story unravels how Jamal’s experiences of slum life helped him answer the questions for the show and him  losing and winning his girl.

The film won the awards for the following categories at the Golden Globes, held in Los Angeles on 11th January 2009, in the USA.

One of the most significant awards won by the film is that of the Best Original Score for music, which was won by no other than the Bollywood maestro A.R. Rahman. Having composed huge blockbuster Bollywood soundtracks such as Guru, Dil Se, Lagaan, Rang De Basanti, Jodhaa Akhbar and Ghajini, this award for Rahman makes history. As he is the first Bollywood composer to win a Golden Globe and shows that music composers from India can now fully compete at this level.

Danny Boyle, who won the Best Actor category award for the film is ecstatic and very pleased at the reaction by the film fraternity and impact of the film at the box-office. In interviews, he said he was challenged with making a movie that depicts some realism of Mumbai using this tale of Jamal. He immensely enjoyed the experience of working in Mumbai and also took the opportunity to help some real children from the slums by giving them support for their future education.

Dev Patel, was chosen by Danny because he fitted the look of Jamal very well. Relatively unknown until this movie, Dev was taking in the whole experiences of the Globes on the red carpet dressed in a smart black suit, white shirt and tie.  Similarly, complete newcomer, Freida Pinto was selected by Danny after auditioning many Bollywood actresses for the role because he felt she had the freshness and simple look he needed for the part. Freida was dressed in a deep mustard evening dress at the event and said she could not at all believe her first film won so many awards. 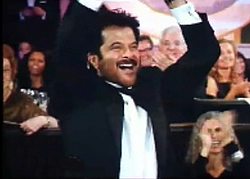 Anil Kapoor was given the role after it was offered to Shak Rukh Khan and Amitabh Bachchan. Danny said that SRK was helpful but was just too busy for the dates of his film. Danny could not wait and  Anil was available so the role was his. At the cermeony, Anil Kapoor was completely awed by the event and wins. He jumped with joy and applauded when being thanked by Danny for his part in the film. He said that this was a huge step for Bollywood and Indian cinema to be recognised at this level as it would now provide a platform for future films He felt this was a once in a lifetime opportunity and was very happy for A.R. Rahman.

Amongst some of Hollywood’s biggest stars such as Brad Pitt, Angelina Jolie, Tom Cruise, Leonardo DiCaprio,  Tom Hanks,  Sean ‘Diddy’ Combs, Jennifer Lopez and many more, watch the clip when Danny Boyle gets his award at the 66th Annual Golden Globe Awards for Slumdog Millionaire, in the video below.

Shah Rukh Khan was also at the prestigious event and was joined by Freida Pinto on stage, to present a brief overview of Slumdog Millionaire and an exciting clip from the movie.  SRK gave a big thumbs up to to Danny and the team of the film for making the film.

Amit enjoys creative challenges and uses writing as a tool for revelation. He has major interest in news, current affairs, trends and cinema. He likes the quote: "Nothing in fine print is ever good news."
Shahrukh and Aamir boost Bollywood
Chandni Chowk to China Premieres